John Grisham’s epically entertaining Camino Winds is a perfect antidote to the pandemic. 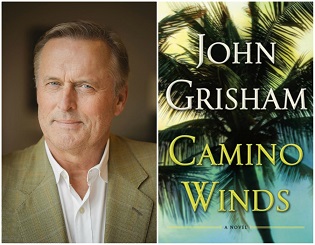 James Harden’s step-back three-pointer is his bread-and-butter shot, and it’s made him the NBA’s number-one scorer. He shoots it often and, most of the time, good things happen when he does. He has other talents on the court — drawing fouls, sinking over 85 percent of his free throws, finding open teammates, and playing good defense — which, when combined with his signature shot, make Harden a complete powerhouse player. His major and less-major skills have positioned him to receive salary and endorsement deals that leave him a very rich man.

John Grisham is to fiction writing what James Harden is to basketball. The author’s bread-and-butter book is the legal thriller, and, like clockwork, he puts one out in the fall of each year. Immediately, it hits number one on bestseller lists and stays at or near the top for a long time.

Like Harden’s other on-court skills, Grisham successfully traverses other writing territory outside the boundaries of his legal novels. Covering different realms has enhanced his stature, and his non-legal books have also been blockbusters.

Selling mass quantities of books in such a wide variety of genres makes Grisham a complete powerhouse writer, and, like Harden, his virtuosity has earned him wealth — a proper reward for those with the talent, discipline, and ambition to rise to the top of their fields.

Grisham apparently enjoyed writing for the beach crowd so much that he’s now delivered a sequel to Camino Island. Just as in 2013, when he revisited criminal defense lawyer Jake Brigance 25 years after A Time to Kill and brought him into another gut-wrenching trial in Sycamore Row, the novelist takes Camino Island protagonist Bruce Cable, the center of the social whirl in the fictional Florida town of Santa Rosa, and puts him in the middle of a murder in Camino Winds.

Normally, living near a beach makes for a relaxing lifestyle. Until there’s a hurricane. Then all hell breaks loose. Big trees and telephone poles blow down, homes flood, roofs fly off, powerlines snap, boats break from their moorings, and, invariably, people get killed.

Turns out, the most frenzied moments in such chaos are the perfect time for an alluring professional hitwoman to take out her target and make it look like the decedent died in the storm. Since Bruce Cable owns Santa Rosa’s leading bookstore and socializes with the many authors attracted to the area, he naturally knows the victim, a writer who’d been hard at work on a fact-based novel that reveals the secrets of a corrupt business profiting off Alzheimer’s patients. (To keep from spoiling readers’ fun, no further aspects of the plot will be revealed.)

In Grisham’s deliciously entertaining books, the fast-paced plot is always the entree, though he fills out the menu with extras that enhance the meal. Among the side dishes in Camino Winds: a steady stream of humorous digs (to name a few targets, Grisham puts quick knife twists into oil companies’ pricing practices, breathless on-the-scene news reporters, Donald Trump’s shady business tactics, and Florida’s abysmal death-penalty record); intermittent commentary on little-known aspects of the writing business; quick plot summaries inserted into the dialogue that help readers follow the high-speed storyline; and a deft interweaving of the plot and characters from Camino Island into the flow of the sequel.

My personal favorite of these extras is Grisham’s method of setting up bad actors for cataclysmic falls. One moment, an evildoer has the world by the tail — savoring the afternoon delight of illicit sex, soaking in the glow of a spring day while preparing to watch a young son play baseball, or jet-setting around in a private plane with a hot-to-trot young woman in tow. In these moments of sheer bliss, the characters believe that life is so…so…so…blessedly fantastic! And then, in a nanosecond, it becomes not just bad, but suicidal-despair bad.

The reader will surely smile, and may even laugh out loud, at these climactic scenes when bad things finally happen to bad people.

For a nation locked down at home in the midst of the coronavirus crisis, and thus desperately in need of diversion, John Grisham’s Camino Winds more than fills the bill. With each page, tension grows amid circumstances black, white, and grey. And the author’s pacing is just quick enough to stay two steps ahead of a grateful audience reading as fast as it can.