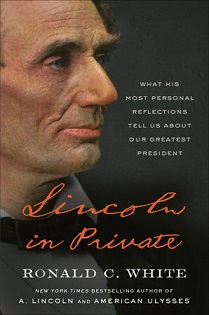 A good writer knows to choose language that fits his audience. Short, familiar words that go straight to the heart of a matter work best for simple folks, while a larger vocabulary that enhances nuanced points appeals to the highbrow crowd.

This rule of thumb holds true even when the person with the pen is writing to himself and wants either to capture ideas before they slip away or address a subject with more precision before he goes public with his opinion on it. Though the penman in this situation writes for an audience of one, he doesn’t want to insult his own intelligence and will typically refuse to walk away from his desk until he knows his words reflect his best thinking on the topic at hand.

As covered in Ronald C. White’s intriguing new book, Lincoln in Private: What His Most Personal Reflections Tell Us About Our Greatest President, this pen-to-paper, idea-holding, rigorous-reflection exercise was common practice for our 16th president.

Because no businessperson thought to manufacture bound tablets or legal pads during his lifetime, whenever Lincoln had an epiphany or wrestled with conflicting perspectives until he could pin them into a permanent hold, he often wrote his thoughts on scraps of paper that happened to be nearby.

After achieving closure on his written meditation of the day, he would then put the fragment in a drawer or coat pocket so it would be “at the ready as he tackled thorny issues over and over again in the weeks and years to come.” Since these jottings were for his eyes only, many weren’t discovered until after his death.

White has now studied the life and words of Lincoln for three decades. In the opinion of this reviewer, the author’s cradle-to-grave biography of the late commander-in-chief, A. Lincoln, is the best of its kind. He’s also written two books devoted to the eloquence and power of Lincoln’s speeches that drilled deep into his subject’s potent, often poetic prose that had historic impact and not one word of surplusage.

For this latest work, White reviewed the 111 surviving fragments that contain Lincoln’s thoughts to himself (all of which appear in the book’s appendix); selected what he believes to be the 10 that “reveal new and interesting things about him”; and then explored the probable context in which each was written, as well as its content. The final product is a valuable addition to Lincolnian scholarship — no small achievement given that over 16,000 books have been written on the man.

Lincoln’s mind was by no means an open book to those around him. His close friend Judge David Davis traveled the Illinois legal circuit with Lincoln six months a year for two decades and concluded that the tall guy in the stovepipe hat was “the most reticent, secretive man I ever saw or expect to see.”

Lincoln’s peers enjoyed hearing the wide variety of opinions and stories that came out of his mouth, but they couldn’t begin to conceive of his intellectual sausage-making. Until now, the process of how his ever-evolving views were transformed into final conclusions was something of a mystery.

Coming down on one side of his era’s many controversial, complex issues wasn’t easy for a person of Lincoln’s intellectual honesty. Many angles had to be measured and then compared to others before he felt comfortable drawing his line in the sand — though Lincoln knew he’d be ready for prime time upon the arrival of the moment when he’d have to make his case in conversations, debates, and speeches.

The adjective which best describes Lincoln’s fragmentary reflections is “logical.” Even when his musings on certain subjects became lyrical or spiritual, his thoughts were always loaded with logic. Hence, when making notes to himself, the logical writer had to satisfy his logical reader by giving his best effort at expressing logical thoughts.

Whenever Lincoln focused on a topic upon which reasonable minds differed, he knew one perspective necessarily had to be more logical than the other. After determining in private which side that was, he would later add the eloquent bells and whistles that would make his final stated position more memorable.

To develop his powers of logic, Lincoln repeatedly pored over Euclid’s 13-volume textbook on geometry, Elements, which provided detailed instruction on the process of deductive reasoning (e.g., first considering a subject with simple axioms, and then building on those axioms via systematic reason and sometimes “proof by contradiction” to develop intricate theorems as unassailable as their building blocks). Among others, White offers these examples:

In his epilogue, White encourages readers not only to peruse Lincoln’s private reflections, but also to adopt Father Abraham’s habit of writing notes to oneself in a quiet room and then preserving them for later use. As every generation finds its own grounds for admiring Lincoln, Ronald White has found a new angle that provides one more reason to sing the man’s praises: His notes-to-self practice provides a means for thinking with more clarity.

John Grisham’s epically entertaining Camino Winds is a perfect antidote to the pandemic.