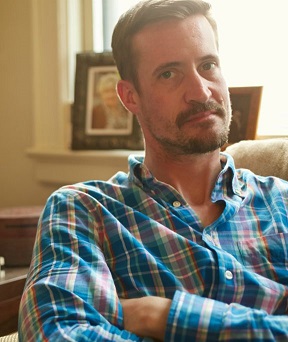 Philip Dean Walker understands how to craft short fiction that compels and provokes. His first collection, At Danceteria and Other Stories (Squares & Rebels, 2016), was named a Kirkus Best Book of 2017, and his second collection, Read by Strangers (Lethe Press, 2018), was recently selected as a Kirkus Best Indie Book of the month for October. It was a pleasure to have the chance to chat with Philip about his new collection.

Why are you drawn to the short-story form? What are its challenges, its joys?

Some part of me used to think that writing a short story was easier than writing a novel. Novel writing is so daunting! There are so many pages and characters and you have to keep the reader interested for a huge swath of time. I was always fearful that I didn’t have a novel-length idea and so I stayed in my short-story comfort zone. But since graduating from my MFA program, I’ve come to the conclusion that stories are challenging, perhaps even more so than novels. You have to grab the reader from the first word in a story. You need to sketch and define characters quickly — there aren’t pages and chapters to build them. Dialogue becomes even more important because it has to do so much work. And when does the story end? The joys: I’ve always been attracted to the short story because of its sheer number of possibilities. There’s so much room to experiment. And if the experiment fails, oh well. The story is probably already over before a reader has figured that out.

Even though Read by Strangers contains different styles and approaches, it’s a thematically tight collection. Did you conceive of it as a unified collection, or was it a more organic process?

It was more of an organic process. I always thought this group of stories was too varied to be considered thematically tight. But when I started organizing it after I knew it would become a book, I began to see how many characters mirrored each other and spoke to each other. For example, I noticed that an older, somewhat failed actress character has emerged in three stories, all approaching that archetype from a different place and through a different lens. I don’t consider myself to be devoted to writing one type of character, but the sheer number of female protagonists in this book stuck out to me as significant. I wanted to arrange the stories in a way that told a larger story — the challenges of being human, of connecting with other people in a meaningful way.

The collection is approachable for readers while, at times, taking risks through stylistic or formal experimentation. Was there a story that opened up because you decided on a nontraditional approach? In contrast, did you ever find experimentation frustrating?

My story “A Goddess Lying Breathless in Carnage” pays homage to the opening of Rick Moody’s Purple America in its form and structure, and was definitely an experimental piece. The repetitive phrase that hinges the piece together became this battle cry for a man obsessed, and its steady escalation throughout the piece helped me go to some of the darker recesses of the solitary mind that I needed to in order to make the story work. I never find experimentation frustrating. It’s liberating to me, and I feel at home taking risks.

Read by Strangers begins with kids trespassing in an abandoned house. Many of your characters are literally and figuratively crossing boundaries. Is this a theme that comes up in your work a lot?

It does, yes. I love to take characters up to red lines and see how or if they will cross them.

So many of your stories have emotionally complex, open endings. How do you know when to end a story?

Many readers have said that about Read by Strangers. Endings are hard to nail, and writers never feel quite comfortable with their ability to land them. Even when you think you already know where a story is going to stop, sometimes the characters emerge off the page and declare, “No, not yet. I have more to say and one more thing to do.” The ending of “The Gargoyles” in Read by Strangers is so troubling because the main character has gone up to that red line we discussed earlier, perhaps crossed it, and the story ends without you finding out if there is any fallout from that decision. I’m surprised more readers aren’t annoyed about how I ended that story. The idea of not knowing what has happened is more in keeping with the tone of the book.

The collection has a blend of stories about straight and gay people. As a gay man, do you ever feel pressure to write gay characters? On the other hand, do you ever experience trepidation when writing straight characters?

I have to answer “No” to both of those questions. I have never concerned myself with, “Ooh…am I allowed to write from this person’s perspective? Do I have permission to tell this story?” If you tell the story well and the language sings its narrative to the reader, isn’t that all that matters? I feel comfortable writing gay characters because I can understand that life. But I enjoy delving into the female psyche, which is so complex and rich with narrative possibility. Writing strong, interesting women is thrilling. They’re thrilling to read about, as well.

What writers do you feel most influenced this collection — or your writing in general?

I’ll list the authors and the books that were influential to this collection: Mary Gaitskill (Bad Behavior, Two Girls, Fat and Thin), Richard Yates (The Easter Parade), Toni Morrison (Beloved), Jennifer Egan (A Visit from the Goon Squad), and Wally Lamb (She’s Come Undone). The last book in particular had a real influence in giving me permission to write from perspectives that are not my own. I’m truly honored that Wally agreed to blurb Read by Strangers.

I’m working on a follow-up collection to my first book, At Danceteria and Other Stories. I’m also writing a novel.

John Copenhaver is author of the historical crime novel Dodging and Burning (Pegasus, 2018). He writes a crime fiction review column for Lambda Literary called “Blacklight,” and is the four-time recipient of Artist Fellowships from the DC Commission on the Arts and Humanities. He’s a Lambda Fellow and has completed residencies at VCCA, VSC, and Ragdale. He’s a Larry Neal awardee, and his work has appeared in CrimeReads, Electric Lit, Glitterwolf, PANK, and other publications. He grew up in the mountains of southwestern Virginia and currently lives in DC, where he chairs the 7th-12th grade English department at Flint Hill School.

Masha Hamilton is currently working in Afghanistan as Director of Communications and Public Diplomacy at the US Embassy. She is the author of five acclaimed novels, most recently What Changes Everything.