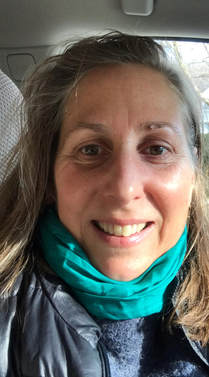 Julia Bisette is a 15-year-old brainy girl who finds herself in Washington, DC, ostensibly to attend a conference where she is a finalist in a STEM competition to encourage the nation's young innovators. But, instead, she skips the event to travel around the city on her own.

While touring the monuments, she meets Kal, another finalist ditching the conference. Kal wants to discover the fate of his grandfather, a pilot during the Vietnam War who flew secret missions over Laos. He searches the long, black V shape of the Vietnam Veterans Memorial for his grandfather's name, falls asleep, and is discovered by the police.

Kal learns from the officer that his grandfather was a “Raven” who served admirably but was not listed as MIA. Julia and Kal decide to solve the mystery of the missing pilot. In the process, they discover mysteries about their own lives.

Laura Scalzo’s debut coming-of-age YA novel, The Speed of Light in Air, Water, and Glass, draws on Julia's fascination with fractals — successively recurring geometric patterns — which she finds in coastlines, snowflakes, and Washington's budding cherry trees. Julia describes fractals as a "thing that's itself over and over again," and adds, "Fractals are the science of jagged edges."

Self-absorbed and unsure of herself, Julia personally feels rather "jagged." She attempts to fix her problems and soothe her fears with fact-based analysis. She searches for meaning in the sayings of patriots like Abraham Lincoln and Thomas Jefferson, and among the equations of Albert Einstein.

She wonders about her parents. Her divorced father leaves DC after one afternoon of their scheduled week's visitation; he pays for her to stay alone at the Hay-Adams hotel. Why couldn't he stay longer? Julia meets a Japanese princess in the hotel lobby, and they strike up a friendship. Together with Kal, the three young people plumb the peculiarities of their lives.

Putting together their individual stories amid the nation's monuments, they sense a wider purpose in their lives. Julia decides that her existence does not have to be a fractal. "I'm not myself over and over again." she asserts, realizing that her own creative thinking and willingness to share her life with others can lead to wider meaning and understanding. It’s this realization of individual value that author Scalzo wants to impart to young readers everywhere.

Why did you write this book?

I wanted to write something that both parents and teens could read and then share and discuss.

Is Julia a millennial?

Yes. One of the themes in this story is that parental love gets expressed through the push for achievement. Julia is a millennial who's been given opportunities — classes and good schools and chances for "achievement." She functions with a certain underlying anxiety because with the opportunities come expectations. I think that's very typical. She is named after a "Julia Set,” a kind of fractal with a mathematical disturbance. Julia's trip to Washington changes the self-similar pattern of her life — and a wild design emerges. That's the metaphor. The theme of fathers and daughters is also part of the story; even more so, missing fathers. It wasn't until my dad died that I could fully understand his unconditional love.

You live in Washington, DC, yet your descriptions of Julia's impressions of the monuments are fresh. Did you tour the city when writing this book to note details?

I did make some special trips to research the book — the Archives, for example. Besides the documents, it is incredible to see people from all over the world, in every kind of dress, converging in that space to look at what those documents represent: freedom. I want to say that the idea that someone would call this city, so filled with art and history, poetry, and beauty, a "swamp" is abhorrent to me. We'd moved to Washington, DC, in 2004, and everywhere you went, there were young men and women home from war with metal legs and arms, shaved heads, and scars. I had trouble reconciling this with the beautiful monuments, memorials, and masterpieces hanging in the museums. In the end, all I could think of is their stories, whatever they were, mattered more than any of the rest.

This is your first novel. Are you planning a next project?

I'm pulling threads together. The only thing I'm sure of is it will be an adult novel.