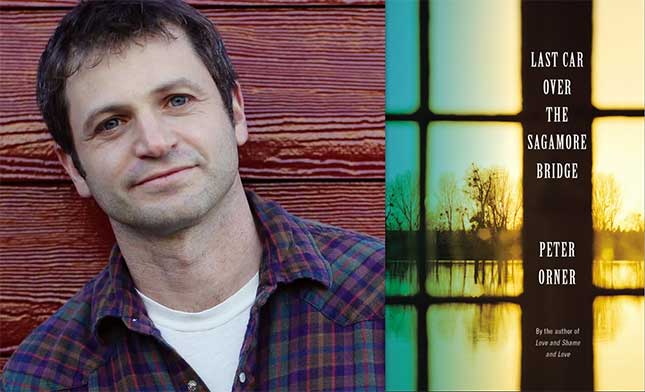 In Last Car Over the Sagamore Bridge, Peter Orner zeroes in on the strange ways our memories define us: A woman’s husband dies before their divorce is finalized; a man runs for governor of Illinois and loses much more than an election; two brothers play beneath the infamous bridge at Chappaquiddick. Employing the masterful compression for which he’s become known, Orner presents a kaleidoscope of individual lives viewed in startling, intimate close-up.

Read our review of Last Car Over Sagamore Bridge

I loved reading Love and Shame and Love and your thoughtful responses to my questions about the novel. One of the things I loved and found so interesting about it was your “snapshot” writing style. The small chapters were reminiscent of short stories. What made you decide to write Last Car Over Sagamore Bridge as actual short stories? Some of them are so short, I would call them snippets. How do you decide what to include and what not to include? Are short stories your preferred writing method?

I’m less hung up on the form, of the what something is, than I am on whether the piece — whatever it is — is working or not. I think there might be too much focus on what people call genre, rather than: does it have emotional impact? This is really the only question for me. A novel or a short story? Story is the key for both, whether very long or very sad. That sad was a typo, but I kind of like it. Let’s leave it. This said, I tend to like to do more with less, whether I’m writing a story or a novel.

The blurb on the cover of Last Car refers to your “masterful compression.” Certainly, that is true. You are a master of compression and can convey a depth of emotion with very few words. Can you speak to this at all? I feel it is more difficult to accomplish than writing 1,000 pages of rambling prose. How are you able to tell a story readers will care about in only a few pages or even an extended paragraph?

I appreciate the question very much, but again, I’d say I’m more moved by The Brothers Karamazov, a lot of words, some of them even rambling, than I am by, for instance, a bad very short story. The question of whether or not readers will care really depends on the reader. People sometimes ask me who I write for, and I always answer that I write for the dead, the forgotten. Wishful thinking that they can read wherever they are, but I like to think they can.

Short stories are short, but they aren’t necessarily easy. I found I had to continuously reread. And, I needed to take some time between most of the stories. I couldn’t sit down and read the work cover-to-cover on a Sunday afternoon the way I might with a novel. Is it the plan for readers to experience the work in this way? Slowly? Contemplatively?

Absolutely. Slowly … Short doesn’t mean a fast read, at least to me. I write to be reread. And I write, with the hope that a story will resonate beyond the story. Know what I mean? My ideal reader would be someone who reads one story and then puts the book down and wanders around outside and notices things about the world they hadn’t noticed before.

Most of the stories in the collection deal with death. Death is certainly a fact of life. None of us can escape it. Do you believe that death is the ultimate magnifying glass? That the death of a loved one, or even contemplating our own death, forces us to consider what is missing in our lives? Should we be learning something from each person’s death just as we learn something from each of your stories?

I wish I had something as profound to say about death as you do: it does force us to consider what is missing. It can feel pretty overwhelming, can’t it? Think of our own deaths, the people close to us, and then look around at someone else, their deaths, and then someone else, theirs … It’s this endless and frightening but also beautiful chain. Because in those deaths are the memories we carry, and it’s memory, I think, that gives our lives layers of meaning that we are constantly trying to parse. A friend of mine who happens to teach yoga once said to me that I don’t live enough in the moment. I said, “Exactly.” But seriously, how can we? Yoga is very nice, I’m told, but it doesn’t do away with the problem of death.

In one story that haunts me, a mother receives a call informing her that her son has passed away while serving a prison sentence. His was a life cut short. A life wasted. And, his poor mother! As a reader, my heart certainly went out to her. What do you hope readers will think when they read this? For some reason, it seemed more sad to me than a story about a child who accidentally drowned in a pond, even though, as person, I feel I should care more about a child than a criminal. Why?

Maybe it’s because the guy in prison is still a mother’s child. And the barbed wire and all the wires kept her from touching him before his death.

Most of the stories are told from a male point of view. Do you prefer male main characters? If so, why?

I hadn’t noticed this. In other books I think I’ve skewed toward woman’s point of view. So maybe I’m just trying to mix it up. I think my main subject is loneliness which, for me, isn’t really related to gender, just about being human.

One of the handful of stories told by a woman is also one of the most disturbing. Stace tells us of a man she previously lived with who died. The story is suspenseful and spooky. Like us (the readers), the person to whom she tells the story wants her to stop. But she has to finish. Why does she need to tell this story? It ends with her telling her listener, “Don’t touch me. I said don’t touch me.” So, she needs to tell the story, but she resists any comfort? She does not want the story to create any intimacy between her and the listener?

Hard for me to say since in so many of these stories I’m just watching these people do things in my head, you know? But I do think that sometimes people just want to be heard not comforted. Listening is often so much harder than comforting.

You titled the second section of the book “The Normal,” yet the stories contained therein deal with terrible murders, accidents and tragedies. We like to think of these things as aberrations, but are they really more normal than we care to admit? Do we only feel comfortable calling things “normal” if they are pleasant? How should we define something as normal?

I do think the horrible is normal; wish it wasn’t.

I really wanted to find the “bow” that would tie all these snippets together. There isn’t one, is there? Like life, not everything is connected. Things don’t always have a happy ending.

In general, I try and avoid bows, even on presents.

Mandy Huckins holds a Master of Arts in English from the University of Charleston in South Carolina. She recently moved to the Washington, D.C., area with her husband, an Air Force officer. When not reading, Mandy works for the Combined Federal Campaign-Overseas, which provides uniformed service members and DoD civilians serving overseas the opportunity to make a charitable contributions to one or more of over 2,500 different organizations.