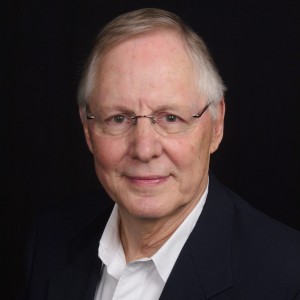 Larry Matthews, author of Detonator, the latest Dave Haggard thriller, talks about being a news reporter in Washington, DC, the people he has known, and using the capital of the United States as a character in fiction.

What prompted you to launch the Dave Haggard thriller series?

I suppose Dave is a kind of alter ego. He is a street reporter for a broadcast outlet, and so was I. I covered Washington news for several decades going back to the riots and the anti-war years. The city was at a low point then and was exposed to very interesting and odd people. I also spent time with police officers of all stripes. That gives me material for the series. In addition, I get to insert some “inside baseball” stuff about the news business and the relationship between reporters and their sources.

In the series, you use what you call “cameo appearances” by real people in your stories. How were you able to swing that?

I got to know many men and women in radio and television and I thought it would be fun to bring real people into the stories. No one has turned me down. In Detonator, I have cameos from Wendy Rieger at Channel 4, Dave McConnell at WTOP, Charley Steiner, Vin Scully’s relief behind the mike for the L.A. Dodgers, and my old friend and colleague Johnny Holliday, a legendary broadcaster in the Washington area. I’ve known them all for decades. They were very generous to lend me their names.

One of the factors that makes the Haggard thrillers so engaging is the realistic detail — actual places, real streets, towns we know and recognize — that you weave into the narrative. How do you do it?

I use place as a character. I know Washington and I use locations in the city for meetings and so on. The underlying tale in the Dave Haggard thrillers is the city itself, and I use the monuments, the Capitol, and other spots for meetings and intrigue. No matter how long I’ve lived here (some 50 years), I never get tired of this place as a major world capital and as the center of our democracy, as flawed as it appears at times. Drive down Constitution or Pennsylvania Avenue at night and you will see what I mean.

It must take time to write the Haggard thrillers, yet they feel current to the moment. For example, the mention in Detonator of the Islamic State’s progress in the Middle East. How do you achieve that?

That was serendipity. The I.S. was in the news, and I used it. I want the books to have the feel of the times in which they are published. Detonator is about terrorism and hatred and how those who are protecting us go about their work. Maybe things don’t go as planned, but, as we’ve seen with the Secret Service recently, we have an open system, and the people will know the truth sooner or later. That’s where Dave comes in. Gee, maybe I should think about a Secret Service story.

Dave Haggard has now been through two girlfriends. Will he ever settle down and get married?

Actually, he’s only been through one (twice), and he seems to have an issue with commitment. I don’t know his marital future. Street reporters tend to have checkered personal lives.

The writerly craftsmanship you demonstrate in your fiction is of a very high level. How and where did you learn to write?

I learned to write as a reporter. The old joke about daily journalism is, “You don’t have to be good. You have to be fast.” We all hope we are good and fast. Deadlines always trump rewrites. I was fortunate in that I witnessed major events of historic importance and I sought ways to honor the drama of the moment. And I spent time with some very odd and interesting characters, the police on the street among them. I had high-level sources in the DC police department, and they gave me insight into how the people in the department functioned and thought outside the press releases coming from Indiana Avenue.

One of the highlights of Detonator is the clipped and cynical dialogue. Do you use some kind of a formula to make it work so well every time?

Well, I hope it works every time. I try to give it the tone of real conversations among the people I write about. Cops, for instance, tend to be as cynical as reporters if they have been on the street for a while. And in a city of politicians who have a very high level of self-esteem that is not always justified, it’s easy to feel that everything they say is coated with a bit of self-interest. I have interviewed and been friends with a number of members of Congress and I think I have an ear for what they would say under the circumstances I present in the books.

The characters in the thriller series feel so real that I keep thinking they’re based on real people. Are they?

I think most writers would admit that their characters are based, at least in part, on real people or composites of people they know or have met. The characters in Detonator fall into that category. Dave is a bit of me and many other reporters I’ve known. Sid, his boss, is the old lion of the newsroom. Brad Parks, the bestselling author of many thrillers and a former newspaper reporter, says of Sid, “I know that guy. I’ve worked for him.”

As much as I enjoy your Dave Haggard thrillers, my favorite among your books is Take a Rifle from a Dead Man. Talk about that book.

Take a Rifle from a Dead Man is a fictionalized version of my father’s life. He led an extraordinary, if difficult, life. He fought in three wars and spent five years as a Cold War spy. This after a very difficult childhood in the Appalachian South in the 1920s and as a teenager riding the rails during the Great Depression. His service in World War II, Korea, Vietnam, and as a spy in Europe in the 1950s left him a broken man. His actions were the stuff of movies, but in real life, the things that we as a people ask men like him to do take a horrible toll. He spent the last two decades of his life drinking himself to death. The cost to my mother was terrible. Some military families are enduring such experiences right now. That is the message I want to convey in the book.

You now have published nine books. What’s next?

I am writing the fourth Dave Haggard thriller now. It’s called Nine Millimeter Afternoon and it’s about human trafficking. As in the others, Dave is involved in a story that costs him dearly. The plot involves very high-level members of the government who are buying and using trafficked women.

Your books are all over the map; you write about so many different things. I’m sure more thrillers are in the offing, but what about long-term goals? What books do you hope will be in your future?

I am searching for a nonfiction topic to write about. I’m all over the board about it. I’m an older man, so I’ve looked into issues of aging and Baby Boomers. That topic seems to be pretty well covered, and I don’t know what I could do that others haven’t.

As for Dave Haggard, he’s got more adventures ahead. I am very fortunate in that I have found that the upper levels of the writing community are very open and welcoming. I have made friends who are mega-selling authors, and they offer advice and counsel. I hope I can make each of my books better than the last one. My great hope for Dave Haggard is that he can provide a few hours of page-turning entertainment for my readers.

Tom Glenn is the author of Friendly Casualties, No-Accounts, The Trion Syndrome (to be published by Apprentice House of Baltimore in late 2014 or early 2015), and prize-winning short stories. He spent the better part of 13 years in Vietnam and escaped under fire during the fall of Saigon.