An Interview with Genevieve Grabman 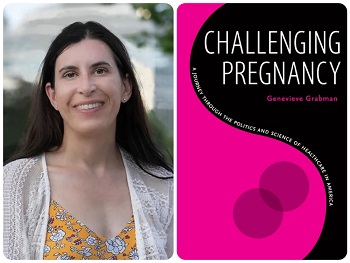 From the moment Genevieve Grabman, a Washington, DC-based attorney and public health advocate, learned she was carrying identical twins, nothing about her pregnancy was routine. Her twins were diagnosed with two rare and dangerous conditions: twin-to-twin transfusion syndrome, in which one twin “donates” blood and nutrients to the other, and intrauterine growth restriction, in which the donating twin has a smaller share of the placenta. Facing an 80-percent chance that neither would survive, Grabman sought out various medical treatments to save their lives.

However, she found her options repeatedly limited by anti-abortion laws and a political climate that has left doctors and hospitals unable or unwilling to carry out procedures that pose any risk to a fetus. With the Supreme Court set to hand down its decision on Dobbs v. Jackson and likely overturn Roe v. Wade, Grabman argues in her new book, Challenging Pregnancy: A Journey Through the Politics and Science of Healthcare in America, that everyone who cares about pregnant women needs to understand how anti-abortion policies diminish healthcare for women, especially those with challenging pregnancies.

You had a lot of “holy crap” moments in this pregnancy. Which stands out most?

The moment I found out I had twins. Sometimes in a pregnancy, people think they’re going from one to zero. Or, one to two. I went from zero to two!

I dropped the F-bomb on my poor OB-GYN. And I then had to apologize to her. Because one should not do that in polite company.

The book is filled with examples of how you could not get the care you needed because of anti-abortion laws or doctors’ fears about them. Give us an example.

I finally found a doctor who was willing to help me [with laser ablation surgery, which would cauterize the blood vessels between the two amniotic sacs and improve the odds of survival for both twins]. He was the most preeminent fetal surgeon in the world. He asked if I could get to Miami right away. But a day later, he called me, angry. The hospital ethics board, kowtowing to the anti-abortion movement, had decided that he could no longer perform this surgery because there was a risk of death to one of the fetuses, a risk I was willing to take to try and save their lives.

You wrote this book when you had three children under the age of 5 and a full-time job. What made you go from thinking, “I should write this,” to sitting down and actually doing it?

I had spent so much time and effort doing the research that it seemed silly to let that research never help anybody else. And by the time I was writing the book [in 2019], you could clearly see that what had been a 30- or 40-year plan to overturn Roe v. Wade was being brought into action. If I were not to speak now, I was about to lose the ability to have any way of influencing the discourse.

The book is a mixture of memoir, science, and politics. Why include all three?

I didn’t want to write a straight memoir. I was not interested in telling my personal story. My goal was to tell the story of the science and the politics and the interplay between those two. The fact that the goal was achieved by centering those themes around my own pregnancy was more a rhetorical device than anything else. The book has gotten some criticism around that. I’ve been asked why I didn’t delve more into my emotions around the story. That wasn’t what I was going for.

We have scary new abortion laws in, among other places, Texas, Florida, and Oklahoma, with more states sure to follow. What do you see happening if Roe is actually struck down?

We’ll have one America where pregnant people will be treated as fully human and who can be partners in their healthcare. And we will have another America where pregnant people are basically chattel. Their wishes matter not, their bodies matter not, their agency matters not. And it won’t change until we get back to a pre-Roe state where we have emergency rooms filled with teenagers dying of sepsis.

How do you stay optimistic?

I’m not feeling hopeful about the outcome of Dobbs v. Jackson. But I will say that many of my great friends are women in their 70s and 80s — women who fought for us because they saw their friends dying [from illegal abortions], what their friends had to go through to get an abortion. So, when what seems inevitable happens, there’s going to have to be a new generation of women who will rise up. I think they will. This time, it won’t just be women. We have a better understanding of gender and gender roles. It’ll be a multi-decade fight.

How do you hope to effect change with the book?

I’m asking for folks to consider the local and state aspects of healthcare larger than abortion, to consider laws and policies that are supposed to restrict one type of healthcare but that have ramifications beyond that. Because when you drain the pool of doctors who have been trained to assist in a wanted, high-risk pregnancy, we have no one left to help. And that can’t be what we want. We also don’t appreciate the extent of the Catholic takeover of the Supreme Court. As a Catholic, if I fail morally vis-à-vis my church, let [my church] address that. But it shouldn’t be a national or state government that enforces a religion upon me and penalizes me for not being a faithful adherent to it. And that’s what we’ve set up in this country.

Diana Friedman’s fiction, articles, and essays have appeared in multiple publications, including Newsweek, the Baltimore Sun, Huffington Post, New Letters, and Whole Earth Review, among others. She is the director of Pyrenean Writing Retreats, a retreat center whose mission is to nurture and support writers.

An Interview with David O. Stewart

The novelist talks trilogies, family history, and the unending allure of the past.

Given unprecedented access, thousands of pages of once secret documents, and hundreds of interviews, Garrett M. Graff takes us inside the FBI and its attempt to protect America.