An Interview with Andrea Hollander

The award-winning poet’s new collection chronicles the breakup of her marriage and reshaping of her life afterward. 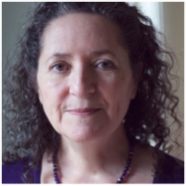 All poetry reveals the life of the poet, but Andrea Hollander’s Blue Mistaken for Sky is a closely linked collection depicting her journey during and after divorce. The poems’ titles make clear her struggles — for example: “Living Alone at Sixty-Four” or “As If Written by the Other Woman.” Of her many deeply personal works, this book digs the deepest. She and I corresponded recently about it.

This book grew from grief and rage at the destruction of your marriage. A good marriage that turned out to hold a terrible secret. How did you winnow those feelings away from the personal and toward the universal? Did you write at a hot heat and then edit, or wait until you personally had distance?

I believe that the universal comes from the personal, and not vice versa. When a poem succeeds, it does so because the experience evoked is one with which readers are able to empathize. The reader “becomes" or is in sync with the poem’s speaker for the duration of the poem in a way not dissimilar from the way readers experience a good novel.

Although it would seem otherwise, I never set out to write about a particular experience. I’ve learned from almost 50 years of writing poems that my best work will come when I have no wish to say or explain or even directly explore something.

For me, drafting poems is a form of writing practice, the operative word being practice. I don’t expect a good poem to emerge. When a promising poem makes a turn I didn’t expect, I know I have something worthwhile to work with. Then I begin to edit both immediately and over a period of days or weeks, sometimes even months. I put the poem away, take it out, read it aloud again and again, put it away, and so on, making adjustments as I recognize problems or improvements.

A poem experienced as a novel: Your collection seems exactly that — a journey enhanced by beautiful language. I want to ask about the middle section of Blue Mistaken for Sky, where you take the reader back to your parents and your early life, telling stories which resonate with the poems about your marriage. Was this planned or did it emerge in the process of writing?

Poems in the middle section cover experiences that also emerged in my previous books. Perhaps we’re never finished with material from our earlier lives. While I might have thought Been there, done that, move on, none of these new poems examine old matters in the same ways. Isn’t this what we all do — refocus our gaze upon past experience with enlightened insight? We want to know who we were then that contributed to who we are now.

In assembling the present volume, at first I arranged the poems chronologically, but thanks to my excellent editor at Autumn House, who objected, I reorganized the book to begin in medias res — after the divorce when I’m already in my new life. The middle section, then, invites readers to consider occurrences that perhaps played a part in what happened later.

The arrangement definitely worked for me. One thing that intrigued me about the poems was a lack of anger. There's a can of gasoline and the shriek of a saw, but even in the pieces such as “Aren't You Tired of Thinking About Him," rage seems buried, though I imagine you were shredded with it. Did I miss it?

I was indeed devastated when I discovered my husband’s secret life, and I responded as one would expect. I also got an excellent therapist. But art is not life. And although these poems are about my life, my job as a writer is not to describe experience so much as it is to evoke it in readers. There’s a thin line between revelation and retaliation, and I took care not to cross it. Nor did I wish readers’ pity. Many worse things befall other people.

Given the anger, pain, and retaliation in the current world, I love your answer, and the fortitude it displays. In a lighter vein, could you tell us something surprising about writing poetry?

Perhaps this will not be surprising to other writers: There are occasions in which I work very hard and long on one poem that never makes it out of my notebook, only to find that the next poem I draft seems to write itself, which feels like a reward for having made so much effort on the failed poem. This happens so often that I’ve come to believe that the new poem’s success is no accident, but is rather the immediate result of the work done on the failed poem.

You write of "selling the crystal glassware and the green couch, /even the desk I’d saved so long to buy…" Do you have a desk to replace it? Write by hand with a special pen? Munch on chocolate or drink tea?

I have always drafted my poems by hand in a spiral-bound notebook containing college-ruled pages, and on one side of the page only, and always with a fountain pen. After my son brought me a Waterman from France in 1998, I’ve used it exclusively. Mostly I write at my dining table. No snacks, no tea. Just a comfortable place in my apartment.

Terri Lewis is a writer with lots of submissions and lots of hope. She lives in Washington, DC, with her husband and two dogs.

The first of a trilogy, Jonathan Holt's The Abomination is a riveting, well-written conspiracy thriller.