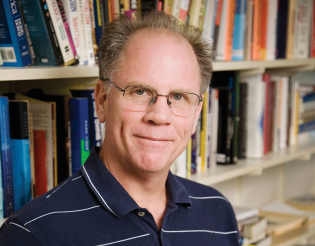 Professor Robert W. McChesney — along with co-author John Nichols, national affairs correspondent for the Nation — brings an interesting mixture of anger, dread, and optimism to his new book, People Get Ready: The Fight against a Jobless Economy and a Citizenless Democracy.

In the book, and in conversation, McChesney speaks with measured hope about how the media can better serve the public, how populist anger can be channeled in more positive ways than Donald Trump, and why criticizing college students for not knowing who won World War II is missing a much larger point. We spoke last month.

Let’s start with the media in this current election cycle. The far right says the media lets Hillary get away with everything, the far left says Trump is a creature of the media because he’s good ratings. What about the argument that the media must be doing something right if everyone is angry with it?

No, I don’t think that makes a lot of sense. The media’s job isn’t to anger people, it’s to engage people. It should leave people more informed and more likely to participate effectively. I don’t think pissing off a lot of people on the right or left is the goal of media.

And that’s the MO for the talking-head cable news networks.

If you are looking at cable-television news, it’s where the pundits and the chattering classes and the middle class gets its guidance on politics. I would say there that the quality of journalism is dreadful. Especially political journalism, but not exclusively. I think it does a great disservice to American politics. I would agree with that assessment. It’s enough to make people angry, but that anger doesn’t mean the media are doing it right.

I saw a video the other day of a college student walking around campus and asking fellow students questions like, “Who won World War II?” and “When was the Civil War? Who won?” I don’t think a single person got either right. But most of the same people knew immediately who Snooki was. I was discouraged, but in the book, you look at that type of ignorance in a different way.

Necessity is the mother of invention, and if people feel like they can be active participants in society politically, they will get the information they need to be active participants. They will be able to answer fairly routine questions. In American society, particularly in the past 40 or 50 years, it’s pretty clear to most people that they have no power…whoever you vote for. The power is actually small compared to the stakes attributed to the office. The dominant commercial interests rule the day.

This is not a controversial statement among political scientists. You’ll see in the book [that we look at] several major studies of who influences the decisions of the United States government at the state and local level. They are overwhelmingly made by wealthy interests in their own interest. The great majority of people have no influence whatsoever. So if you are a regular person, someone who doesn’t have influence on politics, it makes perfect sense to tune that out.

I mean, why torture yourself with a reminder of how powerless you are? Knowing about the New England Patriots’ line-backing corps and what they’re going to do on third and long, that’s a much more satisfactory use of your power. Whether Snooki had a butt lift or not, that’s a more interesting issue than learning about international trade policies because you can’t do anything about it.

Did the average citizen in the 1960s and 70s have more influence than we have today?

Yes. In the book, we talk at length about what was going on in the late 1960s and early 70s and what a crisis it produced in the United States because we were becoming a far more democratic society, turning the U.S. into what we call a “social democracy.” In the late 70s, you saw a counterrevolution by the corporate business community to basically take over the government and make sure it didn’t get out of hand, and part of the strategy was to get people depoliticized, to prevent women, people of color, environmentalists, and other from interfering with them. They were very successful. They had a three- or four-decade run. But as we talk about in the book, I think that run is over. I think the days of shop till you drop, take care of number one, let the rich people run the country and hope you get lucky, I think that’s all run into a ditch.

The second anyone questions capitalism in this country, they are immediately labeled a communist. How realistic is it, as you advocate in the book, for Americans to take a cold, hard look at that system?

Oh, I think it’s very realistic. I think this country is ready for that cold, hard look. Even Republicans are ready for that cold, hard look. There is the fairytale capitalism of Paul Ryan and Milton Friedman, acolytes and politicians in both parties about small business competing and creating jobs, and the big, bad government interfering with them. That’s a nice fairytale, but it has nothing to do with America today. That’s the problem.

America today is capitalism dominated by very large monopolistic firms, fat cats that face very little competition. They own the politicians, they set the rules. This isn’t a radical idea. The Economist magazine’s recent cover story says there is way too much monopoly domination in the U.S. economy. It’s killing capitalism, their sort of capitalism. It’s causing inequality, corruption, and it’s an absolutely first-order crisis.

Andy and Elahe Dayton talk about their new book, The House That War Minister Built.