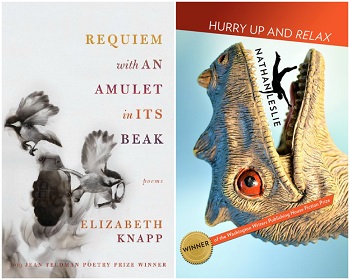 As a writer, I’m fascinated with how other writers choose the title of their works, particularly when it comes to poetry and short stories, since collections’ titles often mirror their cornerstone piece. What makes a poem or a story jump to the front of the line? What hints at deeper meaning? Here, Elizabeth Knapp and Nathan Leslie share insights into their respective, recent award-winning collections, Requiem with an Amulet in Its Beak: Poems and Hurry Up and Relax: Stories, published by the Washington Writers’ Publishing House.

Elizabeth, your title poem, “Requiem with an Amulet in Its Beak,” scared me. How does the title relate to the death images in the poem? Why did you choose this as your title poem?

Well, I don’t know that fear was exactly the reaction I was going for in the title poem, but I’m glad it grabbed you! With this particular poem, I can’t remember which came first, the title or the poem (sometimes, I start with a title and then write the poem, and other times, I think of the title after I’ve written the poem), but obviously the title is figurative, and the entire poem is a kind of apotropaic incantation, a spell against death.

As for how the title relates to the imagery, I don’t think poets should be in the habit of explicating their own poems, but I will say that the image of a nest built with the “worldly trinkets” of the dead — the moon, a baby tooth, a tuning fork — reminds me of a Surrealist painting, maybe something by Magritte. The more I think about it, the more I realize that the nest is a “made” thing, a work of art, like a painting or a poem. In this way, the poem is both elegy and ars poetica. I chose this poem as the title poem because I think (hope) it’s both a memorable poem and a striking title.

You write in another poem that “the greatest risk in a poem is sentimentality,” to paraphrase the opening line of “Self-Portrait as Kurt Cobain's Left-Handed Guitar.” When you write about death, love, the big subjects, how do you avoid sentimentality?

Despite the preoccupation with sentimentality and cliché in the poem, I think you just have to write without fear of writing badly. If you edit or censor yourself while writing, you’ll kill all spontaneity and surprise. Sentimentality and cliché detectors should be turned off while composing and then turned on while editing and reading. Also, I think a poet has to be willing to risk committing these cardinal sins if she’s going to write a good poem. If she fails, so what? No one else has to read it.

Do you have any advice for poets in putting together a collection to submit for publication?

Always get another (or two or four) set of eyes on your manuscript. Find a community of poets you trust and exchange manuscripts with each other. One effective method of solo manuscript editing is to lay the poems out on the floor and put them together as you would a jigsaw puzzle. Leave them there and play with them for days, weeks, months, and see what emerges. Finally, don’t be afraid to cut poems that you’re attached to for various reasons, and don’t keep any poems that you’re on the fence about. Every single poem in the manuscript should be able to stand on its own.

Nathan, I’ve heard you declare that your stories are not autobiographical. However, “Hurry Up and Relax,” the title story in your collection, is about Paulie, a middle-class, middle-aged suburban guy, and with all due respect…

I view Paulie as an Everyman in many respects, someone we can all relate to. Here is a guy who is simply trying to take care of his house during his staycation, and yet the handyman he hires, "Lans," brings with him a ton of baggage and drama. I have written a number of stories about a wide variety of suburban characters, both in this collection and in others. Unlike Paulie, I would never hire a handyman from Craigslist and allow my life to be taken over by a stranger's (among many other differences). This story was actually inspired by a funny anecdote a friend told me years ago.

As Flannery O'Connor says, to paraphrase, a short story offers an experience. It seemed like the right choice — perhaps a way to connect Paulie to the larger community (if we even have "communities" any longer). The last page or so of the story suggests, among other things, that we never really know anyone. This seems to be a sad truism. All that we can control are our own actions, thoughts, and feelings — if that. As for the title, Hurry Up and Relax suggests a certain restlessness and inability to disengage that seems to be characteristic of this era. There is an intensity and impatience to our society that did not exist even 20 years ago. Thus, the satire that is present in this collection is often a way to address our contemporary foibles.

Do you have any advice for writers putting together a story collection to submit for publication?

Throughout my writing career, I have often focused on thematic collections of stories. This collection is not entirely thematically unified, but it feels interconnected in   terms of mood, at least. Too often, it seems that collections can be a bit incoherent overall, even if individual stories are effective. However, beginning with a simple assortment of really good stories, a firm foundation upon which one can build is the best advice. I would also recommend developing a relationship with editors — editors of literary magazines and presses are the unsung heroes of the literary world.

Caroline Bock’s debut short-story collection, Carry Her Home, winner of the 2018 Fiction Award from the Washington Writers’ Publishing House, is now available as an audiobook on Audible. She is also the author of the young adult novels LIE and Before My Eyes from St. Martin’s Press.

John Maxtone-Graham devotes his considerable knowledge and impeccable prose to a discussion of salient, provocative and rarely investigated components of the sinking of the Titanic.