An Interview with Arnold Lehman 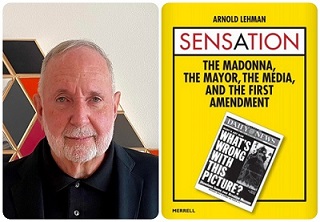 In 1999, the Brooklyn Museum exploded a bombshell on the battlefield of artistic freedom and First Amendment rights with its exhibition “Sensation: Young British Artists from the Saatchi Collection,” which the museum’s director, Arnold Lehman, brought to Brooklyn from the Royal Academy in London.

Among the other provocative paintings in the exhibition, artist Chris Ofili’s “The Holy Virgin Mary” created an uproar at city hall. The painting depicted a Black Madonna with one breast created from shellacked and carefully decorated elephant dung. The painting outraged New York’s mayor, Rudy Giuliani, who tried to shut down the exhibit, fire the board and director, and throw the museum out of its historic building because he viewed the display as “sick” and “disgusting.”

The museum’s trustees, represented by attorney and First Amendment expert Floyd Abrams, sued Giuliani in federal court to stop his attacks. The exhibition and lawsuit dominated New York’s front pages and the international media for six months. In the end, the museum was victorious. Now, Lehman retells this story — still relevant today — in a book appropriately titled in all caps, SENSATION: THE MADONNA, THE MAYOR, THE MEDIA, AND THE FIRST AMENDMENT.

You’d been a museum director for 25 years when you brought “Sensation” to Brooklyn. The exhibition had already occasioned outrage in the U.K. Did you anticipate the same reaction in the U.S.?

I knew that “Sensation” included numerous strong, exciting, and provocative works, most not seen in the U.S., which was the reason I wanted it for the museum. However, at the Royal Academy in London, it was one painting, “MYRA,” that was the cause of the uproar. “MYRA” went almost unnoticed in New York. “The Holy Virgin Mary,” on the other hand, which the British media hardly mentioned, was the core of the frenzied media and legal battle in New York. However, I believe the outrage over the Madonna was planned and politically motivated.

What does the extreme reaction say about museumgoers in both countries?

“All politics” is often said to be local. Similarly, without the U.K. backstory of “MYRA” being a serial child-murderer, visitors to “Sensation” at Brooklyn only saw a huge portrait of a woman. For “The Holy Virgin Mary,” a backstory was created and incited by the conservative media to support Mayor Giuliani’s early race against Hillary Clinton for the New York Senate. The vast majority of New Yorkers approved of the Madonna despite the media frenzy, while the painting was never the center of any attention in London. In this instance, I believe the focus for the audiences was information rather than any cultural differences.

How much were the Brooklyn Museum’s legal fees, given that Mayor Giuliani opted to settle the case rather than wait for the opinion of the appeals court?

Even with a very substantial discount from our extraordinary attorneys, Floyd Abrams and Susan Buckley, preparing and prosecuting a First Amendment case in federal District Court [that was] continued in the court of appeals…together with the required depositions, court appearances, and a multitude of meetings, was a very time-consuming and costly undertaking. The museum raised funds from its dedicated trustees, engaged foundations, and other supporters to underwrite these costs.

Why did it take you two decades to write SENSATION and document the cultural clash?

Although many tried to “unseat” me, with the total support of our trustees, I remained director at the Brooklyn Museum for almost 16 more years. During that period, although I had always thought about writing a book on “Sensation,” I was both immensely busy and also believed strongly that it was inappropriate to write such a personal narrative about the institution I was then serving. With the beginning of the Trump Administration, I became increasingly concerned about the issues and challenges to the freedom of expression, which was critical to the very core of the battle over “Sensation.” It was at that moment I knew I had to write and publish SENSATION as soon as possible because of its relevance. The monumental undertaking of reviewing all the original research materials, much of which had been collected by my wife, took immense time. Hiring a researcher (which was made possible by a grant from the Ford Foundation), finding a publisher at the beginning of covid, and the actual writing, in total, took over three years.

Why is SENSATION being published in Britain and not the U.S.?

I approached several American publishers whose books I admired during my career. While there was enthusiasm expressed for the book’s concept, a mixture of current politics and the unknown stemming from the advent of covid were, I believed, deterrents to an agreement. Along with the others, I sent an outline and two unfinished chapters to London’s Merrell publishers, who had worked earlier with us at the Brooklyn Museum on several excellent publication projects. Hugh Merrell responded almost immediately that he had read everything I sent him, and despite being only art-book publishers, he offered to work with me on the book. My partnership with the incredible editor and designer assigned by Merrell to SENSATION was beyond superb. And the tangible book, amazing in every detail, is the result. SENSATION is a narrative or memoir, but it was produced as an elegant art book!

An Interview with Anton Piatigorsky

An Interview with David Morgan

The journalist talks Spam, dead parrots, and the Ministry of Silly Walks.