An Interview with Paulette Jiles

The novelist/poet discusses westerns, accolades, and her admiration for world-building narratives. 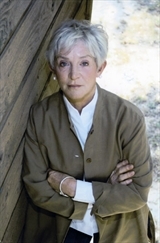 (In honor of today's release of the paperback version of News of the World, we present an interview we did with author Paulette Jiles last fall.)

In her latest novel, News of the World, Paulette Jiles masterfully evokes the American West, conjures the memorable character Captain Jefferson Kyle Kidd​, and tackles the complexity of love forged under duress. The response from critics and readers alike has been overwhelmingly positive.

News of the World is up for a National Book Award this year. At this point in your career, does the nomination feel like validation, or is validation beside the point?

It feels great. I don't know whether or not it is a validation, but I am very happy that News of the World was chosen at least for the short list. It is a classic western, with exterior events driving much of the narrative, and I am indeed happy that that approach has received a validation. Because that is how I write.

Though not promoted as a western, News of the World is set in the American West, and you yourself live in San Antonio. Do you have any thoughts on the western as a genre? Are novels by authors like Louis L’Amour and Larry McMurtry unfairly pigeonholed when described simply as westerns?

You forgot to mention Cormac McCarthy. What can I say? I am not a literary theorist. The range in writing styles and level of expertise is enormous. Let me take a flyer — both westerns and sci-fi place the protagonist in a lawless situation, and in a society without laws personal honor is paramount or nothing would ever get done. So your main person is a person of honor in a lunatic world and whether he/she manages to maintain personal standards is part of the plot. Exterior events assail the hero. Hero comes through or doesn't. That's the plot. lt is true of All The Pretty Horses and The Road and the one Louis L'Amour novel of which I have managed to read several chapters, I forget the title, mercifully, and Lonesome Dove. Captain Kidd is determined to be an honorable man and to protect the girl even to the cost of his life.

You’re a novelist, memoirist, and poet. Do you find one medium more challenging — or rewarding — than the others?

The most challenging writing is for me the novel. I keep discovering new things, new tools, new approaches. I can't wait to try them out. I worked with the dystopian and cli-fi aspects in Lighthouse Island, learned a lot simply by writing it, went back and re-wrote it, and it is all absorbing, fun, fascinating. The closer I get to fairy and folk tale, the happier I am.

Which fellow writers or poets working today most inspire you? Why?

Other writers who are experimenting with the action novel, the hero figure, his/her parameters, aspects, choices. World-building. McCarthy built a whole narrative world with the border, the interior of Mexico. I love Dorothy Dunnett's ability with narrative summary, a terrific direct scene like the initial card game in Thirteen Moons. These are examples of writers who have mastered their tools, and I learn from them.

I ran across an article online by a master weaver who was asked to analyze some very ancient textiles from the ancient Tocharian people, and she said things like, “You can see where she chose a twill here, and then decided to finish the selvage with a three-strand thread,” and so on, as if the ancient weaver were still alive and working. Same with literary techniques; in texts as old as The Tale of Genji and The Odyssey, we can see the same choices being made as if it were yesterday.

[Editor’s note: Click here to read the Independent’s review of News of the World.]

Q&A with the author of Buried On Avenue B, among others, and co-author with James Patterson of three books.