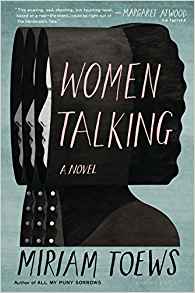 Hundreds of the Molotschna Mennonite colony’s women and girls — the youngest only 3 years old — are repeatedly assaulted in their homes during the night. Upon waking, they have no memories of the attacks.

Bishop Peters, the supreme leader of the colony, gives several possible explanations: Demons of Satan carried out the attacks; the assaults were God’s punishment for the women's sins; or they were not attacks at all but lies, or even the “wild female imagination.”

This wouldn’t explain, of course, how unmarried Ona Friesen became pregnant, or how the attack on Nettie Gerbrandt caused her baby’s premature birth and death, or how Salome Friesen’s toddler contracted a sexually transmitted disease.

Salome’s sister hangs herself after Peters dismisses Salome’s daughter’s attack as a fabrication.

The women finally set a trap and catch the perpetrators in the act. At least eight colony men have been sneaking into homes at night, drugging women with horse anesthetic, and ravaging their bodies.

Now the men are in jail — a safer place for them than the colony, where Salome tries to kill them with a scythe, and relatives of other victims hang one man from a tree. When many of the remaining men travel to the city to bail out their kin, the women must decide how to take control of their lives.

They have two days until the men return:

“We women are asking ourselves what our priority is, and what is right — to protect our children or to enter the kingdom of heaven?”

The women of Molotschna have no voice; they are commodities. The bishop will give them an opportunity to forgive those who attacked them, thereby securing everyone’s place in heaven. If they don’t forgive, they will be excommunicated and banished.

Four generations of women meet in a hayloft to discuss what they should do. The women can’t read or write — they only speak Plautdietsch, an old German Mennonite language — and so ask August Epp, the local schoolteacher who’s returned after a long-ago excommunication, to transcribe the notes from their discussion.

The women are not “do nothing” females — those who will forgive the men as required and then continue with their lives as if nothing has happened. (“Is forgiveness that is coerced true forgiveness?…And isn’t the lie of pretending to forgive with words but not with one’s heart a more grievous sin than to simply not forgive?”)

Instead, their murderous thoughts against the perpetrators might result in violence, which is against their religion. The only way to save themselves, their children, and their souls is to leave.

If they start their own colony, the men and women in it will share all decisions. Women will be allowed to think, and girls will learn to read and write. They will create a new religion based on love. This will be their non-violent manifesto.

But where will they go? They know nothing of the outside world. With a fierce determination to protect their children and their integrity, the women consider what it will mean to leave their entire world behind and venture into the unknown:

“By staying…we women would be betraying the central tenet of the Mennonite faith, which is pacifism, because by staying we would knowingly be placing ourselves in a direct collision course with violence, perpetrated by us or against us. We would be inviting harm.”

Women Talking is based on the true story of a Mennonite colony in Bolivia, where, from 2005 to 2009, hundreds of women young and old were routinely drugged with animal anesthetic spray and raped. They awoke to pain, bruises, and bleeding. A "group of eight" men had violated almost every female member of the colony.

Author Miriam Toews’ unique narrative takes readers through the thought processes of these women, who will not be coerced into feigning forgiveness for the sins against their families. Instead, they consider both the physical and spiritual consequences of their options as the clock ticks down to the men’s return, reaching a courageous decision that will change their lives forever.