Half an Inch of Water: Stories

A darkly magical assortment of tales that embraces both unrelenting suffering and life’s small, saving graces. 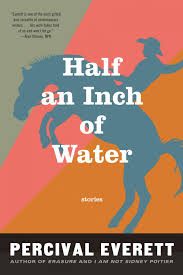 Percival Everett’s new story collection, Half an Inch of Water, is shot through with miracles, which is a good thing, because something needs to be in there to balance out all the despair.

His characters — Wyoming and Colorado cowboys, cops, veterinarians, Indians, male and female, though mostly male — are so laconic that, judging by their reactions to things, you’d think there’s not much difference between winning the lottery and finding a severed head in a box.

(The first doesn’t happen in Half an Inch of Water. The second — spoiler alert — does.)

So, yeah, a little deus ex machina to liven things up, to goose these stories into something like a resolution if not an actual epiphany, seems appropriate, if at times abrupt and maybe a little affected and strained.

But I suspect most readers aren’t going to much mind all that — I certainly didn’t — because Everett is so good at what he does, which is invoke a profound and resonant sense of place, culture, and atmosphere. The world his characters inhabit is a country of wide-open spaces that somehow manages to feel both claustrophobic and exposed. And his people, for all their easy familiarity with one another, live in stark isolation, far, far away from the next nearest human, even when they live in the same house.

There’s tension any time they walk outside — not that staying inside is much different.

The challenges they face — or, rather, the challenges that find and threaten to obliterate them — are daunting. A deaf Indian girl wanders into the desert, where a veterinarian and expert tracker finds her surrounded by rattlesnakes. A frustrated father forces his daughter to accompany him on a hike, during which he breaks his ankle and they end up having to escape a deranged, starving mountain lion.

An elderly woman roams further and further from home on her morning rides, trying to follow the tracks of a ghost horse, until her own horse takes her to a place both familiar and utterly foreign — a place from which she might never be able to return. Until, miraculously, she does.

For all the despair here, there are those moments of grace, or something like it.

While some of Everett’s stories do peter out, taken together, they have the feel of what you’d find flipping through an artist’s sketchbook: still-lifes, figure studies, landscapes — fascinating preparation for something much bigger, longer, more fully realized.

Nine stories in search of a novel, perhaps. Which, in the hands of a great writer like Everett, wouldn’t take a miracle to make happen.

Steve Watkins is the author of 10 books, many of them for middle-grade and young-adult readers, including Great Falls, a post-Iraq/Afghanistan War novel coming out in spring 2016 from Candlewick Press, and books #3 and #4 of his Ghosts of War series, also due for publication by Scholastic early next year.

Serenade for Nadia: A Novel

A heartrending story of love and resilience in the face of war’s inhumanity.