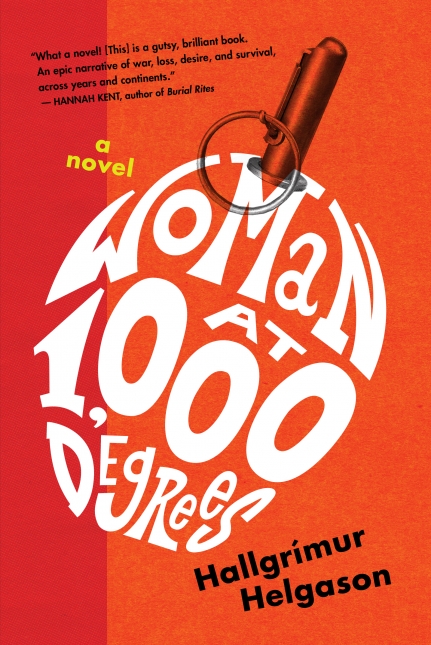 Without prelude, the novel Woman at 1,000 Degrees, a nominee for the Nordic Council Literature Prize, opens with 80-year-old Herra Bjornisson introducing herself as an old woman dying alone in a garage, with a laptop computer, two cartons of cigarettes, and a hand grenade for "cozy" company.

Then, abruptly, she entreats, "Before I explode, permit me to review my life."

With this request, the reader is launched into Herra's jarring first-person narration, bordering on stream-of-consciousness, that carries us zig-zag fashion from the year 2009; backward to her birth in Iceland in the autumn of 1929; forward again as an orphaned teenage wanderer through Nazi Germany and then post-war Argentina; and, ultimately, back to modern-day Iceland.

On her journey, she encounters one atrocity after another, and recounts each with a mixture of bravery, bravado, horror, and resignation. At first, Herra's chilling, bawdy narration is off-putting. But after witnessing her descriptions of cruelty, rape, and the smell of burning bodies at Treblinka, the reader understands full well how the monstrosity of war can whittle away human decency when sufferers relive, as she says, "the worst moment of your life over about five times a day."

Living within a bellicose universe for four years, Herra adopts an existential philosophy: She is young, alone, abandoned, yet, oddly enough, free. She makes choices often leading to disasters with men, women, and her own children, and along her episodic journey, she tries to divine meaning in her chaotic life.

She notes, in the midst of human depravity, that God is a tasteless comic by allowing "the trees to bloom and flowers to sprout out of the earth and filling them all with chirping birds." Eventually making her way to her home country of Iceland, she encounters widespread societal denial of the consequences of war and the comprehensive reluctance to speak of it.

Desperate from having no one to blame but "luck," and no one to listen to her miserable plight, Herra collects her secrets and locks them deep inside. Like her countrymen, she "surrendered to the tyranny of Mr. Silence, the despot who ruled Iceland in the twentieth century and...remained subservient to it all the way here into the garage."

It is in the garage — where she lives during the first and final chapters of the novel — that we find her again. Aged, crazed, and infirm by now, she has unloaded her shocking story, leaving readers to wonder if those who died in the war were luckier than those who survived.

A fierce survivor herself, Herra's ironic last choice, defying her repugnant remaining family, is to make an appointment for death by cremation at a specific day and time in a thousand-degree oven, entering "head first."

Throughout the book, scenes through Herra's eyes, skillfully composed by author Helgason and adeptly translated by Brian FitzGibbon, expose the boundaries of descriptive language with arresting similes. Thus, Helgason, through Herra, describes her father, Hans Henrik, after World War II as a "wreck of a man…The war had shaken every piece of manhood out of him, like coins out of a piggy bank."

The experience of war becomes tactile. Helgason writes: "The main difference was that now all their dreams had been erased from their lives, like the mountains. The future was no longer an uncertainty that glowed behind the next hill; it simply loitered in the courtyard like a black dog. It wasn't there, but here, not a dream but a fact."

Woman at 1,000 Degrees is not for the faint-hearted. Rather than distancing itself as a remote historical account, Herra's point of view carries the reader atop her back, it seems, experiencing her degradation in excruciating detail.

Within the last pages, her conclusion, spoken in character by Helgason, should be required reading for every militant individual and institutional body on the planet. Says s/he:

"The legacy of generations had been razed to the ground. Everything that mankind had achieved, built up, and aspired to for a thousand years, everything that had delivered me into this world had been wiped out…The World War had achieved nothing, brought nothing. Nothing had been won, nothing gained. Germany was still Germany, and Russia, Russia. Between them lay Poland. Tanks had pushed borders to the east and west, but soon everything would fall back into their original positions…Yes, of course, 50 million lives had been lost…"

Woman at 1,000 Degrees is a bold work of fiction that gnaws at the silence blanketing the blackest holes of humanity to lay bare the author's dark vision of truth.

Janet A. Martin is an award-winning freelance journalist and author who assists individuals writing their memoirs.