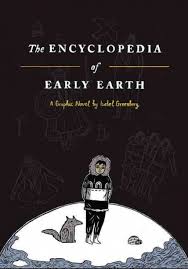 Despite what the title might lead you to believe, Isabel Greenberg’s graphic novel The Encyclopedia of Early Earth gives us little in the way of hard facts. And, honestly, that’s perfectly okay. There’s more to gain from her resourceful Wise Old Crone or caring Kiddo than from your run-of-the-mill encyclopedia.

The tale doesn’t begin with rigorous terms or definitions; instead, the first thing we learn from The Encyclopedia of Early Earth is about the power of love in an era older and stranger than our own. The natives of blistering “Nord” hardly look beyond the light of their fires. Enter the Storyteller, an unlucky boy split into three physical bodies at birth only to be re-formed years later with a major fault: a piece of his soul is missing. Like these stories tend to go, the boy embarks on a grand journey that takes him from the cold tundra of his home to the savage wilds of Britankitarka and far beyond the familiar lands of the Frozen Sea. Sausage-hungry giants, malicious kings, and a capricious god named Bird Man challenge the young protagonist, journeying to make himself feel whole again. Our Storyteller has a knack for telling all sorts of tales. His wit and his words are his weapons, but smooth talking can only get you so far when it comes to dealing with the denizens of Early Earth.

Greenberg presents a patchwork of cultures and fables, populating them with her own charming cast of characters. Noah’s Ark and the Great Flood quickly turns into an account of scorned love — “because floods, after all, are tried and tested.” A talking whale’s mouth provides well-timed transport, while a greedy mapmaker keeps his city in the dark about the world beyond Migdal Baval’s walls. And it is no accident that the boy Storyteller’s quest mirrors that of Odysseus from Homer’s famous epic. This mixing and matching of mythologies serves to make the world of Early Earth rich and unpredictable. I found myself eagerly flipping the page to find out what familiar myth might surface next and how its meaning might affect the overall story.

The panels in this graphic novel are washed out and sparsely colored, but they burst with personality. Muted grays, whites, and blues evoke the feeling of a cave painting, with clever accents of red or yellow used to develop certain cultures and characters. All in all, it’s beautifully drawn. From the spontaneously combusting Firebirds of the Ama-zin isles to the mischievous monkey assistants from the Island of What, The Encyclopedia of Early Earth never lacks for vivid depictions of its odd inhabitants. The narrator’s voice, too, is unique, as if self-aware of the novel’s constant use of familiar tropes like the shrewd Medicine Man (who is acknowledged as a “plot device that will never be explained”). Where other works might be bogged down by these clichés, Greenberg flaunts them and pokes fun.

Certainly, some stories and characters proved to be less interesting than others. While reading, I was absorbed by the central plot surrounding Storyteller, but then a new side-story plopped into the picture, interrupting the flow of the narrative. This juggling of multiple stories throughout the graphic novel acts as a double-edged sword: sure, Early Earth makes for an enticing setting, but jumping back and forth between side-stories and central plot was jarring. Greenberg delivers the encyclopedia that the name suggests, but the graphic novel’s strengths shine more in that main plot and its delivery, even if those side episodes provide insight and humor.

Minor gripes aside, The Encyclopedia of Early Earth is just plain fun. Even more than that, buried just a bit below the satirical, snowy surface, you’ll find a story that’ll hit harder than expected. Greenberg’s sweeping invention is a success; it’s entertaining, moving, and an utter pleasure to read.

Joe Dell’Erba is an intern and Young Adult coordinator at the Washington Independent Review of Books. As a recent college graduate, he’s on the lookout for any professional excuse to read and write every day. You can find him on Twitter at https://twitter.com/jtdelle.