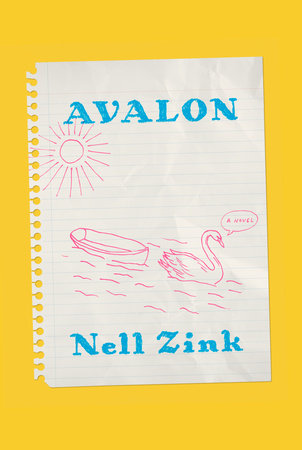 It is a truth universally acknowledged that no one finds college students endlessly fascinating except for other college students who are in love with them. Thus, it’s a bit of a head-scratcher that Nell Zink centers much of her latest novel, Avalon, on a know-it-all undergrad so insufferable that even his devoted paramour is defeated in her attempts to hang onto his every word.

The first-person narrator, Bran — immediately after meeting her beloved — tells us, “(Throughout this text, I will employ the token ‘[. . .]’ to indicate inability to quote, paraphrase, or reconstruct things Peter said.)”

Even so, she proves exceptionally capable of capturing entire extended paragraphs of his mini-lectures, spackled together as they are with the inevitable learned references to Important Works. Peter understands without irony that his life’s vocation will be to comment on things others have created. Readers (including book reviewers) are in on the joke, sure, but it’s not that funny.

Meanwhile, Bran’s story makes her a minority of one. A white child living in the L.A. suburb of Torrance, her life is so undocumented that she can’t even get a library card. She is multiply abandoned, first as an infant by her father, who emigrates to Australia. Then her mother takes off to become a Buddhist nun at a temple just up the road, leaving Bran to the untender mercies of her “common-law stepfather,” Doug Henderson, his son, Axel, and the outlaw-biker-gang chief and family patriarch, Grandpa Larry.

The family launders money via the cover business of a nursery, using as its unpaid labor a rotating staff of undocumented workers, always dubbed Eric and Roger, and now Bran:

“The Hendersons were happy to keep me on. A ten-year-old stepchild represented circa eight years of unpaid labor and a potential twenty thousand dollars in earned income tax credits, if the IRS played along.”

Bran’s grandparents live nearby but are more than happy to believe the girl is fine where she is. During her formative years, all the adults in Bran’s life join in looking the other way.

In sixth grade, Bran finally meets a kindred spirit, Jay, an outcast with “the fey look that drew bullies to him like flies to sherbet.” He and the group that grows up around them in high school all live far more pedestrian, privileged lives than Bran, who exists under a system of indentured servitude and “looming sexual menace.” Eventually, everyone heads to college except her.

Enter Peter, a UCLA freshman whom Jay — who has a tendency to fall in love with straight guys — worships. It takes Bran under a paragraph to achieve the same smitten state, though the reader can be forgiven for never quite understanding why.

Perhaps it’s that Peter seems like the one who will ultimately rescue her from the Hendersons, from whom she escapes multiple times — the most dire episode occurring in the midst of a wild Memorial Day party when Grandpa Larry’s friends surround her as he fixes to auction her off — only to be drawn back in later:

“The ignorant child who knew no other life, the perfect employee, taught to accept self-harm as an economic necessity.”

Much of the rest of the book involves Jay’s adventures in film school, Bran’s final extrication from the Hendersons and her initial efforts as a screenwriter, and Peter’s continued effing with Bran’s head and heart. Plus, of course, lots of Peter’s long-winded hot takes on whatever subject comes up, which somehow always involves charges of fascism. Indeed, when either Jay or Bran wants to talk about Peter — and don’t they ever! — they use the topic of fascism to ease into the conversation.

The story is finally capped with a long road trip up the California coast through Big Sur that unlicensed Bran undertakes in her rickety, unregistered Mazda to meet Peter at the epic annual party of some famed professor. One grasps that this is the final leg of the hero’s journey.

I remain unclear on what it all adds up to. The primary social commentary involves passing references to the Hendersons’ multiple Erics and Rogers, to the maid at Jay’s house, Esme, and to the fact that Bran negotiates with Esme to take over lawncare duties “when Jay’s family’s gardener got taken by ICE from his job at a warehouse.”

Yes, it’s an interesting quirk that Anglo Bran has no documentation to prove her existence and thus, for example, gets fired from a cushy job at a coffeehouse ahead of a rumored ICE raid. But she is a cohort of one. By this time, all her friends are rich, and she has the luxury of multiple roads out of her emotionally and fiscally impoverished life, if only she will take them.

Will she? Will the reader lose sleep either way?

Recently, I left off listening to Jennifer Egan’s A Visit from the Goon Squad to listen to Zink’s Doxology, ensuring that the two books are forever linked in my head. They share a voice of Gen X disaffection and arch, ironic detachment. (Yes, I hear you: “Okay, boomer.”)

It’s all well and good for these comic novels, in which character development ends up primarily being a collection of interesting quirks and the shorthand stamp of whatever job or college major the characters have fallen into.

The collateral damage, unfortunately, is to readers’ investment in the outcome.

Perhaps it’s a spoiler to note that the beginning of this novel is its end. After the last page of the book, simply return to the first for a tidier conclusion. Does this make Avalon the never-ending story?

As Bran repeatedly observes concerning Peter, she is being effed with but loves it. As a reader, I agree with the first part — not so much with the second.

Jennifer Bort Yacovissi’s debut novel, Up the Hill to Home, tells the story of four generations of a family in Washington, DC, from the Civil War to the Great Depression. Her short fiction has appeared in Gargoyle and Pen-in-Hand. Jenny reviews regularly for the Washington Independent Review of Books and serves on its board of directors as president. She has served as chair or program director of the Washington Writers Conference since 2017. Stop by Jenny’s website for a collection of her reviews and columns, and follow her on Twitter at @jbyacovissi.

Stumbles aside, this fast-paced occult thriller is a worthy read.

A stylistically clever literary romp through the mind of a dying man.