With or Without You: A Novel

Think this plot device is too much? Look at our lives just now. 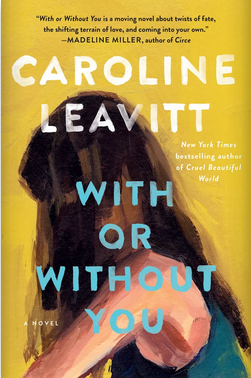 Should you welcome some time away now that we can't actually get away, New York Times bestselling novelist Caroline Leavitt’s latest book may be your ticket. With or Without You is an enjoyable, reliable beach read.

That’s a compliment, not a slam.

“Beach read” is shorthand for an absorbing page-turner you can hardly bring yourself to put down. So what if, two months and a dozen books later, maybe you only recall its outline — and that you really liked it? You'd prefer to read Proust all the time?

Leavitt has a happy knack for making an unusual circumstance believable and her characters flawed, which is to say, they quickly become people we care about.

Stella and Simon live in one of those one-bedroom apartments New Yorkers deem “a find” because of tall windows and a cubbyhole extension that can be screened off as a nursery or small guestroom. Stella is ready for the nursery, Simon is not. Both are 42, and they’ve been together 20 years. They love each other dearly. Neither has ever strayed.

When they met, Stella gave up her nursing job for two years to follow Simon’s band as it enjoyed a flash of true, but not lasting, fame. Simon had written what would turn out to be the band’s one-and-only megahit. Gradually, then not so gradually, the big bookings, the groupies, and the all-night parties faded away.

Now, when the megahit turns up as elevator music, people hum along. But they can’t recall the name of the band, which still performs several times a week in tucked-away dives. The gigs bring in just enough money for Stella and Simon to pretend Simon is working. Contributing.

Simon is Peter Pan in black jeans and a black T-shirt. He spends his days playing his guitar and writing songs. He holds Stella’s hand when they go out. He brings home flowers and, occasionally, drugs.

A big star hears the band perform and invites them to open for him in a series of Los Angeles concerts. For all the band members, it’s that storied second shot at success. Even if it just turns out to be for a few weeks, they’ll be on the road again, playing the giant arenas. Simon is euphoric.

Yet, that night, Stella and Simon fight the same fight they always do, which comes down to: stay “spontaneous” or grow up and have a child? “You know I don’t want a kid, and that doesn’t make me a villain,” Simon tells her.

For the first time, the familiar back-and-forth feels ominous to Stella, who has a horrific cold, perhaps even bronchitis. She downs a cold remedy and then several glasses of red wine as they spar.

Simon holds out a couple of little pills, gifts from a buddy. “We could share this and see what happens. It could be like it used to be,” he tells her.

If this were a movie, you’d hear the music turning dark and frantic. You’d be shouting at the screen, “Don’t do it!” But she does. They dance, sing, make love. All the while, Stella feels strange and terribly tired, as though she’s outside her own body.

The next morning, she doesn’t wake up. Maybe she won’t, ever. Stella is in a coma, and half of all coma patients never do.

A brief pause here to observe that, six months ago, I would have rolled my eyes at this plot device. Too much, I would have said. Just not believable.

Oh, the difference a global pandemic makes. The book and real life have flipped places.

Falling into a coma isn’t that unusual. (It happened to the author in real life.) All sorts of medical emergencies can trigger one. What we’re living through today is what isn’t believable. Being scared to go grocery shopping, not being able to tell a bank robber from a dental hygienist, and that fellow in the White House suggesting we all might benefit from drinking bleach or sleeping with a UV light down our gullets.

Did I mention the medical expert with demonology issues?

Back to the book. Her colleagues at the hospital know combining wine and pills is out of character for Stella. For years, they’ve shaken their heads behind her back as she talked about Simon. Now they make no secret of their contempt. Especially Libby, a doctor and Stella’s best friend. Nobody expects Simon to stick around.

But he does. He’s there for Stella every day for almost five months. We watch him grow up at warp speed. Then Stella awakens, and she isn’t the person she was. This “after” is more than half the book, and definitely the stronger half. I’ll give away no more of the plot.

As for the book’s conclusion, enough to say, it’s sufficiently satisfying. Even though we see it coming, it doesn’t feel manipulative, which is a serious skill. In fact, I can stretch enough to say With or Without You has a happy ending.

We need those right now.