A fun take on the genre as protagonists from top thrillers meet in unique ways to solve their crime and get the bad guy. 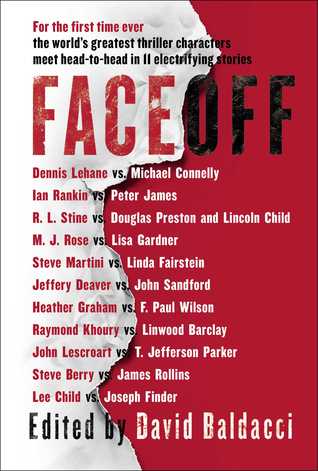 FaceOff, an anthology of all-new short stories, is part of an ongoing project by International Thriller Writers (ITW), whose founders thought it would be fun (and perhaps profitable) to throw each other’s protagonists together in various tales to create clever — and unexpected — bad-guy hunting teams.

The writers clearly enjoy the process. All of them are well established, with most having written bestsellers (and many having sold multiple millions of books). They are not paid for their contributions to ITW’s anthologies, however. The proceeds of FaceOff, like two previous collections, will go to support the ITW. Given that its first anthology (Thriller, published in 2006) sold 500,000 copies, the organization should be pretty well endowed.

To some extent, this generosity is dictated by the authors’ contractual obligations. These writers mean big money for their publishers, and only by contributing these collaborative stories gratis can they avoid a clash of contracts.

The result? A lot of fun and some topnotch writing as Patrick Kenzie teams up with Harry Bosch to solve a cold (and not-so-cold) kidnapping case in Boston; Lincoln Rhyme and Lucas Davenport combine their respective specialties to solve a series of grisly New York City murders; and John Rebus and Roy Grace wrap up a decades-old mis-recorded case in Brighton.

But while these stories are fun to read and full of the energy and high spirits that masters of the genre are so good at, I felt, at times, that the short-story format constrained them.

Especially for those writers who like complicated plot twists, there sometimes just aren’t enough pages to get everything worked out. In Steve Martini and Linda Fairstein’s “Surfing the Panther,” for example, an otherwise excellent adventure starring Paul Madriani and Alexandra Cooper ends poorly as the authors try to conclude things with a hurried double twist.

Other stories have too many characters on top of complex plotlines. In “Rhymes with Prey” (Jeffery Deaver and John Sandford), the two protagonists both come with partners and, in this format, it can be hard to remember whether Amelia Sachs is partnered with Lincoln Rhyme or Lucas Davenport; ditto for Lily Rothenberg.

All four play major roles, as do several other characters, on the way to a double-reverse plot. It’s a fun ride (if you can keep track of it all), but lacks the punch of a good short story told with simpler plotlines. (I confess to having a pet peeve with this story, as well. The use of “vic” for victim, “mic” for mike, and “nic” for nickname makes me cringe.)

The most successful stories are relatively simple. “Red Eye” (Kenzie and Bosch), for instance, has just those two characters in a six- or eight-hour sequence in one location, but the tension builds nicely. I was pulled into the story from the start. Too, Bosch’s character is nicely rounded out by his fear of tunnels, something he could not avoid when going to Boston via Logan Airport.

Similarly, “Good and Valuable Considerations” takes place with Jack Reacher and Nick Heller meeting in a Boston bar, where they check out in a mirror both the bad guy and the “client” they decide to help, all the while keeping track of the score in a Yankees-Red Sox game. Those scenes are excellent. The story’s denouement is fore-ordained, however: typical Reacher violence, with good guys cracking the bad guy’s skull by kicking it “more efficiently” side to side to cause permanent damage. Reacher can’t just leave ‘em unconscious and whole.

The book is a breeze to read — one or two or three stories at a time, and in any sequence. If you’re a fan of thrillers, especially of these 22 thriller writers, you’ll have a good time with this collection.