Where Did You Get This Number?: A Pollster’s Guide to Making Sense of the World

A timely reminder that saying you’re going to vote isn’t the same as voting. 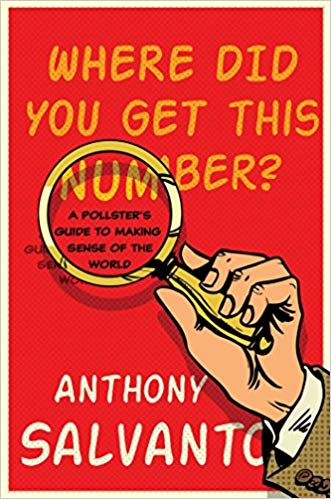 Have you ever actually read the entire text and results of a poll? Me, neither, at least not until I got hold of CBS News Director of Elections and Surveys Anthony Salvanto’s enlightening book that explains exactly what polls are, how they’re constructed and conducted, and what they intend to do.

Salvanto begins Where Did You Get This Number? exactly where many readers do not want to go: November 8-9, 2016. He reconstructs the presidential-election timeline from his perspective, which is as fascinating as it is gut-wrenching.

For example, he describes the Quarantine Room, a secure location — no Internet, no Wi-Fi, no cellphones allowed — where reps from news networks go on Election Day to view early exit polling. Once a rep walks in, she or he is committed to stay there until 5 p.m. They are serious about no leaks.

Sitting at the CBS Decision Desk, which is on-set in the background of the live election-night broadcast, Salvanto made the call for the election of the 45th president of the United States at 2:52 a.m. on November 9, 2016. He and his team had watched enough of a consistently low Democratic voter turnout and the steady wash of red across the map that he didn’t need to see any more.

The author lays out a highly readable discussion using real-world examples that illustrate the value of polling, not the least of which is tracking changes in attitudes, beliefs, and feelings over time.

Salvanto cogently explains why 1,000 people really is all that’s needed to build a representative sample of the U.S. The shorthand is that no one needs to eat the entire pot of soup — or spaghetti sauce — to know what it tastes like. A small spoonful or two is all it takes.

But just like making good soup or sauce takes time and talent, putting together that sample takes carefully developed algorithms and, these days, significant computational power. It’s no accident that Salvanto is a Ph.D., or that he and his peers have spent years in this business honing their understanding of what works and doesn’t work.

He explains the issues with poll aggregations, which lose any connection to the various underlying methodologies and thereby consolidate unalike things. Salvanto’s advice is instead to pick a couple reputable polls, stick with them, and read the full results. He also describes the concept of forecasting, which has been popularized by Nate Silver and his FiveThirtyEight website and is a separate thing altogether.

We learn how poll questions are formed and the nuance of phrasing — for example, avoiding anything that implies what a person should or shouldn’t do or think — and that questions typically attempt to figure out what a person believes, how they feel about it, and what they are going to do about it.

The answers to those three questions are gold to a political campaign in figuring out whether their message is getting through, whether it’s resonating, and whether ultimately it will cause people to follow through as desired.

But it often takes a lot of questions to really figure out what’s going on, and sometimes a campaign poll stops asking when it hears the answer it’s looking for. Salvanto uses the example of a large percentage of people agreeing that Hillary Clinton was more qualified than her opponent to be president, even as that never seemed to equate to a larger overall lead — “a classic problem in Marketing 101 of attributes over benefits.”

CBS asked an additional question: “Which candidate makes you feel more safe?” And the answer there was far more telling.

So what about that whole disaster surrounding polling versus reality from early November 2016? It turns out the polls weren’t really wrong. Beyond the chronic and widespread misreading of poll results, for one thing, polling data was absent from crucial places like Michigan, where Democrats incorrectly thought they had things wrapped up, because attention was focused on the traditional battleground states.

Also, people who told pollsters they hadn’t decided yet just a few days before the election broke overwhelmingly for the eventual winner; reluctant Republicans overcame their reluctance.

And, perhaps most crucially, many respondents who said they were definitely voting, and definitely voting for Clinton, did not vote at all. Was it the James Comey effect, or did the outcome simply seem so certain, based on the prevailing poll numbers, that people felt no particular urgency to vote?

“Think about how much leverage over the world voters have over nonvoters…When Republicans won a House majority in 2014, their candidate totals represented less than one-fifth of potential voters. For the winners, that’s a lot of leverage.”

A functioning democracy demands an informed and engaged electorate. When people say their vote doesn’t count, they are ignoring the increasingly razor-thin margins that decide many races. In January, control of the Virginia House of Delegates was decided by drawing a name from a bowl.

At this writing, early voting in the 2018 midterms is well underway in many states, and the turnout, by all reports, is blasting far beyond previous levels. If it took the outcome of the 2016 election and the ensuing two years of eye-popping consequence to reignite U.S. citizens’ commitment to voting, perhaps that will have been worth it.