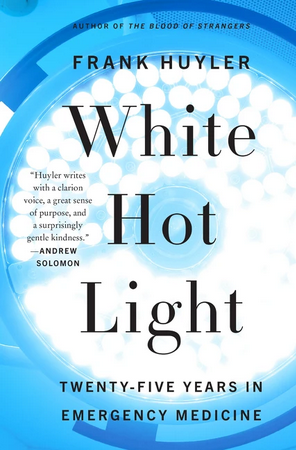 Albuquerque physician Frank Huyler returns with a collection of 30 essays chronicling a quarter-century of his life in — and sometimes out of — the ER. White Hot Light comes more than two decades after his well-received first book, The Blood of Strangers. In this new collection, as in the earlier one, Huyler writes about his colleagues, patients, and the harrowing, exhausting, and sometimes exhilarating work he performs.

From the start, he grips readers with “The Boy,” a haunting story that takes us inside his thoughts as he examines a young teen shot through the heart. It’s an “unsurvivable injury,” yet there’s initially no blood, just a small hole in the boy’s chest. As the team inspects the now-dead body, there’s a shared sense of practical problem-solving mixed with intimacy, reverence, and curiosity.

He follows this opening essay with one recounting the night his own boy was born; another describing a single father who brought his injured-Marine son — his “brain full of shrapnel” — into the hospital; and another recalling the mother of an addict.

Throughout, Huyler makes it impossible not to become emotionally wrapped up in these people’s stories of disease, injury, mental illness, and addiction — their fights to survive and, sometimes, to die. The essay “Mercy,” in particular, demonstrates how complicated a physician’s role as healer can be.

In “The Sleeper,” Huyler and his team are faced with a patient having a heart attack. They act swiftly and save the man’s life. Afterward, while the patient, expected to fully recover, sleeps peacefully, Huyler takes a moment to revel in the triumph:

“Glory, like failure, like so many of the black stories, is private and small in medicine. But there are moments of breathtaking greatness also, and they too pass unspoken like ordinary days, and that night I was very aware that I was looking at the product of greatness, and that I shouldn't deny it. I thought of him waking up in the morning, blinking at the view, and I know from experience that it might seem like nothing to him, that he might easily fail to understand how close he'd come, that like a child he might shrug it off, and never grasp, or wonder, or recognize, and that when his ordinary life continued it would seem as ordinary as ever. But these are the moments we cling to, and as time passes, must remind ourselves to cling to. In a few hours that man would walk out of the hospital under the big western sky with his life before him again.”

These recollections provide glimpses of Huyler as a physician, obviously, but also as a father, husband, friend, and child. His parents, both once teachers at international schools, traveled abroad to England and Japan when he was young, and he revisits the lives that touched him back then — a dear friend, a teacher, the mother of a schoolmate — with clarity and sensitivity. As readers, we see hints of how those moments continue to shape the author in middle age.

The essays in White Hot Light can be read separately — in fact, many have appeared on their own elsewhere — but together, they speak powerfully, like the music on an album.

I can’t help but consider the impact of this book’s release in this age of covid-19, when we’re seeing not only heroism, ingenuity, and compassion from healthcare workers, but also their humanity and vulnerability. Frank Huyler provides an inside view of these heroes’ lives at a time when we need it most.

Formidable: American Women and the Fight for Equality: 1920-2020

A dense, comprehensive look at an ongoing struggle.