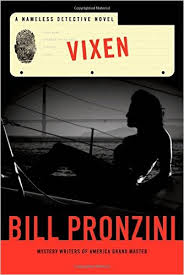 Bill Pronzini must have a closetful of mystery-writer awards. His “Nameless Detective” series has been acclaimed by just about every contemporary or newcomer in the field. Individual titles have also won prestigious awards. Vixen, the 44th in the series (and an expansion of his 2012 limited-edition novella, Femme), justifies all the accolades he has received since launching his career in 1971.

Pronzini has a quiet, plain, and yet infectious style. His plot is complex but easy enough to follow without leafing backward. He holds his readers with his art of penetrating character development and redolent atmospherics. Pronzini makes an easy read seem easy to write, but it can’t be when his novel is so totally satisfying and hauntingly noir.

“Nameless” (hereafter known as Bill in this review, as he is in the novel) is engaged by the stunningly beautiful, erotically charged Cory Beckett — a control freak who knows how to get what she wants. And what she wants from Bill and his detective agency is for them to find her missing younger brother, Ken. Arrested for having stolen an expensive necklace from his wealthy employer’s wife, a terrified Ken has left town rather than face trial.

Jake Runyon, who works for Bill’s agency, tracks him down. Ken is nearly out of control with fear of being tried and found guilty, but fear of his sister’s displeasure is even greater. Femme fatale Cory lies about everything to achieve her ends, but uses the promise or reality of super sex to blind her male victims (or simply make truthfulness irrelevant to them).

It’s not immediately clear if she wants to protect her brother from the theft charges or sacrifice him to spare herself from prosecution. Ken isn’t a druggie, but Cory claims he’s an addict to explain his unstable, erratic behavior, which actually results from his crippling dependence on her.

Cory lines up lovers and potential husbands only to satisfy her greed for wealth and power. As the mistress of yachtsman and political power player Andrew Vorhees, she might wait for his separation from his wife to turn into divorce — or she might make him available as a husband some other way. And she can use the spell she’s cast over packing-materials manufacturer Frank Chaleen, already “in bed” with her effort to frame Ken for the theft, and take further and faster steps to riches.

To say too much about the complications of the plot is to give too much away. Clearly, Cory is not a client for long, and the efforts of Bill and Jake turn more and more toward blocking her schemes and saving her potential victims, especially the beleaguered Ken.

Intriguing supporting characters add depth and context to the tale. One of these is Tamara Corbin, a young business-management dynamo and partner in the detective agency. In her late 20s, she is positioned as a kind of sane, morally balanced alternative to the demonically possessed Cory, who is the same age.

The psychological portrait of Ken Beckett is superbly drawn, with all of its complications of unworthiness, guilt, and desperation richly realized in dialogue and action. Vorhees and his alcoholic wife are totally believable as self-interested types used to power and influence yet easily manipulated by Cory.

Frank Chaleen, whose business is failing, has his own kind of desperation. Sometimes he sees through Cory and knows better than to join her deadly dance, but she has the black magic to turn him into a puppet.

The San Francisco area that Pronzini portrays includes — but goes far beyond — the tourist landmarks. Jake Runyon tracks down Ken, whose usual employment is with marinas and other boating-related establishments, by checking on them one by one.

He gets a line on Ken by asking questions at the Port Somona Marina on the Petaluma River. One of the boat owners there sends him upriver to Belardi’s. The description of this isolated place — its aged, worn-out buildings, its owner, and the surrounding fishing shacks — is worth the price of admission. Runyon’s confrontation with Ken is a marvel of interaction between characters and setting.

Runyon discovers that the necklace was not stolen in the first place. Chaleen had put it in Ken’s van. He had first received it from Mrs. Vorhees, who wanted it planted in Cory’s car in order to discredit her; however, it ended up implicating Ken. The dialogue between Runyon and the emotionally tortured Ken is exquisite, as is the description of the place Ken is staying.

Similarly sure-handed and evocative is Pronzini’s description of Chaleen’s Basin Street factory near the Islais Creek Channel, as well as the surrounding commercial neighborhood. Again, investigator Runyon’s interrogation of an unwilling respondent is first-rate dialogue writing.

The main characters, Bill “Nameless” and Jake Runyon, are defined far beyond the limits of this case. We get to know them as well through memories and scenes that reveal their domestic relationships past and present.

Bill Pronzini knows how to put all the pieces together: watchmaker plotting, shifting points of view, vivid scene-setting, memorable characters, terrific pacing, compelling dialogue, and a fascinating interplay of the monstrous and the mundane. All this with the leanness of Keats’ classic ballad.