Love striking, tour-de-force tales? This one's right up your alley. 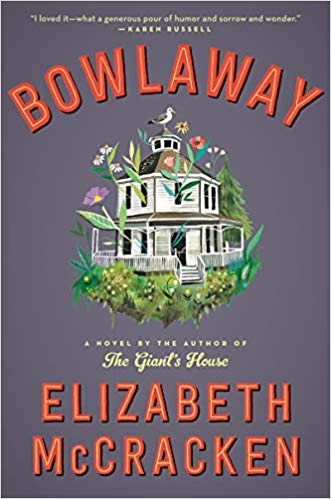 Elizabeth McCracken’s Bowlaway is a perfect novel. It takes classic narrative techniques and turns them into Greek drama. It is the very best kind of old-fashioned story molded into a modern chronicle. If it were a 19th-century novel, it would come with a frontispiece of a family tree, which would be appropriate for the jigsaw genealogy of Bowlaway.

The story thrives on twisted limbs. There are orphans and lost wills, hidden safes and secret fortunes, a packet of abandoned letters. There is love in its various guises — of cats and birds, abandoned and hidden, forbidden and generational.

If early John Irving and late Elizabeth Strout had a fictional child, with a nudge from Charles Dickens and Sherwood Anderson, it would be Bowlaway.

Who would think that a candlepin bowling alley in a small town in Massachusetts could provide such an interesting setting and prove such a viable subject for an invigorating novel?

In many respects, bowling serves as a rich metaphor for life and love. In New England, it is a “game of purity…a game of devotion.” A candlepin ball is “small, two and a half pounds, four and a half inches in diameter, a grapefruit.” It has enough heft to function as a weapon. It also serves as an object of affection:

The “heedless headstrong ball hurtles nearsighted down the alley. It has to get close before it can pick out which pin it loves the most, which pin it longs to set spinning. Then I love you! Then, blammo. The pins are reduced to a pile, each one entirely all right in itself. Intact and bashed about. Again and again, the pins stand for it until they’re knocked down. The ball return splits up the beloveds, flings the ball away from the pins. You stay there. The ball never does, it’s flung back by the bowler, here it comes flying, blammo.”

The primary mover of Bowlaway is Bertha Truitt. She is the ostensible heroine, the protagonist who claims (however falsely) to have created — as it will eventually say on her tombstone — the “SPORT OF LADIES AND GENTLEMEN.”

Like Peggy Cort, the 25-year-old librarian in McCracken’s stunning debut, The Giant’s House, Bertha is a woman with her own mind and sense of direction. And, as that 1996 book dealt with severe love, Bowlaway focuses on challenged relationships. Both Bertha and Peggy are “ruined by love or the lack of it.”

No one knows much about Bertha when she appears “above ground and alive” in Salford Cemetery at the turn of the 20th century. It is as though she had “dropped from the sky.” And, for most of the novel, that’s how it appears.

Even to the two men who find her in the cemetery: 19-year-old watchman Joe Wear and “colored doctor” Leviticus Sprague. They discover her with a portmanteau, her gladstone bag filled with “one abandoned corset, one small bowling ball, one slender candlepin, and, under a false bottom, fifteen pounds of gold.” Those seemingly peculiar unrelated treasures define Bertha’s character, appearing and disappearing on various occasions.

Joe and Leviticus are the dominant forces in Bertha’s life. She marries Leviticus, opens Truitt’s Alleys, and hires Joe to manage them. She is certain that if she builds the lanes, customers will come. And they do.

The alleys soon become a gathering spot for the neighborhood. They function as a community center, a cathedral of love. Somewhere everyone can get together, somewhere that “gave you something to think about besides your regrets.”

One of the unusual features of Truitt’s Alleys, unlike other bowling establishments, is that it welcomes women. Four of them — LuEtta Mood, Hazel Forest, Mary Gearheart, and Nora Riker — are organizers for the social activities of the lanes. They all seek “a kind of greatness that women weren’t allowed.”

Along with Bertha, they each seem to be in mourning and see the alleys as an outlet for personal laments. LuEtta, who believes Bertha was “trained on a trellis of sorrow,” bowls to dampen the grief of a lost child. Hazel, a suffragette and surgical nurse, says she understands “the inside of bodies” as well as the outside.

Then there’s Mary, the youngest, at 17, who “bowled to keep her hands busy” in order to “keep the throwing, smashing part of her brain busy”; and Nora, married to a “hard-cornered man,” who desires a “game she could beat him at.”

One other building becomes a community landmark — a distinctive octagonal house that Bertha and Leviticus build. It is modeled on Orson Squire Fowler’s architectural theories. Fowler, like Bertha, was a major proponent of both phrenology and women’s and children’s rights.

The Sprague house has large rooms, a “stepped-back third floor,” and is topped with a cupola. Its walls are “filled with lime and gravel and ground rice, and stuccoed with a combination of plaster and coal dust.” It promises to “make its occupants happy.” It isn’t as much good-looking as it is a “spectacle.” Neighbors call it the Wedding Cake; Bertha names it Superba.

For Bertha and Leviticus, it is a haven from the harsh eyes of those who look upon the mixed-race marriage as unsavory. A spiral staircase in the middle of the house defines their relationship — it “amplifie[s] ill will…and tangle[s] feelings all round.”

When they argue, Leviticus takes exterior stairs (“built into the plaster outside”) up to the widow’s walk cupola, which he calls the belvedere. The spiral staircase figures prominently in a startling scene during the birth of their daughter, Minna, in 1907.

Two other characters are influential in the Sprague family saga — Margaret Vanetten, a hired girl, and Nahum Truitt, who may be Bertha’s long-lost son.

After one character dies in a freak accident during the historic 1919 Great Boston Syrup Flood, and another succumbs to spontaneous (perhaps grief-sparked) combustion, the Pruitt family tree adds another limb when Nahum appears out of nowhere, altering everyone’s lives.

Nahum swoops in to claim inheritance of the bowling alleys. His evidence is a family Bible which apparently supports his lineage. There, in “flourishes and serifs,” is a declaration that Bertha Truitt was born in 1855. But the rest of the family tree “had been bowdlerized.”

Nahum institutes major changes, beginning with banning women from the premises. He claims that “Men need a place to come together in fellowship.” He installs a pool table “so that more men may commune.” But, first, he says, “Clear out the gals.”

The women rebel, to no avail. After a “one game challenge” between Nahum and LuEtta, Nahum leaves for Maine. He returns (to everyone’s shock) married — to Margaret Vanetten, the Spragues’ hired girl.

That’s more than enough story for most writers, but not for McCracken. Only halfway through Bowlaway, there is much more for her to reveal:

“The future is coming. It always is. We have generations to get through first, marriages and divorces and widowhoods and remarriages, the yoking of families, the unyoking. The disappeared and misattributed. The pathetic life spans of dead children, the greedy awful life spans of the very old…The damage you’ll do to the family tree…That’s for later. Patience.”

The reader’s patience is richly rewarded as the remainder of the novel unfolds with flashbacks and flashforwards (sometimes in a single sentence) about Bertha and Nahum, Margaret and Minna, LuEtta and Joe. What’s in store is a head-spinning series of revelations which culminates in a gathering of more freak accidents and misadventures and a succession of new characters.

By the 1950s, automatic pinsetters have replaced pinboys, but plus ca change, plus la meme chose. Disaster and dysfunction continue to shadow descendants of the bowling-alley clans.

Bowlaway is a totally immersive experience. It has everything — scalpel-edged prose, fully delineated characters, vividly described regional settings, a satisfying storyline, and an unforgettable powerhouse ending. It is unstoppable entertainment.

Though it’s early in the reviewing year, this is likely the best novel of 2019. It is Elizabeth McCracken’s masterpiece. Bowlaway will blow readers away. Blammo.

After tragedy strikes an all-girls school, students come face-to-face with its secrets.