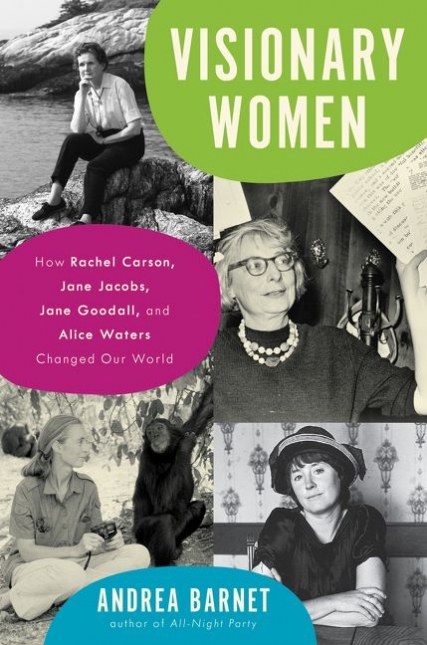 Comprising biographies of Rachel Carson, Jane Jacobs, Jane Goodall, and Alice Waters, Visionary Women demonstrates how the four revolutionized our paradigm for understanding the relationship between ourselves and the natural world.

Environmental consciousness and sustainability are common concepts today, but in the 1950s, before each of these women rose to prominence, they were practically unknown ideas, running antithetical to the post-war emphasis on mechanization, standardization, and the unrelenting expanse of synthetic products.

Moving chronologically, author Andrea Barnet begins with Carson (the oldest of the group) and ends with Waters (the youngest), painting detailed pictures of their lives and work. Each was a diligent researcher and author, and each took an unconventional route to recognition. Despite their different fields — pesticides, urban housing, primatology, and gastronomy — however, they shared numerous traits and methodologies.

Rather than view living things as part of a hierarchy, for instance, all four saw life writ large as a web of interconnected parts. They understood, and spoke boldly about, “the long-term implications of what had seemed ingenious new implements of progress.”

In Silent Spring, Carson described the fatal impact of pesticides and chemicals on people, but because she connected those individuals to a broader system, she conveyed toxins’ widespread risk to all living beings.

Likewise, Jacobs viewed city blocks as interconnected organisms where diversity of population and land use enriched the social environment, as opposed to the sterile single-use developments of city planners who supposedly knew better.

Goodall not only immersed herself in the world of chimpanzees to gain an understanding of their behavior, she also recognized that only when humans had continual access to sufficient resources would the environment for chimps be protected.

And Waters started the farm-to-table movement by highlighting the connections between local producers and consumers, while also showing how the disconnect between modern food and modern consumers resulted in lost nutrients and separation from the land around us.

Barnet does well to follow this thread of interconnectivity. She also deftly emphasizes that these women were outsiders in their professions in terms of their educational credentials and gender. This status gave them an independent streak of thought sorely lacking in their chosen fields. Since they weren’t part of an establishment, they were better placed to challenge it.

This also meant they faced resistance to and dismissal of their ideas and scholarship. Their arguments were controversial to begin with, and as women delivering them, they were dismissed as simplistic or even ignorant. Their ability to withstand such criticism made them important forerunners of the growing women’s movement.

Feminism, however, has recently made strides in embracing intersectionality — the understanding that women of color have been marginalized in women’s movements, that the LGBTQ community hasn’t been treated in an inclusive way, and that the rights of all people are fundamental to the rights of women.

Visionary Women, while it gives due credit to four trailblazers who made significant social impacts, ignores the intersection of these issues and communities, which leaves it wanting as part of the feminist canon.

For example, the reader is assured that Jacobs “deplored” the racist housing policies that fueled urban blight, but the practice of redlining and the racially biased policies underpinning that blight receive barely two paragraphs.

Similarly, Carson’s romantic relationship with another woman is brushed off as most likely sex-free — despite the author’s lack of supporting evidence — and Carson’s identity as a non-gender-conforming person is ignored.

Barnet states early in the book that the reason she chose these four women is because they “were trying to preserve and restore systems they saw as threatened.” Essentially, they advocated reclaiming a way of viewing the world that had been lost in the technological proliferation during and after World War II and that reached back to the Industrial Revolution.

She opted not to profile those who aimed to overturn existing social structures, and so her choices, such as leaving out Betty Friedan, are sensible. Yet the fact that no minority women were included (or acknowledged) doesn’t mean none worked towards this goal.

Despite missing an opportunity to broaden the context of feminist reformers, this book provides valuable biographical data and weaves together commonalities in women who challenged and changed our social systems. It reveals lively details and anecdotes about four unquestionably important 20th-century figures and demonstrates their role in shifting our consciousness about humanity’s place in the world.