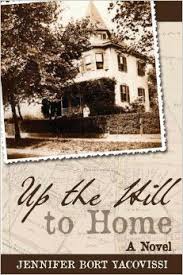 "Remember, Lillie," a professor tells the protagonist of Jennifer Bort Yacovissi's Up the Hill to Home, "good and bad both, our history conspires to make us who we are." This is the point the author strives to illustrate in her debut novel as she weaves Lillie's story together with those of her parents, grandparents, husband, and even the city of Washington, DC.

Lillie Beck Voith is many things. Only child of Charley and Emma Beck. Wife of Ferdinand (Ferd) Voith. Mother of nine — soon to be 10 — children. The calm, loving center of the Beck-Voith household. The novel opens as Lillie, determined to get some laundry started while the rest of the family is at church, trips and falls down the stairs into the basement.

At first, she feels foolish and wants to brush the incident off, not wishing to worry anyone. But as the book goes on, it becomes clear that Lillie will suffer from more than just a few bruises, and the family will be forced to pull together and face the possibility of losing its core.

But the story of Lillie is not one of her failing health. Instead, we are drawn into the tales of her parents' courtship, her grandfather's history as a doctor in the Civil War, Lillie's childhood, and her constant wish for a sibling. We learn about Lillie's Catholic upbringing, her marriage to Ferd, and the subsequent birth of their children. The story of Lillie Beck Voith is the story of her family, of the people whose lives shaped hers.

The book is long, stretching to 472 pages, but instead of simply moving from beginning to end, Yacovissi breaks it up, writing vignettes of the family's life, shorter stories that bring us into Lillie's world. She moves back and forth between the present and the past, shifting focus from one character to another, every so often bringing us back to the main story’s question: whether or not Lillie will recover from her fall.

Yacovissi shines in her descriptions of daily life, whether that life is taking place in Civil War-era Washington as Jubal Early and his Confederate troops are closing in, or in the crowded mid-1930s household that Lillie calls home as the book begins.

She brings the people and the places to life in such a way that they take up residence in your imagination, fully formed and breathing. It is the details the author conjures — from the struggle of wrestling the Easy Wash from the porch, to the depiction of the children's wonder at the shoe store’s X-ray machine — that make this possible.

The novel is also full of complex characters, each with their own personalities, failings, and desires. Charley, Lillie's father, is optimistic, hardworking, and ornery, with a level head on his shoulders and a sense of purpose that never wavers.

Emma, her mother, was older when she married Charley and had Lillie; she’d been sure that such things would never happen for her. And so Lillie becomes the center of her world. Ferd is the suitor who will not be turned away, whose love for Lillie is immediate and total. But he is also frustrated by Lillie's refusal to leave her childhood home and establish one with him.

Yacovissi's descriptions are lively, too. She writes that a Washington summer "oozes in on a glistening slime trail to suck initiative and industry from the inhabitants like a vast, enveloping leech."

When Mary, Lillie's grandmother, finds out that General Early’s troops have gone and the city is safe, Yacovissi captures that release of tension that has consumed her for days, writing that "She feels like someone has caught her frayed end and she has unraveled in one pull."

It is no surprise, then, to learn that much of the story is based on Yacovissi's own family. Lillie Beck Voith was, in fact, her grandmother. Yacovissi’s mother, Jeannie, was Lillie's youngest child. The book is fictional, but it’s evident the author put a lot of love into telling the story of her family. In that sense, it’s partly the story of Yacovissi herself and the history that conspired to make her who she is.