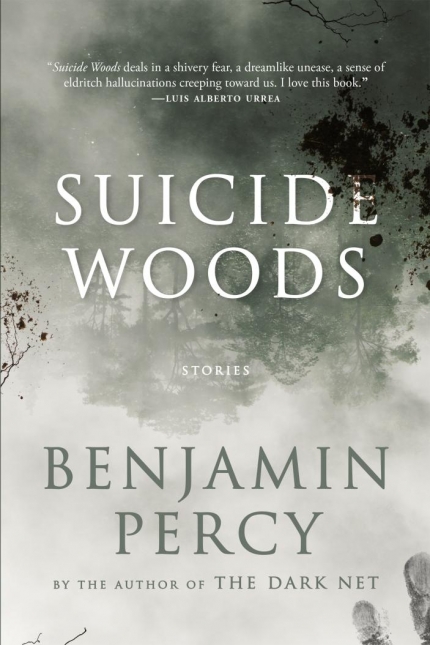 A bear mauling humans and squeezing into their clothes to do the shopping. People willingly buried alive to alleviate suicidal tendencies. Time-traveling, murderous telephone calls. A corpse on a train. Embodied memories that haunt, taunt, and refuse to be ignored.

Over the course of nine short stories and a novella, Percy lures readers into a world that is part real, part surreal; as a character aptly remarks, the narratives give the impression of “a dream that still flickers around the edges of your mind as you’re brushing your teeth, changing out of your pajamas.”

This merging of reality and dream states has a powerfully unsettling effect, implying that much of what we accept as normal is, in fact, more than slightly Kafkaesque and underscoring a central theme of the collection: that the real nightmare is the one we create for ourselves by attempting to constrain or conquer nature — both human and environmental.

Each of the narratives explores some variation of this theme. The protagonist of “The Cold Boy” is a taxidermist who gets a startling new perspective on his efforts to cheat or camouflage death. “Suspect Zero” exploits the dead-blonde trope of traditional hardboiled crime fiction, inflicting punishment on those who would stereotype or underestimate the power of women, while “The Dummy” builds on this thread, examining the social forces that pressure trans and non-binary people to inhabit bodies and characteristics that belie their true nature.

In “Heart of a Bear,” Percy channels Mary Shelley to exhibit the absurdity of attempts to transcend nature and instinct. His bear, like Shelley’s Frankenstein, is as ill-fitted at mimicking humanity as humans are in their assurance that they can usurp wild beasts as master predators of the forests and jungles — or, for that matter, in their efforts to suppress their emotions and dedicate themselves to unfulfilling occupations.

“Dial Tone,” “The Mud Man,” and “Writs of Possession” ramp up this statement about our dehumanizing focus on employment and finances. The first immerses us in the dissociative reality of cubicles, telemarketing, and compassionless business communications; the second offers a darkly humorous take on our emphasis on work over home life; and the third follows a member of the sheriff’s office as she delivers eviction notices, attempting to convince herself that the people thus rendered homeless have brought their fate upon themselves.

The final three entries in the collection explore characters with feelings deemed dangerous or abnormal by society. The antisocial heroine of “The Balloon” benefits from her intractable obsession with fairytales, while alternatives to the self-destructive inclinations of characters in “Suicide Woods” and “The Uncharted” prove more hazardous than the ills they are meant to alleviate.

“The Uncharted,” the last and lengthiest narrative in the book, draws out the background of two characters — a woman who represses her feelings and is fearful of human connection, and a man pressured to channel his anxiety and frustration into a lucrative but dangerous business opportunity — as they search for a missing group of mapmaking adventurists in a remote area of Alaska.

This coup de grace of the collection unabashedly compares attempts to survive and chart inhospitable land with efforts to overcome, rather than address, complicated emotions. Ultimately, nature proves itself indomitable, and our efforts to conquer it are framed as little more than vain colonialist ambition.

All of this might sound irredeemably bleak and misanthropic, but Percy nestles shimmers of hope in the dark forest, as it were. Unlikely romances that surmount convention; a bizarre, touching testimony to nurturing instincts; and people determined to help each other — even if their efforts are ill-advised or futile — all weave their way into the storylines.

Above all, the language throughout is remarkable: sharp and stinging, yet replete with desolate, hypnagogic beauty. Settings are imbued with distinct personalities, from a numbing winter forest possessed by “crows…all huddled like little men in black jackets…muttering to each other in rusty voices” to an unnaturally lit office comprising a “vast hive of cubicles” and managed by men whose “bulging bellies” resemble “feed sacks that might split open with one slit of a knife.”

This precision of language and metaphor is most affecting when it immerses us in the characters’ peculiar worlds. These range from the extremely sympathetic to the psychopathic: a young man wracked with guilt after surviving a car crash that killed his whole family; an elderly woman who cannot bring herself to share the pain of “the arthritis chewing at her fingers…the cataract that fogs over her left eye”; a serial killer over-confident in his stalking of victims; and a would-be rapist who quickly learns that his intended prey is “in fact the blade and not the meat to be butchered.”

Poignant, caustic, empathetic, and extremely relevant to our contemporary social climate, the narratives in Suicide Woods linger like a not-unpleasant, post-migraine aura, framing perceptions of what we accept as normal in our surroundings — and in ourselves — long after their sometimes-inconclusive conclusions.