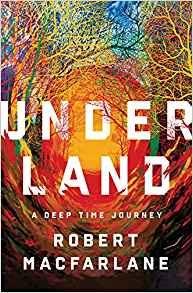 To write Underland: A Deep Time Journey, Robert Macfarlane becomes a modern-day Indiana Jones. He squeezes himself into tunnels beneath Paris, speeds through potash mines with a dark-matter scientist in England, and narrowly avoids falling down a crevasse on a mountainside in Norway.

Unlike Dr. Jones searching for the Ark, however, Macfarlane is in search of wonder and an understanding of time:

“‘Deep’ time is the chronology of the underland…It is kept by stone, ice, stalactites, seabed sediments and the drift of tectonic plates…For to think in deep time cannot be a means of escaping our troubled present, but rather of re-imagining it; countermanding its quick greeds and furies with older, slower stories of making and unmaking.”

The idea of reimagining time echoes throughout the dense Underland. It can even be felt in the way the text zooms in and out as if distance and time were moldable. It focuses in on fungus networks on the floors of caves; it zooms out over the vast expanses of Greenland’s glaciers.

Many authors would crumble under the massive amount of information found in the rocky layers of Underland’s pages, but not Macfarlane, whose other works include The Lost Words, a children’s book written in the form of an incantation about the natural world, and Landmarks.

The latter is a vocabulary-obsessed work that defines hundreds of landscape-specific words in English, Welsh, and other tongues spoken in the U.K. This natural lexicon seeps into Underland. Macfarlane describes sea-ice cycles as “frazil, grease, nilas, grey,” and lyrically recounts his experience in a Slovenian tunnel: “I run the scree, skidding down to green sloping pasture sewn with paths made by chamois and by people.”

The terrains in the book are complicated and beautiful. Each space exists in a complexity often looked over by a humanity that wishes to fence off and categorize. “Natural” and “unnatural” serve us as little as all the other binaries we are now deconstructing.

Macfarlane juxtaposes the underground scenery in front of him with the ecological, literary, and historical significances of the spaces. The way he chooses to contextualize his different “underlands” is also so inclusive, it’s juicy. In one paragraph, he could be quoting ancient Arab lore, then a significant theorist in the next, and David Bowie after that.

If we put Indiana Jones and Robert Macfarlane in the same room and compared their notes, Macfarlane’s reading list would probably be more impressive. Literary references throughout Underland include those from the Western canon such as Walter Benjamin and Edgar Allan Poe, plus The Epic of Gilgamesh and many others.

The reality of ecological destruction and manmade climate change is no longer discussed exclusively by scientists, environmentalists, and nature lovers. It is now at the center of our consciousness. Yet, so often, those ringing the warning bells neglect to mention the actual physical landscapes we are losing. We forget that we cannot fight for, protect, or even mourn that which we will not name.

Macfarlane learned this lesson and insists on naming. He reminds us of the things we have left, and why saving them won’t just spare us from massive food shortages, super storms, and political upheaval; it will also keep us from living in a world less full of delight.

On his journey to find cave paintings in Norway, Macfarlane tells us about what old Celtic Christians once referred to as the “thin places,” where different realms or worlds met. In myth and spiritual practice, caves were among these sacred sites.

Perhaps we are in a “thin place” now in our history. What we decide next could change the fate of the planet. Underland may help us choose more wisely.

Gretchen Lida is an essayist and an equestrian. Her work has appeared in the Washington Post, the Rumpus, the Los Angeles Review of Books, and many other publications. She is also a contributing writer to Book Riot and the Washington Independent Review of Books and is working on her first book. She teaches composition in Illinois, lives in Chicago, sometimes resides on Nantucket Island, and is still a Colorado native. Find her on Twitter at @GC_Lida.