Under the Bus: How Working Women Are Being Run Over

A call to action for those left behind in the fight to secure fair labor standards. 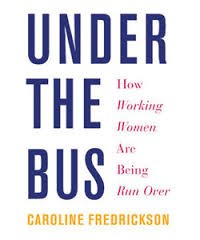 From leaning in to opting out to mommy track to having it all, the debate over women and work continues to rage. Caroline Fredrickson enters the fray from a different angle.

For her, this debate has deeper underpinnings that tend to get overlooked in the navel-gazing and whining columns often written by women who enjoy an array of choices. These usually are women who have benefited from laws against gender discrimination in jobs and pay and who can take advantage of family leave legislation.

Not that they, too, don’t have legitimate concerns and grievances about the lack of flexible workplaces and paid leave. But there is another tier of working women that has historically been exempted from many core labor benefits, including domestic workers and part-time employees. Fredrickson sets out to show us how that happened and what needs to be done.

In Under the Bus, she charts a damning trajectory of special interests consistently excluding women from laws and initiatives aimed at ensuring decent wages and working conditions. At times, it can be discouraging to read through accounts of the persistent problems that still hinder women, including the lack of affordable child care, pay inequity, and the undervaluing of occupations that remain viewed as “women’s work,” such as nursing and housecleaning.

While reading this book, I came across a recent study from the Institute for Women’s Policy Research that found women are nearly twice as likely as men to work in occupations with poverty wages. The IWPR also projected that women in the United States won’t achieve equal pay until 2058.

Fredrickson offers similar discouraging statistics throughout Under the Bus that back up why she calls the New Deal a “raw deal” for women and minorities. She notes that the “National Recovery Administration explicitly pegged women’s wages below men’s, even when they were doing the exact same work. For example, men in the garment industry coded as ‘Jacket, Coat, Reefer and Dress Operators, Male,’ earned $1 per hour, while the code ‘Jacket, Coat, Reefer and Dress Operators, Female’ paid only 90 cents per hour.”

The National Labor Relations Act and the Fair Labor Standards Act, as passed in the 1930s, did not cover domestic workers or farm workers, thus excluding many women and minorities from its provisions. “The implications of these exclusions have been profound, denying a growing workforce the basic workplace protections many of us take for granted,” writes Fredrickson.

Fredrickson does her best to keep the reader engaged with cogent writing and a liberal sprinkling of anecdotes about real people — for example, a nanny who loses her job because she has to care for her own sick child. She also hits hard on the still-unfinished fight for pay equity, including the oft-told story of Lilly Ledbetter.

At times, though, Under the Bus, with its meticulous case-building, can veer toward the wonky. Fredrickson is a lawyer, and her turf is policy. She is president of the American Constitution Society, past director of the ACLU’s Washington legislative office, and worked on the Hill for then-Senate Democratic Leader Tom Daschle. She not only thoroughly researched her subject, she was a firsthand witness to some of the history she describes.

After recounting how the Fair Labor Standards Act and other New Deal legislation excluded domestic workers and how later labor laws allowed exemptions for small businesses that also often tossed women “under the bus,” Fredrickson writes: “I have unthinkingly worked to put these exclusions in other bills.” She explains that, as counsel to the Democratic leader, she modeled new workplace legislation on preexisting language in these other laws.

She says “it is now so much clearer to me how many vulnerable workers are left out of the successful efforts to make the workplace more just. I imagine if I had tried to eliminate the size and other exclusions or even to reduce their impact, the lobbyists for business would have come out of the woodwork and the pushback would have been fierce. But I didn’t even think to try; that’s what disappoints me the most.”

Perhaps that disappointment helped fuel the passion she brings to Under the Bus. It is not just a dissection of past policy, it is a call to action. She wants us fired up and ready to push for change. Her to-do list includes raising the minimum wage, paid family leave, flexible workplaces, and updating the definition of employee so that anyone doing work for a company is covered even if that person is a part-time worker or an independent contractor.

In her utopia, “True choice means that women who want to stay home with children do that because they want to and not because lack of paid family leave and child care, unequal pay, and fewer job opportunities make staying the in the workforce impossible.”

Those aren’t new ideas, and much of her material covers well-trod ground. Fredrickson pulls from the excellent research done by the Shriver Report and by organizations including the Institute for Women’s Policy Research. She may be largely preaching to the choir, but she also is prodding that choir to come together and act.

She does point out some bright spots, including laws in New York, California, and Hawaii that improve the status of domestic workers. But, for now, those bright spots still leave the United States trailing far behind other developed countries in how it treats women in the workforce.

Linda Kramer Jenning is president of the Journalism and Women Symposium and on the board of Running Start. She is an adjunct professor of journalism at Georgetown University and former Washington editor for Glamour.

By Grant Rumley and Amir Tibon