A Great and Glorious Adventure: A History of the Hundred Years War and the Birth of Renaissance England 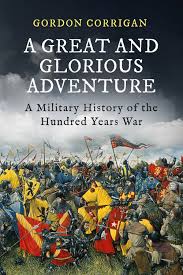 William the Conqueror, in 1066, set a high bar for future English kings: rule England while also controlling French territory. King Edward III aimed at this high bar when he invaded France in 1337, starting the Hundred Years War because he wanted to become king of France as well as king of England.

The English and French fought the war sporadically — a series of campaigns broken up by long truces — from 1337 to 1453. Author Gordon Corrigan observes: “No one who…cheered as the soldiers of the first English expeditionary force of the war sailed for France under Edward III was alive to welcome the men returning from the last campaign.”

A Great and Glorious Adventure details the military history of the Hundred Years War. Corrigan writes about the soldiers, about weapons and tactics, about the provisioning of armies, about how French terrain affected the fighting. He shows in gory detail how this war undermined the military basis of feudalism. At the battle of Crecy in 1346, when “the flower of French chivalry lay dead on the field,” at least 1,500 French nobles had been killed by the new technology in English soldiers’ hands: their longbows.

According to Corrigan, the English longbow men at Crecy would have been able to shoot 15,000 arrows within 30 seconds, killing Frenchmen and terrifying horses, so that “what had originally been a smooth and open approach to the English line became an obstacle course of dead and wounded men and horses.”

Ten years later, at Poitiers, French soldiers and horses wore plate armor, hoping for better protection against English arrows. The first volleys of arrows did indeed glance off the plates, leaving men and beasts unharmed, but then a clever English officer, the Earl of Warwick, ordered the archers to shoot at horses’ unarmored legs. Horses with arrows in their legs reared and dumped the French riders, then turned and galloped away from the battle. English archers had once again gained the upper hand.

Gordon Corrigan likes the English. In the book’s introduction, he writes that historians must be fair in their use of sources, treating the facts with accuracy. Historians must ”present both sides of the argument,” he says, “but they do not have to be neutral.” He is not neutral, taking pride in the achievements of Englishmen in the Hundred Years War, notably the achievements of Edward III, his son Edward the “Black Prince,” and Henry V. He does not ignore the cruelty of these men’s exploits.

Here he writes about the Black Prince: “To modern eyes, his conduct on campaign — the burning, the leveling of towns, the destruction of crops — is nothing short of criminal, but it was the normal mode of behavior in an enemy country at the time…Overall, the verdict of history — British history at least — is that Edward was a great soldier, a great Englishman and a worthy occupant of the British pantheon.”

In Shakespeare’s telling, Henry V, like Corrigan, saw this war as “great and glorious.”

“And gentlemen in England now abed
Shall think themselves accursed they were not here;
And hold their manhoods cheap whiles any speaks
That fought with us upon St. Crispin’s day.”

Thus spoke Shakespeare’s Henry on St. Crispin’s Day 1415, before the battle of Agincourt, where English archers let fly 25,000 arrows in the first 30 seconds. Then the archers dropped their bows, drew their long knives, and “stabbed through visors and severed hamstrings.” Corrigan calls Agincourt “a great and stunning victory, ranking with Blenheim in 1704, Waterloo in 1815 and Amiens in 1918.”

The English won great battles, but they did not win the war. They had trouble holding French territory in between the battles. The English Parliament tired of raising money to fund the war. Moreover, in 1429, Jeanne d’Arc revived French patriotism when she called on the English to end their siege of Orleans.

The English withdrew from Orleans “because they had bitten off far more than they could chew,” according to Corrigan, not because of Jeanne. “To suggest that Jeanne was a military commander who planned the movement of troops and led them into battle, as some historians do (mainly French but some British ones too), is surely not believable.” The French subsequently improved their army and, in 1453, the English left France, giving up their struggle to control French territory.

The phrase “birth of Renaissance England” in the title may mislead readers. Only three of the epilogue’s six pages describe changes that took place in England as a result of the war. The book’s 15 maps, notes, and bibliography all pertain to the war. It is the war that inspires the author, whose concluding sentence calls the Hundred Years War “a great adventure, and a great and righteous cause.”