The Rise of Andrew Jackson 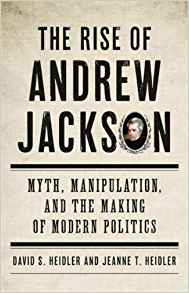 Authors David S. and Jeanne T. Heidler offer up one possible antecedent to the Trump phenomenon in The Rise of Andrew Jackson: Myth, Manipulation and the Making of Modern Politics. The parallels are imperfect, but both cases remind us how popular democracy can lead to unsettling results.

The Heidlers don’t present their book as a primer on Trumpism; in fact, the T word is never used. But it’s impossible to read about a self-promoting, mean-spirited, unreflective avenger of petty slights sitting atop our national government without a certain orange head floating into mental view. Plus, Trump has embraced Jackson as a favorite predecessor even as the older president’s reputation has ebbed so low as to threaten his portrait’s place on the $20 bill.

The book’s stated purpose is to present the genesis of the process — loud, messy, full of ridiculous distractions and transparent lies — through which we exercise the solemn duty of picking our chief executive. The authors convincingly argue that the Jackson campaign pioneered techniques that transformed the political process and are still with us today: image and message control, centralized campaign planning, and manipulation of the media.

After four eight-year presidencies of aristocratic Virginia planters — interrupted only by the cantankerous single term of New Englander John Adams — American politics was, by the 1820s, fresh out of founders. Politics was suddenly an open field the backers of Andrew Jackson rushed to occupy.

Their job was to transform an unlettered military leader, with a murderous temper and plenty of personal and professional scandals for opponents to mine, into a viable presidential candidate. For most Americans, he was famous for a single event, albeit it a much-celebrated one: the victorious Battle of New Orleans that gave a misleading sheen of success to the War of 1812.

The long presidential campaign waged by Jackson and his handlers began several years before the end of James Monroe’s presidency and continued through that of John Quincy Adams. Jackson and his followers angrily rejected as illegitimate Quincy Adams’ 1824 election because it was decided by a deal-making House of Representatives when no one in the multicandidate race obtained a majority of electoral votes. Jackson had won the popular vote. They set up a massive resistance to the new administration and kept on running, finally winning the White House four years later.

Jackson’s rise was made possible by a rapidly changing nation. Elites of the Eastern Seaboard viewed with alarm the boisterous politics emerging from the new states forming across the Alleghenies. The urban working class had been staggered by the Panic of 1819, the nation’s first big economic bust. The electorate was broadening as states dropped property requirements for voting, moving the nation close to universal white male suffrage. Literacy was spreading, and newspapers were multiplying.

Just a quarter-century after becoming the nation’s capital, Washington was already viewed as corrupt and out of touch. Jackson could promise to drain the swamp when the city wasn’t far from actually being one.

Jackson operatives — eventually headed by the canny New Yorker Martin Van Buren — set up campaign committees in cities across the nation that coordinated messaging and became the building blocks of the modern Democratic Party.

Newspapers were the websites and cable-news channels of the Jackson era. If there was no pro-Jackson paper in a town, the Jackson team would use campaign cash to found one. Powerful Jacksonite editors in big cities — including DC — could set the political agenda by publishing an article making useful claims of varying veracity, and then get it reprinted in similarly oriented broadsheets in towns and villages across the country.

The book’s writing is generally brisk and clear, sometimes delightfully insightful (a politician’s “popularity pleased but did not deceive him”) and often poetic (“the fragrance of blood” in political waters). Very occasionally, it falls into repetition or obscurity (“The Potomac was a Rubicon of sorts, as president and cabinet later discovered, but the republic had its citizens in need of the true story, per Andrew Jackson and properly related”).

Like Trump, Jackson was quick to object with wounded innocence to “unfair” treatment but seemed oblivious to his own trespasses. (Of course, Trump just gives his enemies nasty nicknames; Jackson often tried to kill them, sometimes successfully.)

Unlike Trump, Jackson actually raised himself up, served in the military, and held elective office before becoming president. He also seemed to grasp the reciprocal properties of loyalty and was the devoted husband of just one woman.

Perhaps the greatest distinction between the current commander-in-chief and Jackson, however, is that the latter usually listened when his advisors cautioned him to cool down and shut up. But, then again, Jackson didn’t have a Twitter account.

A scholarly work investigating not just the judiciary’s role but also society’s responsibility in the diminution of Fourth Amendment protections.