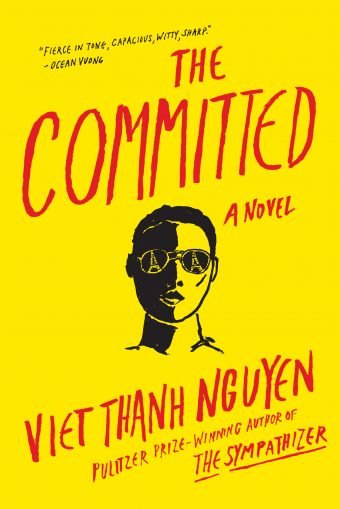 One of the most interesting aspects of Viet Thanh Nguyen’s The Committed, sequel to the Pulitzer Prize-winning The Sympathizer, is how much of a critique it is of three cultures: Vietnamese, American, and French. Shortly after arriving in Paris, the unnamed narrator of both novels observes how charming Paris is. However, that same word “was too moderate of an adjective for a country and a people as hot and hot-blooded as mine,” he observes. The Vietnamese “repulsed or seduced, but we never charmed.”

And America is certainly not charming, either. He likens American capitalism to Coca-Cola, which wasn’t good for you, “no matter how it fizzled on the tongue.” But everything about Paris was charming: the shape of the baguettes, the coffee served in tiny cups, the paint peeling on doors.

Commentary about capitalism, colonialism, and culture crowd the novel. Here’s another example: the American capitalist eats “gigantic slabs of still-bleeding red meat,” while the Frenchman “preferred the refined cruelty of foie gras.” These analyses are often both astute and entertaining, if at times simplistic.

The plot is very Tarantino-esque. The narrator — sometimes referred to as Crazy Bastard — who has escaped from a reeducation camp in Vietnam, initially stays with his aunt, who’s surrounded by intellectual friends. This period in his life turns out to be a short and pleasant interlude. But he quickly becomes involved in drug dealing, and the narrative hurtles from one wretched event to another.

One of the reasons I had trouble getting drawn into the story is that the narrator is largely unknowable. He wakes up with the “meaty taste of an existential crisis” in his mouth and brews coffee “that’s as black as the emptiness” within him, but his very intellectualism is a brick wall around his soul. The book doesn’t answer questions about who he truly is, notwithstanding explanations like this:

And it requires some suspension of disbelief to accept that a war survivor who has worked as a spy and been horrendously tortured is so immersed in literary theory and philosophy, even as he goes about dealing drugs or visiting brothels. In an interview, the author says that the narrator is in many ways an alter ego. And this isn’t surprising. The narrator’s personality, especially his penchant for philosophical rumination, seems to be much closer to a college professor’s (which Nguyen is) than to a war survivor’s.

Here’s how the narrator responds to a sentence uttered by his former professor: “‘Art is not a mirror held up to the world but a hammer with which to shape it.’ Oh! I had practically orgasmed at hearing this for the first time! Slogans were my turn-on and my political convictions were my most erogenous zone.”

And the other characters who walk into and out of this story are even more unknowable, even two-dimensional. While we do get to know the narrator’s friend Bon and his aunt a little, most of the others have paper-thin personalities. Still, there are stretches of the narrative that are compelling and race along at breakneck speed in the same way a gangster movie does. Drug deals go wrong, gangs go on revenge-killing sprees, and the narrator frequents a brothel.

Ultimately, if you belong to the slice of the population that’s into both violent thrillers and cultural analysis, this well-written book — with its various idiosyncrasies — will hit the spot. For others, it may be a bit of a struggle.

Who Are You, Calvin Bledsoe?: A Novel