A biographer makes clear his disdain for his subject. 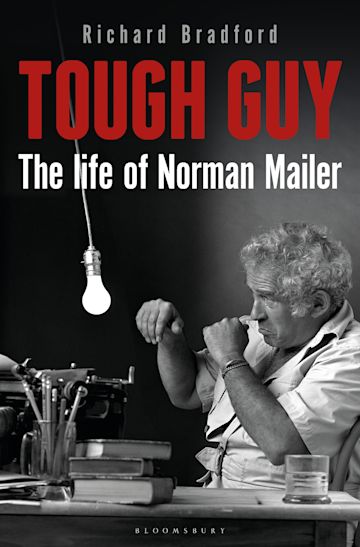 There’s not much to like or admire about Norman Mailer, according to Tough Guy, a new biography of the two-time Pulitzer winner by Richard Bradford, a professor of English and senior research fellow at Northern Ireland’s Ulster University. Mailer, Bradford tells us, had no redeeming personal qualities, and his novels were mostly too long, too dense, poorly constructed, and badly written.

Nonetheless, Mailer became an instant literary star with his 1948 debut novel of World War II, The Naked and the Dead, and went on to write and publish prolifically for more than half a century. Yet Mailer, says Bradford, was a poseur whose purported proletarian origins were rooted in his own image-making.

Hiding his ethnic origins, he changed his name from Nachem Malech Mailer to Norman Kingsley Mailer. He was also, we learn, a racist, a sexist, a homophobe, a bore, a compulsive philanderer, and a mean drunk always looking for a fight. A “serial fornicator,” Mailer married six times, fathered eight children, and nearly stabbed his second wife to death (which got him three years’ probation). He was “unconstrained by the norms of civilized society,” a man who always evaded responsibility for his actions. Remarkably, all but his first wife seemed to stand by their man regardless.

Mailer also hobnobbed with high society — or tried to — and with lowlifes like Roy Cohn. In some respects, he comes across as almost Trumpian.

Several Mailer biographies have preceded this one, and Bradford is critical of those more favorably disposed to their subject. So, the question arises, why yet another, and why now? Well, sometimes an author just needs a news peg, and 2023 happens to be the centennial of Mailer’s birth. Bradford’s is not the only volume to mark the occasion. Robert J. Begiebing’s Norman Mailer at 100, published in November, “celebrates the author’s centenary…by illustrating how Mailer remains a provocative presence in American letters.”

But if you buy what Bradford is selling, you must wonder why he remains such a “provocative presence” worthy of continued attention, and why the New York literary establishment so indulged him. To his credit, Ernest Hemingway at least never responded to Mailer’s letters. But because of his “brutish…outlandish behavior,” Bradford writes, “Mailer drew so much attention.” And still does.

Bradford goes into excruciating detail in dethroning the famed novelist. At times, the reader suffers from too much information. We are exposed even to Mailer’s very early sexual urges. There is something off-putting — voyeuristic — about this, and one wonders at its point. Is it to foreshadow Mailer’s philandering as a sex-addicted adult?

As Bradford demonstrates again and again, Mailer’s love life was intertwined with his writing, but on at least one occasion, the connection seems strained. For The Naked and the Dead, which made him an instant star, Mailer borrowed liberally from letters he wrote to Bea, his wartime bride, to whom he dedicated the novel. Bradford suggests this is a form of plagiarism, but was it really?

Some of Mailer’s works are doorstoppers. One wonders if anyone actually read all 1,300 pages of Harlot’s Ghost, ostensibly a spy novel, and why no editor cut it down. Then there is Ancient Evenings, a mere 709 pages of long paragraphs published in 1983. “It is astonishing that anyone found it publishable let alone readable,” Bradford asserts.

Writing introspectively in the third person in the introduction to the 50th-anniversary edition of The Naked and the Dead, Mailer admitted to some of the shortcomings Bradford notes. Of his first book, he wrote, “It has virtues, it has faults” but was “sloppily written in many parts” and was his “only prodigious best-seller.” In Tough Guy, Bradford makes no mention of this midlife confession.

One of his shortest books, for which he won his first Pulitzer, was The Armies of the Night: History as a Novel, the Novel as History, about the 1967 march on the Pentagon to protest the Vietnam War. In it, Mailer is both an observer and a participant. The book was hailed as a noteworthy example of “New Journalism,” which was then emerging as its own genre.

Mailer’s controversial career included a quixotic run for mayor of New York City in 1969; he came in fourth out of five candidates in the Democratic primary. Despite the defeat, his career continued to win him attention and awards, including a second Pulitzer, this time for The Executioner’s Song.

Undeniably, Mailer was prolific. His oeuvre includes 11 bestsellers, most of them long forgotten. But give the man his due — which Bradford does, albeit begrudgingly. Flouting convention, unconstrained, his personal and financial life a mess, Mailer kept at it, publishing his last novel in 2007, the year he died at 84.

Still, this is an odd biography with a few quirks, which may be due to its author being British. For example, Bradford’s use of “Democrat” as an adjective (“the Democrat campaign team”) instead of “Democratic” mirrors a Republican slur. And he frequently refers to Mailer’s brownstone in “Columbia Heights,” as if it were a neighborhood in New York City rather than a wealthy street bordering the Brooklyn Heights promenade that overlooks lower Manhattan.

The book contains a bibliography but no list of archives, papers, or periodicals, nor any persons interviewed. Instead, Bradford seems to have relied almost exclusively on secondary sources. There are no end notes or footnotes, either. Rather, sources are embedded in the text, as if waiting to be repositioned and expanded. The index, too, is curiously inadequate — and in a microscopic font that will challenge even the most perfect pair of eyes.

Still, in the end, Tough Guy adequately charts the controversies, the scandals, the successes, and the failures — in literature and in life — of its complicated subject, an author whose work has somehow come to be included in the canon of great 20th-century American writers.

Eugene L. Meyer, a member of the board of the Independent, is a journalist and author, among other books, of Hidden Maryland: In Search of America in Miniature and Five for Freedom: The African American Soldiers in John Brown’s Army. Meyer has been featured in the Biographers International Organization’s podcast series.