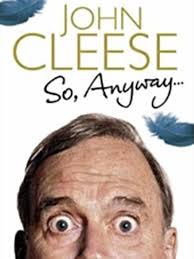 Reading John Cleese’s new autobiography is like sitting in a comfy chair in a cozy English flat, dozing off occasionally, wondering when the Monty Python bits will begin.

Sir, it’s a comedic sourcebook, a tutorial on audience psychology.

Hardly any Python, though.

I suppose it’s his bloody book and he can do whatever he wants with it.

So, Anyway, is it uproarious? No. Envelope-pushing? No.

Is it John Cleese confronting the best and worst bits of the 20th century, swinging London, cultural upheaval, and all that? No. A life-and-times sort of thing? No.

It’s the comfy-chair approach to the celebrity memoir of the early 21st century. And nobody expects the comfy chair. Python fans — who long ago memorized their favorite bits and are ready to recite them at will, soliciting knowing glances from fellow travelers (you know who you are) — will have to adapt. This is not a Python behind-the-scenes laugh riot.

A bit of advice. So, Anyway… is best read if Cleese’s distinctive voice and manner are installed in your head. And the reader must wind down, adapt to the gentle, village-green pace — that of a kindly, quirky British uncle, the one who tells you all about his happy childhood days, his halcyon days with the Cambridge Footlights theater troupe (“No, I don’t sing or dance...I try to make people laugh”), and his big break with David Frost and the invention of the mock television-news broadcast way back in 1961. Then working with Marty Feldman and Peter Sellers, and then lots about fellow Python Graham Chapman, Cleese’s closest friend. Good to know. I had no idea they were such a writing team.

Cleese begins with a bit of Dickensian I-am-bornness:

“My first memory, though, is not of Uphill but of a tree in the village Brent Knoll a few miles away, under whose shade I recall lying, while I looked through its branches to the bright blue sky above. The sunlight is catching the leaves at different angles, so that my eye flickers from one patch of colour to the next, the verdant foliage displaying a host of verdant hues. (I thought I would try to get ‘verdant,’ ‘hues’ and ‘foliage’ into this paragraph, as my English teachers always believed that they were signs of creative talent. Thought I probably shouldn’t have used ‘verdant’ twice.)”

Read that again with his verdant voice running. It helps. If you don’t know his voice, I’m surprised you’ve read this far.

We are escorted through his early life, his rather difficult mum, his kindly dad, his schools, his teachers. One teacher made a lasting impression — a Mr. Bartlett, a fastidious and gentlemanly anti-vulgarian who was frequently appalled. Cleese explains:

“I’m not referring to what in Britain in 2014 would be called vulgar: crude talk about bottoms and breasts and genitalia, cursing…what would he have made of our celebrity culture? This was the Edwardian gentleman’s approach to life: courtesy, grace, restraint, the careful avoidance of embarrassing others, non-intrusiveness, considerateness, kindness, modesty — nay, more than modesty, self-effacement…but the charm of it all was that there was humour and, indeed, a hint of playfulness about his constant state of ‘being appalled’, and he was not often deeply appalled, sometimes he was only slightly appalled, for example at our stupidity, of which there was a lot about.”

And that is what makes John Cleese tick, it is where his comedy comes from — a quiet confrontation with the English social straitjacket. From the film “A Fish Called Wanda,” written by Cleese, his character says, “Wanda, do you have any idea what it’s like being English? Being so correct all the time, being so stifled by this dread of doing the wrong thing?”

Here and elsewhere, Cleese discusses how the wrong thing can have uproarious results for the British middle class, a key comedic tool being the gap between intention and outcome. For example, the character Manuel, quite unintentionally, always wrecks Basil’s crazy plans in Cleese’s popular post-Python TV show, “Fawlty Towers.” Cleese says, “If there were any intent to hinder, the joke wouldn’t work.”

So, at heart, John Cleese is a student of comedy. A writer, not so much a performer.

And here, finally, bits of Python insiderness: “If you want to understand how the Python group operated, you need to grasp one essential fact; like Graham and I, Michael and Terry and Eric were primarily writers, not performers…one result of this was that we never wrote parts which were intended to showcase our talents, as actors would’ve done.”

If you’re a fan, and again, you know who you are — you ought to read this book. You’ll learn a thing or two and you’ll Google the obscure sketches and you’ll decide that Cleese is probably right about intention and outcome. And you’ll agree that everybody needs a comfy chair.

Barry Wightman’s novel Pepperland, a revolutionary, technology, rock-‘n’-roll love story, was published in 2013 and won a Silver IPPY for best fiction from the Independent Publishers Book Awards. Besides being fiction editor for the literary journal Hunger Mountain, he’s still trying to figure out the chords to old Kinks songs.

Respected physicist Roger Penrose theorizes on the beginning and end of our universe.