This stylish compendium would be right at home in the poetry section. 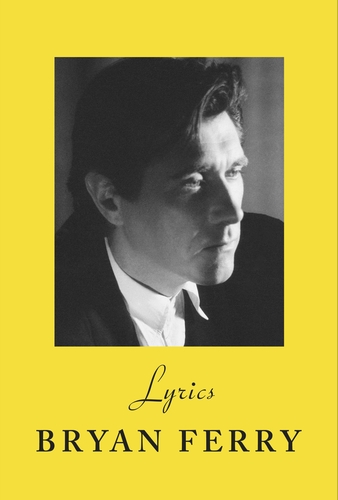 It must be tempting for musicians of a certain age, whether in search of fresh relevance or wanting a reflective look back at a long career, to gather their lyrics together and package them as a fancy hardback reintroduction to a body of work.

Enter Roxy Music lead singer/songwriter Bryan Ferry, the suave Cary Grant of rock ‘n’ roll. Less pseudo-scholarly than Paul McCartney’s recent The Lyrics: 1956 to the Present, and more serious than the surreal irreverence of Robyn Hitchcock’s Somewhere Apart: Selected Lyrics 1977-1997, Ferry, in the plain-titled Lyrics, has produced the kind of offering that might be expected from a debonair, sensitive soul who moves like a sleek cat onstage and croons with deft phrasing and intelligent words.

Lyrics is a slick, classy overview of Ferry’s work, beginning with Roxy’s iconic first album in 1972, up through his solo 2014 release, Avonmore. Featuring an insightful essay by writer and Roxy expert James Truman, plus a short introduction from Ferry himself, the collection otherwise eschews ephemera and focuses on the lyrics as standalone poetry. T.S. Eliot wouldn’t include wacky drawings (like the ones Hitchcock employs) in his collections, and neither does Ferry.

Eliot is worth mentioning here because Ferry cites him as an influence, noting that, from an early age, verse from Eliot, Sylvia Plath, and John Donne was “pinned to my bedroom wall.” No 1970s posters of Farrah Fawcett or the Fonz for young Ferry, who must’ve been one of the planet’s few genuinely cool teenagers.

Generally, the lyrics hold up even without the usually excellent music that accompanied them. For example, from “Mother of Pearl”: “Oh mother of pearl/lustrous lady of a sacred world, Thus; even Zarathustra/Another-time-loser, could believe in you.” Or this, from “Do the Strand,” where Ferry invents a dance craze: “The Sphinx and Mona Lisa/Lolita and Guernica, Did the Strand.”

This ain’t exactly “moon in June” or “me/see” formulaic songwriting rhymes, folks. At his best, Ferry is right up there with gifted lyricists like Cole Porter and Ira Gershwin, steeped in the old-fashioned tradition of well-crafted songs with surprise twists.

Lyrics as a work is also valuable because it draws attention to the songs’ words in a way Ferry’s breathy vocals sometimes cannot. As a singer, he’s more subtle than bombastic. Missing the power pipes of other performers, Ferry’s vocals are more evocative than overwhelming. It’s deceptively easy to enjoy a Roxy Music tune or a solo Ferry track without digesting the words. But Lyrics shines a spotlight on them, and many are worthy of the “poetry” label. One such example, from Ferry’s excellent 1985 solo record, Boys and Girls, is “Slave to Love,” which encapsulates his thinking-man’s tortured, romantic persona:

“Tell her I’ll be waiting/in the usual place, With the tired and weary/And there’s no escape, To need a woman/You’ve got to know, How the strong get weak/And the rich get poor.”

I don’t know how musical T.S. Eliot may or may not have been (the travesty of “Cats” aside), but had he been a bit cooler, he probably would’ve been proud to have written many of the Ferry songs featured here. I’d like to think in an alternate universe somewhere, there’s a moony teenage Eliot lying on his bed and looking at Bryan Ferry verses taped to his wall. As Lyrics demonstrates, Ferry deserves the respect accorded to any talented poet.

Michael Causey is the host of GET UP! on WOWD 94.3 FM Takoma Park, MD, and takomaradio.org. He hopes to be Bryan Ferry when he grows up.