The Unwritten Book: An Investigation

This unusual, challenging work will resonate with (some) readers. 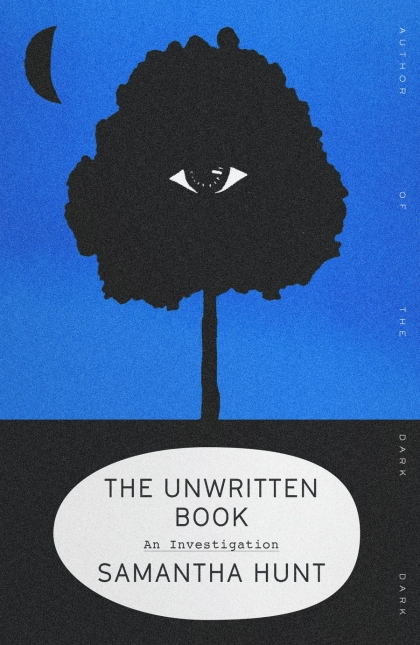 The Unwritten Book is about a lot of things, the least of which may be the chapters of an unfinished novel sprinkled randomly throughout its pages. It comes from the agile, inquisitive, and a-little-bit-crazy mind of Samantha Hunt. The book, and the book within the book, are vehicles for exploring the interrelationship of seemingly unrelated things and the juxtaposition of opposites.

If that sounds intriguing, The Unwritten Book will be for you like Goldilocks on her third try at the porridge: just right. Yet readers in this category will probably be in the minority. For many, this excursive narrative will be underwhelming, frustrating, or confusing.

However, Hunt’s work should not be dismissed lightly. She is an award-winning novelist, essayist, and teacher. Her fiction and nonfiction explore the intersections of magic and science, fear and joy, life and death. Death and ghosts, in fact, are central to her work.

“I carry each book I’ve ever read with me, just as I carry my dead — those things that aren’t really there, those things that shape everything I am,” she writes. In this case, the ghost is her deceased father, and the unwritten book is his incomplete manuscript.

Hunt mines her father’s death and his book for clues to an unspecified mystery. She gives us the three existing chapters of his manuscript, which take up about a third of her book, on the right-hand pages, with her comments on the left. The unfinished novel is a mildly amusing story of Cold War-style paranoia. In one comment, she acknowledges it might not interest today’s readers.

What interests Hunt, though, and what she hopes will interest us, are ideas, concepts, and things that lead to divergent paths from the same starting point:

Her touchpoints range from the boy band One Direction to the works of William Faulkner and Toni Morrison to hormones. One chapter is broken into sections with such disparate subtitles as “Haul,” “The Internet,” “Morphic Resonance,” and “Witches,” among others.

Hunt is especially fond of words whose origins differ from their current meaning or have different meanings in various contexts. For example, she notes that, according to Shipley’s Dictionary of Word Origins (to which she makes several references), “cardinal,” meaning a fixed and unchanging point, is derived from a Greek word meaning to hinge or to swing. It’s a word that grows out of its opposite. She later points out that “brood” as a noun means offspring, while its verb form means to ponder anxiously.

Transience and decay are recurrent themes here. Hunt’s mother’s house reminds the author that order is temporary. “The longer I live with books and words, the more I enjoy their erosion. I break them open. I make beaches.” But those beaches, too, will inevitably be washed away by the sea.

Interspersed with her musings are outlandish episodes. For example, Hunt goes to a medium to ask Charlotte Brontë to blurb her book. (She doesn’t really believe this is possible, but she tries anyway.) She eats half a donut found on the floor under a cabinet after her father’s death. She receives pulsed electromagnetic fields from a high-voltage Tesla coil machine for their possible health benefits.

Amid the jumble are gems, such as her comparison of covid-19 to David and Goliath: “a microscopically small virus trying to fight and sometimes kill the only species that actively, wantonly tries to destroy planet Earth, us.” She feels threatened by a heaven that grants us “permission to destroy the heaven we already have here.” And, after the death of a friend, she writes, “I understood how a dead friend could make the living feel more alive.”

So, does this all fit together? Yes. The essays are like chapters in a disjointed memoir, but everything is connected, and everyone is related. Hunt references Jose Luis Borges’ The Aleph, in which Borges defines aleph (the first letter in the Hebrew alphabet) as that which contains everything in the universe seen from every point of view simultaneously.

Like Borges, Hunt sees the connections between unrelated things and sees everything at once, from all viewpoints. She sees the holes and the connections — holes left by the dead, connections to the living. These connections and holes are the charm and the conundrum of this work. The writing is skillful. The result is, in the author’s own words, “the bellowing hush of empty space the moment after we finish reading a book.”

Readers must decide if that empty space is worth listening to.