Separate: The Story of Plessy v. Ferguson, and America’s Journey from Slavery to Segregation

The seeds of racial discord were sown long before the Civil War. 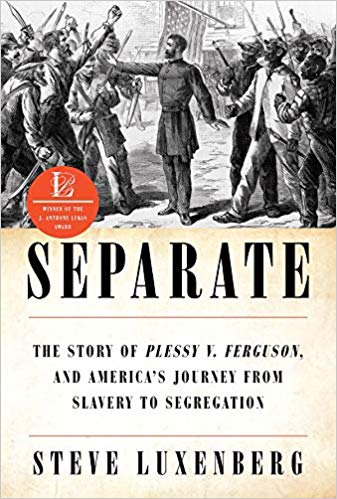 What does the average white person do in America’s racist landscape? Nothing, and they gain the benefit of it. And what emotion should this statement elicit from the average white American participating in their past, present, and future racist society? These are the questions asked in Steve Luxenberg’s prodigious new work, Separate: The Story of Plessy v. Ferguson, and America’s Journey from Slavery to Segregation.

Luxenberg’s narrative begins in the North, in Boston, where, in the 1840s, Jim Crow segregation developed on the newly burgeoning railroad lines, where white commuters preferred to travel without the offense of darker-skinned people among them, and the institutional structure of the developing industry accommodated such prejudice. Similar legal distinctions were unknown in the South because of, ironically, slavery. This is two decades before the Civil War and 50 misty years before the Supreme Court decided on the Plessy case.

For those intervening years, Luxenberg provides the biographies of four of the most important people who would be involved in the case: John Harlan, Henry Brown, Albion Tourgee, and Louis Martinet. The reader’s great honor and delight is to follow Luxenberg as he intertwines their stories from widely singular strands at the beginning, to their historical moments on stage together in 1896.

Each man was powerfully affected by the Civil War, and the defining theme in their lives was attending to the ramifications of racial animosity. Harlan and Brown developed from lawyers and politicians into judges, both taking seats on the U.S. Supreme Court by the early 1890s. Brown would write the shameful majority opinion for Plessy so that all human posterity would know his neglect of American ideals. Harlan, the only dissenting justice, would write the generally more positive minority opinion.

Tourgee’s education ended at the beginning of the Civil War, in which he served the Union Army for nearly two years, fighting even after he recovered from a severe wound in his back. He then spent 15 years in North Carolina, idealistically trying to make the Union “better than it was before.”

He neither made a fortune nor succeeded in improving life for African Americans in the South. But he did bring his many carpet-bagging stories together in a book called A Fool’s Errand. He also became a successful newspaper columnist and an activist for civil rights through the National Citizens Rights Association. His participation in the Plessy trial is the most unlikely of all.

Louis Martinet grew up in a mixed-race New Orleans family among a community which had limited involvement in slavery. An editor of a newspaper, the Daily Crusader, and a civil-rights activist, Martinet was part of the Comite des Citoyens, whose purpose was to strike down the Separate Car Law in Louisiana (1890). Turning back this one law would, hopefully, loosen the grip of whites who were, in defiance of the Fourteenth Amendment, tightening the legal shackles of segregation.

In explaining the lead-up to the Civil War, Luxenberg offers a clarifying analysis of the catalyzing effects of the Runaway Slave Act, particularly in the North. One scene, from Marshall, Michigan, has an extended family of African Americans (ironically named the Crosswhites) living at the edge of the white part of town. One day in 1847, some slave hunters arrived and surrounded the Crosswhite home, demanding to bring some of them back to slavery. A crowd of people gathered.

Some of the more high-minded neighbors of Marshall, alarmed by the civil disturbance, “arrived in mid-standoff…[and] tried to persuade the slave hunters to abandon their mission.” Shortly thereafter, the crowd chased the slave hunters away, and “in Kentucky, [this case] became a synonym for the North’s trampling of Southern rights.”

As sentimentally interesting as the scene in Michigan is, Brown, who hailed from Marshall, was one of the seven Supreme Court justices who, while agreeing that political rights were necessary for all, also insisted that social equality between races was beyond the court’s jurisdiction. Plessy v. Ferguson is a microcosm of this 19th-century idea, which somehow still pervades in 21st-century America.

Even in the North, social equality was impossible because of the prejudice that white people instilled in the institutions they created to rule themselves. They intended to exclude, so when technology brought convenience and comfort to interstate travel, blacks could have facilities that were “separate but equal.” Doesn’t that sound so much like 3/5 of a person? Or that no negro could ever be a citizen? Or the destruction of Reconstruction through Civil Rights cases?

We are here again today. In voter suppression, in gerrymandering, in the imbalanced representation of the Senate and the Electoral College, U.S. history is repeating itself. With this monumental work, Luxenberg shows us precisely how — through the workings of malleable law. He also signifies what a shame it was that the white people of the United States put the entire weight of social equality and civil rights in the 19th century (and most of the 20th) upon the humble shoulders of Albion Tourgee, that his noble efforts have been so lost to history, and that we still haven't completed his work.

Y.S. Fing is a composition lecturer at a local university and a literary gadfly in the DC area. He belongs to the Washington Biographer’s Group, and is a committee member of the Washington Writers Conference. Recently, he has been experimenting with short essay form in Fingism and Finglish.