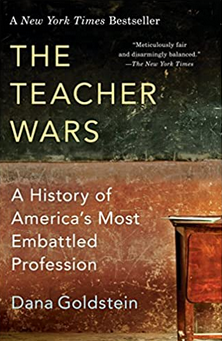 For anyone who’s been following current debates over education reform, Dana Goldstein’s history of such efforts will give new meaning to the biblical pronouncement that there is nothing new under the sun.

Complaints about class size? Check, going back at least as far as 1875, when Harvard president Charles William Eliot called for more spending on education because classes were too large. Of course, in those days, they might contain as many as 60 students, a situation that persisted well into the 20th century. In 1962, a landmark strike by New York City teachers succeeded in reducing the maximum high-school class size to 49.

Teach for America? One 19th-century reformer, Catherine Beecher, urged young women to go west to teach unlettered frontier children. In the 1960s, a teacher at D.C.‘s Cardozo High School envisioned an army of Peace Corps veterans interning at struggling inner-city schools. That project became the National Teacher Corps, a federal program that lasted from 1965 to 1981.

Even the apparently modern idea that you can measure the “value added” by a teacher has an echo in the past. In the 1920s, one education researcher proposed that administrators give each teacher a “pupil change” score, which would measure the difference between how much the teacher’s students knew at the beginning of a term and at the end.

Such plus ça change, plus c’est la même chose examples could be multiplied. But the most revealing aspect of Goldstein’s well-told account has to do with the divergence between the United States and Europe in recruiting and training teachers.

Almost from the beginning, teaching in this country has been a profession for women; today, only 24 percent of teachers are male. And many schools of education have low admission standards, producing graduates who lack expertise in subject matter and practical classroom skills.

Goldstein argues that these two characteristics of the American teaching force — its feminization and its lack of prestige — are linked. Reformers like Catherine Beecher and Horace Mann promoted teaching as a suitable career for women in the 19th century, portraying it, in Goldstein’s words, as “mothering outside the home.” Inculcating character and values were to be more important than imparting academic knowledge.

Not only were women supposedly better suited temperamentally to such a vocation, they were also — as Beecher explicitly argued — relatively cheap, since it was assumed they didn’t need to support a family. That led to the low salaries that have made it hard to draw men — as well as highly educated women, once other career paths were open to them — into the profession.

Meanwhile, in countries such as Germany and France, the teaching force remained about 50 percent male, the pay was higher, and the training more rigorous. In the United States, teacher-training institutions called “normal schools” often enrolled young girls straight out of primary school and gave them minimal preparation. As those schools evolved into state colleges in the mid-20th century, their standards remained low. Many of them continue to train and certify teachers.

When a Reagan-era federal commission produced “A Nation at Risk,” the report that sparked the current education-reform movement, it chose not to recommend the kind of lengthy teacher-training period that European and, by that time, some Asian nations required. Instead, the report suggested alternative certification programs that would allow young college graduates and career-changers to enter the profession quickly.

One indirect result of that recommendation was the creation of Teach for America (TFA). While TFA has accomplished a great deal by sending bright young college graduates into underserved schools, Goldstein makes clear that its founder, Wendy Kopp, was wary of fostering the idea that teaching was something you could do with just a few weeks’ training.

Kopp’s original idea was to send TFA members into only those schools where there was a shortage of experienced teachers. She didn’t claim then, as the organization does now, that TFA-ers would perform as well as or better than veterans. But even TFA has come around to the idea that its recruits would be more effective if they got more extensive training, and it has launched a new program designed to provide just that.

Goldstein’s narrative is both engaging and illuminating, and it’s generally free of dogma or partisan rhetoric — a refreshing trait in the polarized world of education reform. Yes, Goldstein sides with teachers’ unions in cautioning against linking test scores to teacher evaluations. (“The hope that collecting more test scores will raise student achievement,” she says in one memorable phrase, “is like the hope that buying a scale will result in losing weight.”) But she’s also in favor of ending “outdated union protections,” like the policy of laying off recently hired teachers first, regardless of competency.

Goldstein ends with a series of explicit “lessons from history.” While many make sense, they’re largely familiar and lack the power of her historical account. But her final lesson points out another difference between the United States and other countries: our relatively decentralized education system.

The federal government can dangle incentives, as it has done with Race to the Top, an Obama-administration program that promises states and school districts money in exchange for adopting reforms like tying teacher evaluations to test scores. But it lacks the power to ensure that those reforms are implemented sensibly.

Goldstein’s answer to that problem is to build on the expertise of our best teachers, so that reforms are “seeded from the ground up, not imposed from the top down.” True, many policy-makers are far removed from the classroom, and teachers’ ideas need to get a better hearing. But, as Goldstein’s account makes clear, if we’re going to rely on teachers to come up with great ideas, we also need to make teaching a profession that will attract and retain great thinkers.

Natalie Wexler blogs about education at Greater Greater Washington. She is the author of three novels, including the recently published historical novel The Observer, based on the experiences of the first woman to edit a magazine in the United States.