The Tattooist of Auschwitz: A Novel

An improbable (but mostly true) tale of love in a Nazi death camp. 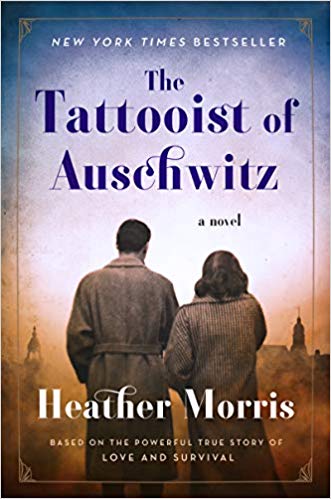 In an interview with the Jewish Chronicle, Australian screenwriter Heather Morris recalled: “In December 2003, over a coffee with a friend, I learned about a man living in Melbourne, whose wife had recently died, and who just might have a story worth telling.”

That man was Lale Sokolov, upon whose story Morris based her bestselling debut novel, The Tattooist of Auschwitz, now available in the United States.

Morris’ telling of Sokolov’s story encountered obstacles: She drafted a screenplay first, but after four years, a local film production company couldn’t advance it. So she entered it in various competitions, receiving enough acclaim that she decided to reshape it as a novel. After a successful Kickstarter campaign caught the attention of a local publishing house, the rest, as they say, was history.

But there were other hurdles not as easily resolved.

The Tattooist of Auschwitz is the improbable love story of Sokolov and his wife, Gita, who met as prisoners at the infamous concentration camp on the day that Sokolov, chief tattooist at the camp, inked Gita’s arm with her identification number. A love story beginning with an act Sokolov himself calls “defiling” presented Morris with an immediate challenge, but so did Sokolov’s overall role in the camp, which haunted him still. As Morris relates in her author’s note:

“It took time before he was willing to embark on the deep self-scrutiny that parts of his story required…our lives became entwined as he shed the burden of guilt he had carried for more than fifty years, the fear that he and Gita might be seen as Nazi collaborators.”

Even today, hard questions arise about those perceived to have cooperated with their captors, questions echoed in a conversation the fictionalized Sokolov has with Pepan, the camp’s original tattooist, who saves Sokolov’s life and asks him to become his assistant:

“‘You want me to tattoo other men?’
“‘Someone has to do it.’
“‘I don’t think I could do that. Scar someone, hurt someone — it does hurt, you know.’
"Pepan pulls back his sleeve to reveal his own number. ‘It hurts like hell. If you don’t take the job, someone will who has less soul than you do, and he will hurt these people more.’”

Sokolov accepts Pepan’s request, though it takes him to “a dark place.” But as Morris reveals in dozens of unflinching, deeply moving scenes, it is in that place Sokolov’s soul shines brightest.

From his reluctant start, Sokolov uses the meager benefits of his new role not to bolster his own chances for survival, which he could have, but to attend to others — sharing his extra rations with fellow prisoners instead of keeping them for himself; saving “one man from hard labor, at least,” by requesting him as an assistant.

As the camp expands and fills and Sokolov is asked to tattoo women and girls, he recoils, but Pepan reminds him that “he either follows the rules or risks death.” It is one of dozens of moments Morris includes that reminds the reader that the “normal” rules outside of the camps do not apply inside; as Gita tells Sokolov later in the book, “Outside doesn’t exist anymore. There’s only here.”

When Sokolov tattoos Gita’s arm, his life, whatever it may turn out to be, changes forever: “Her eyes, however, dance before him. As he looks into them, his heart seems simultaneously to stop and to begin beating for the first time, pounding, almost threatening to burst out of his chest.”

Until this moment, Morris makes clear, Sokolov has considered himself a survivor, concentrating only on the “how” of his existence. Now, in Gita, he understands the “why.”

Sokolov turns from perpetrating safer acts of quiet defiance to creating a thriving black market: He convinces the young women sorting inmates’ stolen and discarded possessions to pass some of the valuables to him. He gives these to civilian locals who, in turn, provide him with sausages, chocolates, and medicine, which he shares with others in greater need, but always with the end goal of keeping Gita safe.

The horrors build as the months pass, and Sokolov trades more and more on his privileged status to try to keep Gita alive, even as he continues to work to save those around him:

“‘I have never forgotten your kindness,’ Jakub says. ‘I was sure I would die of starvation the night I arrived here, and there you were to feed me.’”

Jakub, too, does what he must to survive, but when he is ordered to torture his fellow prisoner for information about the black market, his actions that day save Sokolov’s life in return.

It’s difficult to imagine, let alone hope, that a love story begun in such a place could have a happy ending. But by alternating the abject horror and brutality of the camps — even as much as readers may think they’ve heard the worst of it, these scenes still shock — with Sokolov and Gita’s achingly tender love story, Morris reminds the reader that humans are capable not only of great evil, but also great love. That is, indeed, a story worth telling.

The Sixteenth of June