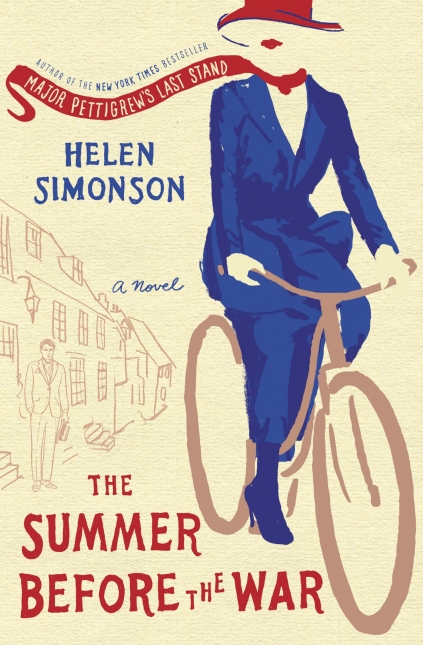 If you’re mourning the end of “Downton Abbey” as I am, it’s time for the witty and wise The Summer Before the War by Helen Simonson. This sophomore novel from the author of the bestselling Major Pettigrew’s Last Stand brings us back to the moment before the world changed forever — before the onset of the First World War in 1914 — in the country town of Rye near the high Sussex bluffs.

This is a story of English boys becoming men, most notably the brilliant medical student Hugh Grange and his artistic cousin Daniel Bookham, and the women who nudge them on. As Hugh reflects on his childhood in the opening pages: “Small boys, he now knew, were inveterate fraudsters and begged, pleaded, and cajoled for added rights and treats with innocent eyes and black hearts.”

The female characters, most notably newcomer to town Beatrice Nash, hired by the more progressive elements of the local school board to teach schoolboys Latin, prod the male characters forward not toward war (though that looms over the novel), but toward adulthood and reckoning.

Beatrice is too young, attractive, and intelligent (she even has literary aspirations) for some to believe her a proper teacher. Upon meeting Beatrice at the train station, Hugh muses that his Aunt Agatha, one of the town’s leading matrons, would have preferred that Beatrice were much plainer. It’s a wonderful bit of Austen-inspired romance to watch as Beatrice and Hugh sort out for whom they are each truly best-suited in life.

However, one must read closely to follow all the weaving and bobbing of the many major and minor characters who show up in Rye. In this expansive novel, folks meander into the marshes or bluffs or to London and wander back after several pages. Much tea is served.

At one point, Bohemian denizens with the terrifically English names of Algernon Frith and Amberleigh de Witte appear on the outskirts of town. Amberleigh holds a woman’s salon, which Beatrice attends, and tea is poured along with champagne. There is a hint of decadence, though on the whole, all stays very proper, insular, and disconnected from the conflict in the rest of Europe. Ultimately, that seems like the very point of this side trip to de Witte’s cottage.

However, the impending conflict between this island-nation and Germany is brought home to Rye when the town takes in several Belgian refugees — including the beautiful Celeste, with a story-turning secret — who suffered at the hands of German soldiers.

One must note that The Summer Before the War as a title is not exactly accurate. The war begins about two-thirds of the way through the novel, and the entire town, but particularly the military-aged Hugh and Daniel, is swept up into it. Lives are lost. Love is found. The world changes violently, but somehow the essential goodness of the characters in this wonderfully old-fashioned novel carry on.

Caroline Bock is author of the critically acclaimed young-adult novels Before My Eyes and LIE, both from St. Martin’s Press. Her poetry has been nominated for a 2016 Pushcart Literary Prize, and her short story “Gargoyles and Stars” is the 2016 winner of the Writer’s Magazine short-story contest judged by Colum McCann.

Vango: Between Sky and Earth

This whirlwind of a YA tale takes readers around the globe.

Sorry For Your Trouble: Stories