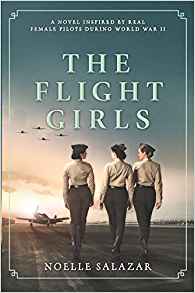 On a Hawaiian beach in October 1941, a chaste 22-year-old trainer of military pilots meets the unsettling gaze of her commanding officer. The vibe is “Nancy Drew + Top Gun.” As if to dispel any doubt about the nature of the ensuing story in The Flight Girls, the love interest is named Lieutenant Hart.

The novel’s protagonist, Audrey Fitzgerald Coltrane, name-checks one too many 20th-century artistic luminaries. During their first dinner together, she informs James Hart that her middle name resulted from her father being a fan of F. Scott. (The trouble being that the character was born the year before Fitzgerald’s debut was published.)

Through a series of accidental encounters against the ever-approaching menace of war, the pair develop feelings for each other, which they unconvincingly deny to themselves. After the attack on Pearl Harbor, he gets deployed to the European Theater, and she joins the Women Airforce Service Pilots (WASPs). Separation, trauma, and the passage of time only deepen their sentiments.

Despite the display of various period details, readers unfamiliar with 1940s America will learn little more than that handwritten letters served as the primary means of long-distance communication, and social dancing was far more prevalent than it is today. They may also develop the impression that coincidence, or stalking, served as the indispensable driver of romantic pursuits.

As with the protagonist’s True Love, the False Temptation (also an officer above her in the chain of command) advances his cause by happening to bump into Audrey on multiple occasions. Throughout the story, she can hardly leave her quarters without a suitor materializing at her elbow.

WASP training and missions occupy the longest portion of the novel, but the narrative delivers something like an executive summary of the program, noting the courses the female pilots studied (navigation, mathematics, etc.) and the tasks they performed (testing and ferrying aircraft).

Dangers and casualties flare up, but this is not a story about flying, the challenges of mastering new equipment, or what it feels like to take a military craft into the sky to ensure its airworthiness for male combat pilots.

Nor is it a story about a person, or a society, facing uncomfortable truths or struggling with moral choices. Instead, only a couple of early mentions of “Nazi bastards” and whether the U.S. should get involved in WWII, and a chance flight over a Japanese-American internment camp, provide occasions for the protagonist to express well-meaning views that would be widely accepted today.

Audrey “believed that as a country we should rise up and wield our power for the good of those being tormented and killed,” and she “found the decision to imprison thousands of innocents to be no better than what Hitler was doing on the other side of the world.”

That is about the extent of any focus on the events and attitudes of the time. In the world of this novel, never an angry word, much less an ethnic slur, is expressed against the Japanese by the nearly all-white cast. In a similar vein, the narrative is perfectly blind to racial segregation in the military or anywhere else.

Vanilla wholesomeness prevails, apart from the eyebrow-raising emotional overlap between Audrey’s lover and her handsome, smart, supportive father: “Until James, I’d never loved any man as much as I loved my dad.” They both call her “little bird.” And — raise the other eyebrow — she reminds Hart of his mother.

As for the broader portrayal of gender relations: Even the disdain and sexual harassment the female pilots face, covered in a couple of brief sketches, serve mainly to underscore their gumption. The toll such adversity takes remains unexplored.

The book abounds with love and tender admiration for the women pilots. Well-deserved, no doubt, but a novel-as-eulogy does little to dramatize lives and exploits. The women’s frustration at their subordinate status surfaces, but this is peripheral to the primary story.

Inner conflict is whitewashed, most glaringly when the virtually flawless Audrey, after risking her life to save her heartthrob in a we’ll-take-your-word-for-it aerial manuever, experiences not a whiff of resentment when he fails to acknowledge her action, let alone thank her.

And, yet, the story flows along agreeably and with pace. It is welcoming and immersive, even for nitpickers who notice timeline glitches and misfired words (e.g., planes “jettisoning” across the skies). As a standard-issue coming-of-age romance, The Flight Girls soars to its destination and delivers its payload directly onto the target. Mission accomplished for fans of the genre.

But readers drawn by the title, the Eleanor Roosevelt epigraph, and the proclamation “A novel inspired by real female pilots during World War II” may expect a different type of story. Honest marketing would replace those warplanes on the cover with a strapping airman — his flight suit fully zipped, given that the steam setting is on low.

Enjoy this tale for what it is. Isn’t that the essence of love?

Tom Navratil served as a U.S. diplomat in Moscow, Santo Domingo, Skopje, and Tokyo. He lives near Washington, DC, and is working on a novel.

The Forgers: A Novel

This whodunit has a clever premise, but that might not be enough.