In this fun beach read, a jilted housewife goes on a madcap journey to win a Palm Springs pageant. 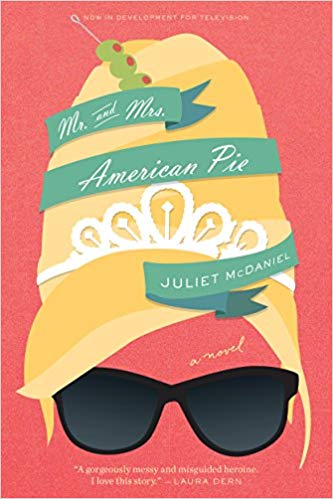 Thanksgiving 1969, and Mrs. Maxine Hortence Simmons is about to make her move for world domination. Well, not world domination exactly, but to topple ultra-bitchy Mrs. Evelyn Rollins to become the top doyenne of the cream of Palm Springs country-club society.

She’s just redone her dining room with the help of Evelyn’s favorite interior decorator, and is throwing a catered dinner to which she’s managed to get a couple of genuine Hearsts to attend, thanks to Evelyn’s connections and her own ruthless scheming.

But her grand plans are foiled when her airline-executive husband, Douglas, announces he’s leaving her for his 20-year-old pregnant secretary, which causes Maxine to drink and pill-pop a tad more than usual, resulting in an inebriated tantrum that ends with her floating in the swimming pool, cradling the Thanksgiving turkey.

“How the fuck did I end up a swamp monster in the pool with my gorgeous turkey?” she wonders. But the reader doesn’t. It’s all too obvious that her mean-girl social climbing has led to her downfall. What isn’t clear is whether she will reform her duplicitous ways after her spectacular public humiliation.

In what must be the quickest divorce ever, Maxine soon finds herself in Scottsdale, Arizona, living in a condo that, along with $250,000, is all she gets out of her divorce. Never one to settle for what she’s been given, she also makes off with Douglas’ E-type Jaguar.

Enter Robert Hogarth, a closeted gay tavern owner, and Charles and Dawn Bronski, the neglected children of a barmaid, who Maxine quickly makes into her posse, charming them with her brash outrageousness and occasional kindhearted gestures. A former Miss San Bernardino, when she hears about a beauty pageant for married women that crowns “the nation’s best wife and mother,” she hatches a plan to enter.

And, of course, win.

The plot hums along as Maxine and Robert get married right after he is picked up in a raid at a gay bar, and they head for Palm Springs to enter the pageant with Charles and Dawn — whose mother has conveniently abandoned them to join her minor-league-baseball-playing boyfriend on the road — posing as their children.

It turns out that ex-husband Douglas is a judge in the pageant, which only makes Maxine more determined than ever to snag that crown, if only she can get her ersatz family, and herself, to behave.

McDaniel has an insatiable eye for detail and is very good at capturing early 1970s period details, like avocado-toned appliances, mirrored walls, and busy wallpaper. Her writing is laugh-out-loud funny at times, which is no easy feat. How many books make you snort? This one did.

The story is narrated by scheming, vain Maxine; gentle-hearted, conflicted Robert; and precocious 12-year-old Charles. Each voice is distinctive and deftly conveys the personality of the character.

However, sometimes Maxine’s voice veers into the anachronistic, making liberal use of idioms and attitudes from the 21st century, not the groovy, far-out 1970s. She swears very inventively for a social-climbing housewife, uses words such as nanosecond and shit-show, and thinks things like, “But I keep my mouth shut, because decorum!”

Also, while the book is an entertaining read, there is just too much of it. A more prudent editor would have taken out the passages that do not keep up the forward momentum of the plot — such as visits Maxine makes to a local church to hone her acting skills by confessing made-up sins — and whittled down the overload of details that crowd each madcap escapade.

Still, due to its pert and adroit prose and action-packed plot, Juliet McDaniel's Mr. and Mrs. American Pie is a fun, breezy book that keeps the reader chuckling right up to its happy ending.