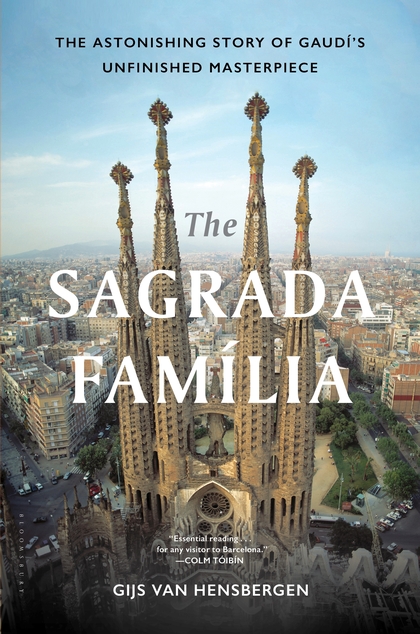 Visitors to the Sagrada Família, the spectacular basilica in Barcelona designed by Antoni Gaudí, are often overwhelmed by its grandeur and complexity, but the work is not simply an architectural tour de force. It is the product of Gaudí’s profound faith and love of nature, in whose myriad shapes, textures, and colors the architect found inspiration.

The two outer façades are positioned to invite in passersby. The power of the Sagrada Família to attract people of all backgrounds and religions coincides with Pope Francis’ efforts to reach out to Christians and non-Christians, believers and non-believers, to engage them in meaningful dialogue.

A brilliant mathematician knowledgeable about engineering, natural science, religion, and history, Gaudí sought to create a sacred space conducive to meditation and prayer. He calculated every angle, experimenting to determine how viewers at street level would perceive images placed high above ground.

“Gaudí was a devil for detail, trusting above all empirical evidence, especially when dressed up with beauty,” writes Hensbergen. But his objective was to inspire devotion.

“As with all of Gaudí’s work, the surface disguises a deeper reality. The temple’s engineering and cohesion of the intricate and interlocking structure is a perfect metaphor for a profound reflection on the complex Catholic liturgy and the structure of the Christian year. Contemplation of this complex edifice would slowly reveal, Gaudí hoped, a pathway toward a deeper spiritual truth.”

When Catalan bookseller Josep Maria Bocabella returned from a visit to the Vatican in 1872, he was determined to construct a magnificent church dedicated to Saint Joseph in Barcelona. Founder of the Spiritual Association of Devotees of Saint Joseph, Bocabella raised money and hired the architect Francisco de Paula del Villar to draw up plans.

The first stone was laid on Saint Joseph’s feast day, March 19, 1882. Del Villar and Bocabella soon clashed, and the following year, Gaudí took over the project. Although Gaudí designed other buildings in the interim, the Sagrada Família consumed him until his death in a tram accident in 1926.

The project faced many serious challenges. Catalonia had been a seat of violent anarchism since the 19th century. In 1909, a labor strike led to civil disobedience and anti-clerical rioting. Known as the Semana Trágica, the unrest led to the destruction of many monasteries and churches. Graves were defiled and nuns’ corpses paraded down the street. The Sagrada Família was left unharmed, but the views of Gaudí, who had always favored the working class, began to shift.

After the devastation of World War I, many intellectuals questioned the value of Gaudí’s “tasteless” creations, which they deemed retrograde. As Europe moved toward modernity, artists developed new styles, finding inspiration in industry and using materials such as steel, glass, and plastic.

However, explains Hensbergen, Gaudí was never wedded to any particular style. He drew from popular belief as well as nature, biblical sources, and modern engineering. “The question is not one of taste, good or bad. Gaudí’s genius lay…in his capacity to marry the most genuine and revolutionary invention with the simplicity and naïveté of popular art.”

Some of the most interesting chapters of Hensbergen’s book deal with the decades after Gaudí’s death. Domènec Sugrañes i Gras, one of Gaudí’s loyal assistants, took over direction of the project. Hensbergen notes: “Gaudí had struggled hard to arrive at the perfect synthesis of science, the decorative arts and architecture, interwoven with Catholic liturgy, the history of the Catalan Church and the mystical geometry of the heavenly spheres.” Sugrañes pondered the master’s words and notes to establish a guiding rationale.

With the outbreak of the Spanish Civil War, Sugrañes was caught between horror of the red terror and Franco’s brutality. On July 20, 1936, anarchists attacked the Sagrada Família. “Within hours, more than fifty years of work went up in smoke as Gaudí’s drawings, correspondence and photographic archive were put to the flames. Thousands of man hours dedicated to complex calculations, as Gaudí patiently developed his modular structure for the Sagrada Família.”

Looters overran the entire structure, stealing and destroying, even smashing the stone lid to Gaudí’s tomb. The anarchists “wanted to strip away every vestige of the sacred.” Twelve people associated with the Sagrada Família were murdered. It was a blessing that Gaudí was not alive to witness the destruction, writes Hensbergen.

After World War II, efforts to revive construction intensified with the support of General Franco. Over the years, new architects and artists joined the team, each adding his own particular interpretation of Gaudí’s vision.

The Japanese sculptor Etsuro Sotoo greatly enriched the project, not by recreating Gaudí’s design, but by capturing Gaudí’s spirit in his own work. In 1979, the New Zealander Mark Burry brought Computer Assisted Design (CAD) into the project. By integrating new technology, the team was able to advance much more rapidly. In 2005, the Sagrada Família was declared a World Heritage Site, ensuring work would progress uninterrupted. There is now a movement underway to canonize Gaudí.

Still, there have been setbacks. One was a controversy about an underground tunnel for high-speed trains from France to Barcelona, which engineers feared would damage the foundation of the church.

In spite of their concerns, the tunnel opened in 2013. Hensbergen notes that the Sagrada Família probably will not be complete by the projected date of 2026, the centennial of Gaudí’s death, but Gaudí probably wouldn’t be upset. “After all,” he used to say, “my patron is not in a hurry.”

Gijs van Hensbergen has written a spellbinding account of Gaudí’s unfinished masterpiece, one that every traveler to Barcelona would benefit from reading. My only regret is that he didn’t include photos.