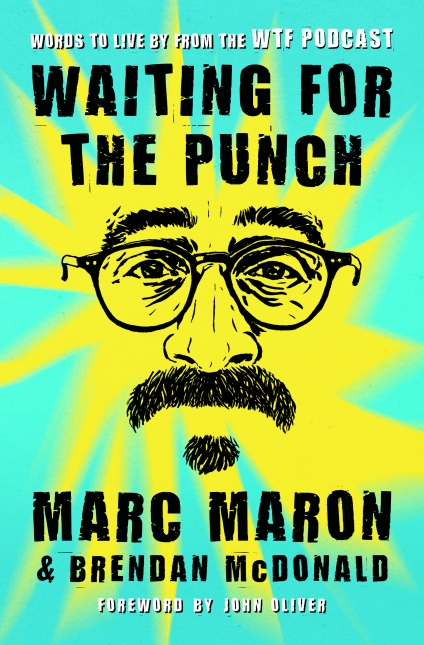 Full disclosure: Before this heartfelt, scatterbrained book landed in my lap, I’d never heard of Marc Maron. According to the bio on this collection of podcast interviews, Waiting for the Punch, he’s a “stand-up comedian, actor, author and host of the WTF podcast,” which my iPhone tells me is currently number 59 on the podcast charts. Maron is just ahead of “Anna Faris Is Unqualified” and “Your Mom’s House with Christina P and Tom Segura.”

Whoa…I had no idea.

But I remedied the situation. Quickly, I flipped through the “WTF” catalog (is that what they’re called, catalogs?) of past shows — jeez, there’s a lot of ‘em; what’s the matter with me? — and found a couple that were up my alley: a long interview with Bruce Springsteen and a chat with Randy Newman.

I was about to leave on a long road trip, so the timing was perfect. I fired up the trusty Subaru and headed to Vermont.

Long story short, Maron ain’t no Dick Cavett. Rough around the edges, nasally voiced, sort of charming in a guy-on-the-next-barstool kind of way, he interrupts Springsteen. He’s an agog fanboy, hey-I’m-from-Jersey-too!, agreeing with the Boss on just about everything — yes, right, right, oh yeah, what was it like to…on and on and on for an hour and a half.

Same with Randy Newman. Rather listen to his records.

It was a long trip to Vermont.

But here’s the thing: Maron got those guys talking. And that’s the point of a podcast. As comedian John Oliver says in his foreword, “He uses his honesty like a scalpel, cutting himself open in front of anyone he’s talking to, and in doing so, invites you to do the same.”

And they do. Folks talk. And talk.

Here’s another thing — Waiting for the Punch is almost 400 pages of snippets of past interviews — comedians, musicians, actors, comedians, TV hosts, and comedians — 60 or 70 percent of whom I’d never heard of. Your mileage may vary, but I wanted to throw the book across the room.

But then I thought better of it, retrieved the book, and did the right thing. I dipped in and out, leafing through it, finding somebody or something I cared about. Oh, look, here’s Ian McKellen, Carl Reiner, Patrick Stewart, Mel Brooks, and…Barack Obama. Yes, I know, Obama isn’t a comedian, but he made the cut. I read those bits.

That’s how you should read this book.

Organized into sections that reflect the culture of our self-centered times — Growing Up, Sexuality, Identity, Relationships, Parenting, Success, Failure, Mental Health, Mortality, and Life Lessons — Waiting for the Punch is edited like a movie trailer.

Super-quick cuts; a little bit of her saying this, of him goofing on that; banality; and the inevitable punchlines are the money shots of the podcast, little potted 21st-century epiphanies we can wrap up and take home.

Maron introduces each section of the book, getting us into the mood. Here’s a bit from his intro to Mental Health:

“It seems there are people who talk about mental health and there are people who really don’t talk about it at all. I’m a talker. Or at least I was. I’m not as much as I used to be, which I can only see as an indication that I am getting better…look, I’m still pretty fucked up but I’m not as dangerous to myself or others…sometimes you just have to be okay with who you are.”

But then Norm MacDonald, Jenny Slate, Chelsea Peretti, Whitney Cummings, and Dave Attell really get into the subject. Here’s how Aubrey Plaza listens to her hair: “I do a loop and then I scrunch it inside of my ear. I’m usually freaking out when I do that. My therapist said it’s a soothing thing, a defense mechanism.”

Thankfully, there’s Michael Keaton talking about coming up with his Beetlejuice character. And Mel Brooks riffing on Blazing Saddles — nothing earth-shaking or deep, just entertaining. Did I read that somewhere else years ago? I dunno. Doesn’t matter.

But then, way out on page 386, the last bit of the book, President Obama wraps it up:

“The more you do something, you lose fear. I was talking to somebody the other day about why I actually think I’m a better president and would be a better candidate if I were running again than I ever have been. It’s sort of like an athlete, you might slow down a little bit, you might not jump as high as you used to, but I know what I’m doing and I’m fearless. You’re not pretending to be fearless...it almost compensates for the fact that I can’t play basketball anymore.”

Makes Waiting for the Punch almost worth it.

I threw it across the room again.

Barry Wightman’s first novel, Pepperland, a revolutionary, technology, rock ‘n’ roll love story, was published in 2013, received a starred review on Booklist and won a Silver IPPY for best fiction from the Independent Publishers Book Awards. He has an MFA from the Vermont College of Fine Arts in Montpelier, VT, and is past fiction editor of Hunger Mountain, a journal of the arts. He also offers professional literary and editing services.