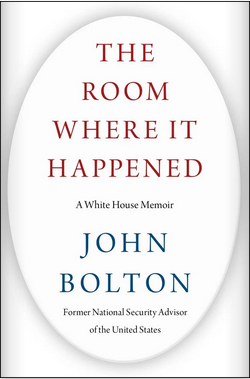 A little sympathy for John Bolton, please. The odor of skunk clings to him, and it’s possible that only the milk bath of history will be curative.

Democrats call the former national security advisor to President Donald Trump a traitor because he didn’t testify during the impeachment hearings, although his underlings did. His tell-all book and its $2 million advance offend them.

Republicans, and especially Trump-leaning Republicans, label Bolton a turncoat. Before his time in the White House, and certainly during it, man and mustache frequently appeared on Fox News. Now, his tell-all book and its $2 million advance offend them.

Future historians are going to canonize the man.

In The Room Where It Happened, Bolton lays before us in near-stifling detail some 17 months of life in the Trump White House. The policy disputes, the infighting, the president who can’t be briefed on world events because he already knows everything.

Descriptions of the lead-ups to historic events, such as the meeting with North Korea’s Kim Jong-un in the DMZ, by themselves will be invaluable. That episode, incidentally, was precipitated by a tweet, although Trump said it was Kim’s idea. “All “risky theatrics, in my view, not substance,” Bolton tells us.

Bolton is not a graceful writer, but he’s a clear, competent one and, occasionally, a witty one. Of course, the telling is slanted toward what Bolton thinks should have happened, and oh the pity it didn’t. No sin in that. Such defines the genre.

Although Bolton’s exasperation often is obvious, there’s relatively little of the score-settling almost requisite to political memoirs. When it turns up, it’s most often as an aside: G7 meetings are like “self-licking ice cream cones.”

He is a master at pointing out inadvertently funny or ironic situations without saying, “Can you believe this?” Trump, at a banquet in Japan, remarks that Prime Minister Shinzo Abe’s father, a kamikaze pilot during WWII, was disappointed he hadn’t succeeded in that role. Writes Bolton: “If he had been, Abe, born in 1954, wouldn’t exist. Mere historical details.”

During the same visit, the president had trouble staying awake during a meeting with Abe. “He never fell out of his chair…but he was, in the immortal words of one of my Fort Polk drill sergeants, ‘checking his eyelids for pin holes.’”

Bolton does throw a few serious punches. Many are directed at then Secretary of Defense James Mattis, who, in his telling, slow-walks presenting military responses when the president (and Bolton) asks they be among a range of options. Mattis delays “to the last minute, to have things come out as he wants.” Mattis, he continues, is “a classic bureaucrat” who plays with “marked cards.”

John Bolton has been in public life for four decades. As the saying goes, takes one to know one.

His job, Bolton says, was “like making and executing policy inside a pinball machine, not the West Wing of the White House.”

Throughout the book, Bolton makes no secret of his growing disdain for the way this White House operates, or for the man in charge. He does it by building detail upon detail to show us what was going on, and using Trump’s own words.

That said, the best-known hawk of his era doesn’t often disembowel. A pity, really. Such moments keep the pages turning.

Bolton is wicked smart and blessed with a prodigious memory. Unfortunately for readers, he also is like the storytelling uncle who drifts off into so much backstory and trivia that you want to hurl the gravy boat at his head. The same myriad layers of observation that will make historians giddy drove me to mutter out loud, “Get on with it! I don’t care about the 11 phone calls you made before noon on Tuesday!”

But all those layers do pack a wallop. What is most striking about The Room Where It Happened is how the weight and volume of what he tells us, the names of people present, what they said, what President Trump and his highest-ranking minions said and did, what happened as a result — witness multiple reports here and abroad — eventually outrun Bolton’s own bona fides.

Whether or not Bolton is motivated by self-justification, and whether you were a hawk or a dove when you picked up the book, become irrelevant.

We can only guess how his testimony before Congress would have gone. On the whole, the testimony in this book is convincing. (The ideologue in either direction will, of course, disagree.)

It’s a tough read. In his ending remarks, Bolton notes that the action government censors most often mandated was “take out the quotation marks.” Generally, doing that was enough to satisfy them. The actual words attributed to people stayed the same. One can discern a little glee as Bolton complies, so no harm was done.

But graceful writing, or the lack thereof, and the graphic design of a book do matter. The Room Where It Happened can be riveting. Most often, it is not. With the sad weight of the content, plus no “he said” and “she observed” quotations to give the eye relief as long, grey paragraphs march across the pages, there were times I pushed myself to keep reading.

But worth it? You bet. Of all the Trump-era tell-alls to date, this one is a gut punch.