The Republic of Violence: The Tormented Rise of Abolition in Andrew Jackson’s America

A propulsive account of anti-slavery crusaders in the early 19th century. 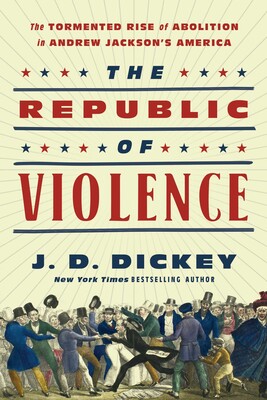 Abolitionist William Lloyd Garrison declared in the first issue of his newspaper, the Liberator, “I will not retreat a single inch and I will be heard!” He was indeed heard in his lifetime and subsequently by historians, particularly Henry Mayer in the sizable biography All on Fire. In The Republic of Violence, author J.D. Dickey looks at the abolition movement beyond the cantankerous Garrison and instead focuses on those early abolitionists who didn’t live to see their crusade’s victory.

Andrew Jackson’s America was the “republic of violence” of the book’s title. Tellingly, Jackson’s inauguration included a drunken riot (the average American consumed five gallons of spirits in 1830), and his presidency empowered white working men through expanded voting rights and economic mobility, emboldening them to commit violence against anyone deemed a political or social enemy.

More than a thousand people were killed in riots before the Civil War, with unquantifiable damage being done to homes, churches, schools, and civic institutions in the process. In 1834 and 1835, there were at least 50 incidents of mob violence targeting everyone from Democrat and Whig poll workers to hot-air balloonists. Yet free Blacks and abolitionists were most commonly the targets of these mobs. White Northerners — who often profited from slavery as much as their Southern counterparts did — were frequently incited to violence by newspapers that warned free Blacks would take their jobs and “amalgamate” the races.

Colonization schemes at the time showcased early-19th-century racist thinking. Advocates endorsed programs that shipped Black people to Sierra Leone and Liberia on the assumption that there was no benefit to having a free Black population in America. Black activists, however, refused to leave their vibrant communities in the North for the promise of Africa.

Dickey deftly portrays the tumult surrounding abolitionists’ pushback against these colonization schemes, immersing readers, for one, in a meeting of Philadelphia’s Black community that denounced Henry Clay’s claim that free Blacks were “dangerous and useless.” Those assembled proclaimed:

“We never will separate ourselves voluntarily from the slave population in this country; they are our brethren by ties of consanguinity, of suffering, and of wrong.”

Black abolitionists — who, Dickey hints, were never allowed to radicalize to the same degree as whites — drive the narrative. To wit: Readers spend as much time in these pages with Daniel Ruggles, a Black author and bookseller in New York City, as they do with Garrison. Ruggles spent nearly every cent he had on the cause of abolition and toiled relentlessly for its advancement, exhausting his health at age 28.

Beyond circulating pamphlets and newspapers that articulated abolitionist goals, Ruggles also led the New York Committee of Vigilance to ensure the protection of free Northern Blacks and fugitive enslaved people. His heroism in challenging the kidnapping of free Blacks into (or back into) slavery highlights a tension that the author unfortunately spends too little time on: the different methods of activism pursued by white and Black abolitionists.

Lest readers get the impression that all abolitionists were men, Dickey emphasizes the importance of women in the movement. For example, while James Forten, a wealthy Black sailmaker, spent decades working as an abolitionist, his efforts don’t overshadow those of his wife, Charlotte, and daughters Margaretta, Harriet, and Sarah.

Sarah Forten, for her part, published provocative poems in Garrison’s Liberator, including one that asked, “Can the name of ‘MY COUNTRY’ — the deeds which we sing — / be honored — revered — ‘midst pollution and sin?” The Forten women were also co-founders of the Philadelphia Female Anti-Slavery Society, whose petitions forced the issue of abolition into the halls of Congress. Their fundraising also built Philadelphia’s Pennsylvania Hall (later burned by an anti-abolitionist mob). But the Fortens’ wealth and social prominence didn’t protect them from — and, in fact, made them targets of — white mobs; one son was beaten, and their home was repeatedly attacked.

The 1837 mob-led murder of Elijah Lovejoy — crowned the first martyr to the cause — forced his fellow white abolitionists to confront the limitations of passive resistance. Upon Lovejoy’s death, the charismatic if irritable Garrison became the leader of white-dominated pacifistic resistance, while the Black-led Committees of Vigilance continued to think martyrdom a useless sacrifice. The book concludes not long after Lovejoy’s killing, leaving this reader hoping a future volume will see Dickey bring his lively prose to the 1840s abolitionist movement.

The Republic of Violence is not your typical chronicle of abolition, and readers are the better for it. The author’s extensive use of 19th-century source materials helps him spotlight the voices of historical actors in a way that brings the narrative vividly to life. Fittingly, the book ends with a Hollywood-esque depiction of Daniel Ruggles helping a young fugitive slave named Frederick Bailey escape to freedom. By the time the men meet again years later, that former slave has changed his name. He’s now Frederick Douglass.

Cameron Sauers is a graduate student in the history department at the University of Kentucky, where he holds a Robert Lipman Fellowship. His research centers on issues of race and gender in the 19th-century American South.