Letters to a Young Scientist

With his distinctive passion and exuberance for knowledge, the author shares his advice to future discovers. 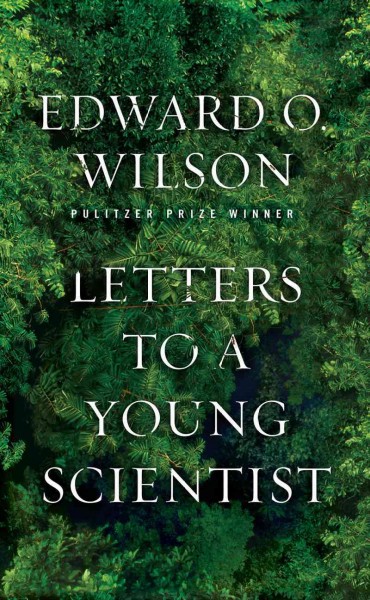 Edward O. Wilson’s Letters to a Young Scientist continues a long and important literary tradition of reflections on choosing one’s life work.Rainer Maria Rilke, the German poet, advised a young man seeking a literary career to expand his inner life and refine his judgment. Rilke’s counsel took the form of ten Letters to a Young Poet written between 1902 and 1908. More recently, in 2001, dissident critic Christopher Hitchens wrote to his students in Letters to a Young Contrarian and advocated a hard-edged skepticism as essential to any successful assault on contemporary hypocrisy.

Now, the Pulitzer Prize-winning evolutionary biologist Edward O. Wilson offers 20 letters designed to encourage anyone contemplating a 21st-century career in science. Common to these literary memoirs of advice is the necessity of passion for one’s subject, a robust and energetic creativity, and a willing mentor.

Perhaps because E.O. Wilson is writing about careers in science, his letters offer some unusual directives. His reflections are not limited to the would-be scientist in an ideal setting, but to any scholar contemplating a career in a competitive field, especially those vulnerable to an unforeseen sea-change of knowledge. Wilson’s counsels are both pithy and charming. To the young scientist he offers what seems to this reviewer a universal principle for creative achievement: “think like a poet” and “work like a bookkeeper.”

Reflecting on a half-century of teaching and counseling and a lifetime of inquiry into the nature of life on Earth, Wilson writes about his passion for research and exploration and how the creative imagination has worked in his own discoveries. With more than 24 books including the best-selling novel Anthill in 2010, and over 100 prizes, Wilson is one of the most driven and prolific authors and public intellectuals of our time. If offering comparisons to his own spectacular career might appear egotistical, Wilson should be forgiven as he has accomplished more than most of us consider humanly possible in one lifetime. His modest objective in these letters, and in the distillation of pithy “Wilson’s principles” which are scattered throughout, is to encourage talented scholars, even those who find themselves “a bit short on mathematics,” to enter scientific disciplines of every sort because “the world needs you — badly.”

Wilson’s 20 letters are divided into categories including the need for passion in finding a path, what a life in science looks like, and the need for theoretical thinking on a grand scale.  Throughout Wilson scatters autobiographical vignettes which give the letters a deeply personal quality. He gives generous credit to his own mentors, such as William L. Brown, and to his many collaborators including the late Robert H. MacArthur, while encouraging young scientists to risk working on the frontiers of science and to “acquire breadth and use imagination in all its applications to form new theories, new concepts.” As he likes to observe, “Fantasies are the fountainhead of all creative thinking. Newton dreamed, Darwin dreamed, you dream.”

While Wilson’s second letter, which encourages those who might be frightened away from a career in science because of a lack of mathematical skills, is pedagogically sound, it presumes a sort of fearlessness and innate brilliance that might intimidate lesser intellects. That he finally learned calculus as a Harvard professor at 32 in an undergraduate class which included some of his evolutionary biology students brings applause, it may not convince all readers that they could achieve the same success.

That said, Wilson speaks compellingly and humbly of how he worked to create such new fields as sociobiology and island biogeography, and how he endured controversy and criticism. Here he continues to argue for a synthesis of the sciences and humanities which will expose new problems for scientists to solve, particularly in the area of the natural environment where he believes the greatest opportunity exists for significant discovery.

Perhaps the most surprising and compelling of Wilson’s principles is his advice to break out into a field not yet popular where the potential for discovery is always the richest. “Go where the least action is occurring. March away from the sound of guns,” he writes as Wilson’s Principle Number Three. “Observe the fray from a distance, and while you are at it, consider making your own fray.” Search for the problem, he counsels, because the more difficult it is, the more likelihood there is of an important solution.

Written with his own distinctive passion and exuberance for scientific discovery, Wilson admits “I have never changed.” It all began with ants and for Wilson, who has become the world authority on myrmecology, his explorations will undoubtedly end with new theories about ants. From his first encounter with these insects as an adolescent looking into a rotted tree stump in Alabama, to his recent discovery of a new species on remote islands in the South Pacific, the possibility of adding to the encyclopedia of life has kept him dreaming and discovering.

Letters to a Young Scientist contains sound counsel to all those who wish to discover what the future of life on Earth might look like; but the book is especially relevant to those who would dream the dreams and walk in the footprints of E.O. Wilson.

Linda Lear is an environmental historian and the author of Rachel Carson: Witness for Nature (2009) and of Beatrix Potter: A Life in Nature (2008). Disclaimer: The reviewer has had a professional acquaintance with E.O. Wilson over the course of a decade.