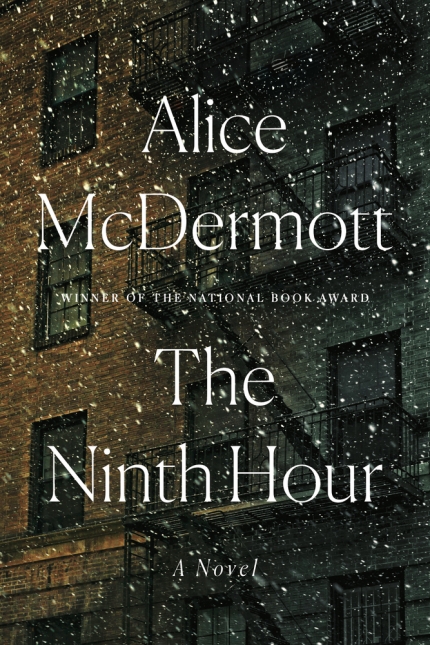 Novelists are often drawn back to the same time and place again and again in their work, to an emotional geography that formed them as people and as writers. For Alice McDermott, that place is among the working-class Catholics of 1950s-era Brooklyn and Long Island. Her work consistently involves the quietest stories focused on lives of little note.

In the Catholic canon, the Liturgy of the Hours, such as vespers and lauds, marks the time of day for certain prayers; none, the ninth hour of the day, 3 p.m., is the time for mid-afternoon prayers. It is around that time on a cold and rainy February day that a young man sends his pregnant wife out to do the marketing so that he can close up their tiny apartment, kill the pilot light, and lie down in the bedroom for a permanent nap.

We see the aftermath of the explosion and fire through the eyes of neighborhood nun Sister St. Savior. Despite her desperate need for a toilet after a day spent begging at the Woolworth’s for the Little Nursing Sisters of the Sick Poor, the nun walks into the house rather than pass by, and immediately takes matters into her capable if arthritic hands.

Thus begins the story of Annie, the new widow, her daughter, Sally (christened St. Savior), the nuns of the convent of the Little Nursing Sisters, and the various characters that inhabit their work-weary neighborhood.

As unassuming a writer as McDermott is, she sometimes surprises readers with her willingness to break rules. In her 1998 National Book Award winner, Charming Billy, she got away with using a first-person narrator for a closely told story, the bulk of which took place before the narrator was even born.

Rebel McDermott is here again, this story narrated by an even more captivating “we,” signifying the children of Sally and her husband, Patrick Tierney, who grew up together. The Tierney children — how many? boys? girls? — tell this story in intimate detail, describing their grandfather’s last solitary moments, Sister St. Savior’s internal considerations of God, and countless other hidden moments. It’s a delicious little twist of narrative expectations that McDermott pulls off effortlessly.

The story unspools gradually, alluding to certain incidents and episodes, returning to them, adding flavor and depth at each pass. Sally and Patrick’s children recount the stories they grew up hearing. That their grandmothers, Annie and Liz, were fast friends from before their parents were born means the stories of the two families bleed into each other to become one.

Many of the stories involve the residents of the convent of the Little Nursing Sisters of the Sick Poor — primarily Sisters Lucy, Illuminata, and Jeanne — women who understand what needs to be done and simply do it. They are by necessity practical and tough, and have few saintly illusions about life. Their devotion to God is primarily manifest in the unceasing labor they pour into easing the suffering of others.

If Lucy is brusque and unsmiling while Jeanne’s eyes twinkle perpetually on the brink of laughter, both women prove themselves equal to any task, starting with making Annie’s apartment habitable again and finding the money to employ her to help Illuminata with the convent’s mending and washing. They also see things clearly, including the developments between Annie and the convent’s milkman, Mr. Costello.

Sally grows up in the warm embrace of Annie, the various sensibilities of the convent nuns, and the messy, tumultuous household of Liz and Michael Tierney and their six children. Sally and Patrick knew each other from infancy, and in Patrick’s stories they were destined for each other.

One of Patrick’s favorite stories involves Red Whelan, Aunt Rose, and the lasting enmity between his father and grandfather, for whom young Patrick is named. The Tierneys paid Red Whelan to take the elder Patrick’s place in battle during the Civil War.

When Red came back missing an arm, a leg, and an ear, the Tierneys bestowed on him permanent residence in their third-floor bedroom, and their young daughter Rose to be his lifetime caregiver. So much given to ensure the future of a son on whom all hopes rested. As Aunt Rose later said, “Weighed down all his life by the burden of gratitude.”

Hence the bitter and permanent break between father and son when young Michael, carelessly throwing away a generation of advancement that came at such a cost, insisted on marrying a mere immigrant servant girl — Liz.

The final insult, in the end, is that Red survives the old man. “I wonder if it irked my father, to see Red Whelan outlive him,” Michael tells Patrick. “I wonder if he thought, as he lay dying, that perhaps for three hundred dollars more Red Whelan would take his place again.”

Sister Jeanne tells the children stories, too, in her old age but still with a twinkle in her eye, discussing with them the ideas of God’s sense of fair play and the joys of Heaven, something she is certain will be denied to her. How sweet, stalwart Jeanne could permanently be out of God’s grace is the central mystery of this story, while the reader’s central question, for her and several other characters, is, “Was it worth the price?”

McDermott, the master of understated storytelling, leaves us to ponder the answer.