The Happiest People in the World: A Novel

Thin characterizations are overwhelmed by plot twists in this tale of a Danish cartoonist in hiding. 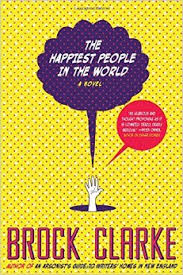 Brock Clarke’s The Happiest People in the World opens with a surreal scene in the Lumber Lodge bar in upstate New York in which all the patrons revel in drunkenness, then collapse on top of one another on the floor, laughing — or so it seems from the point of view of the moose head mounted on the wall with a camera hidden in its eye.

Clark imagines the entire first chapter from the animal’s perspective, establishing a weirdness and a remote psychic distance from the characters that he maintains throughout the novel. Clarke creates a world in which nothing is at it seems — and where a stuffed head has a legitimate point of view.

The story of what actually happens on the night of the moose’s imagined observations unfolds over the rest of the novel, beginning with cartoonist Jens Baedrup, resident of Skagen, Denmark, who finds himself in danger after drawing a controversial cartoon featuring the Prophet Muhammad.

After arsonists burn his house, Baedrup’s death is faked and he receives CIA protection. With the new identity of Henrik Larsen, a Swede, the cartoonist relocates to Broomeville, NY, where the rest of the book’s convoluted plot — involving a cast of characters with multiple identities — grinds forward to a final gruesome yet absurd scene in the bar where the book opened.

Unfortunately, the novel favors plot twists over character development, so the most dramatic scenes have little emotional impact, leaving the reader disconnected from the characters. Clarke offers commentary on our contemporary society, and our neurotic preoccupation with security, but the message feels flat without personalities who live on the page.

The book’s title refers to the Danes, said to be the happiest people in the world. The cartoonist, who in the U.S. becomes a high-school guidance counselor, is, arguably, among the happiest.

He has “unshakable optimism.” His favorite statement is “Everything is going to be just fine,” which he says repeatedly in the face of various calamities. Henry — as the cartoonist is now called — is another of the guileless protagonists in which Clarke seems to specialize. His Sam Pulsifer of An Arsonist’s Guide to Writers’ Homes in New England, Lamar Kerry Jr. of The Ordinary White Boy, Miller of Exley, and Henry all share a certain naiveté.

The protagonists in Clarke’s earlier novels elicited some degree of empathy from the reader, but not Henry. If he can’t see the sorrow in his own life, the reader struggles to care about him one way or the other.

The best parts of the novel offer brief insights that reveal American idiosyncrasies from a foreign perspective or give us a glimpse of Denmark. For example, during his first ride in a pickup truck in Broomeville, “Henry learned several things. That once Americans were out of the cold and in their trucks, they did not like to get back out into the cold...that American weathermen liked to refer to snow as ‘the white stuff’...that American sports talk radio announcers liked to say about something, ‘There’s no doubt about it,’ before then expressing their many doubts about it.”

At the end of the story, the action returns to Denmark. Matty, the principal of the school at which Henry worked in New York, arrives in Copenhagen and takes in the sights: “As far as he could see, Copenhagen was gloomy and beautiful. It was a very northern kind of beauty. Once in a while a shaft of sunlight would break free of the black clouds, and when it did, you could really appreciate how dark and gloomy everything was.”

Clarke offers keen and memorable observations and descriptions of places — especially as seen through a foreign eye — which will leave a more lasting impression than the story and characters.

Yelizaveta P. Renfro is the author of a book of nonfiction, Xylotheque: Essays, and a collection of short stories, A Catalogue of Everything in the World. Her fiction and nonfiction have appeared in Glimmer Train Stories, North American Review, Colorado Review, Alaska Quarterly Review, South Dakota Review, Witness, Reader's Digest, Blue Mesa Review, So to Speak, and elsewhere. She holds an MFA from George Mason University and a Ph.D. from the University of Nebraska.