This collection is not for the young or faint of heart — and ornithophobes should skip it, too. 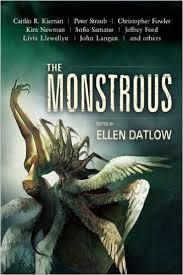 With horror stories, you never know how they're going to end, but it's always a relief when they do. The Monstrous, a collection edited by Ellen Datlow, contains 20 ghastly tales. Some are famous. Others should be.

Caitlín R. Kiernan's "The Beginning of the Year Without Summer" is foremost in this collection for demonstrating how evil humans are because of what they conjure. Ornithophobes beware: Birds feature heavily and creepily in this tale. They leave feathers behind in rooms with closed windows.

Kiernan's sinister conjurers are in good company. The Old Man in A.C. Wise's "Chasing Sunset" is worse than the Cthulhu mythos denizens he calls upon. The Old Man isn't ready to die, and he'll use his powers to be born anew, even if it means taking over a body that isn't his.

For the creatures that want to be conjured, humans can do little to stop them — but staying out of abandoned tombs designed to foster blood sacrifice seems like a good place to start. The characters in Gemma Files' "A Wish from a Bone" aren't smart enough to know that. They have a documentary to film and the right number of tomb-bound people to reassemble a most unexpected evil creature sundered ages ago.

"Down Among the Dead Men," by Gardner Dozois and Jack Dann, is a classic with a backdrop that never loses its relevance. One Holocaust concentration camp prisoner is not what he seems. He's a vampire. With the war nearing its end, the deceptions the vampire fostered are revealed to a man who recognizes the creature for what he is.

This is a collection for adults. If the aforementioned Holocaust story doesn’t make that clear, Livia Llewellyn's "The Last, Clean, Bright Summer" will. In it, teenaged Hailie journeys north along the shore with her parents. It should be like any other boring summer. Instead, it's the summer Hailie learns the secret of who she is and who her parents are. Shocking violence lurks at the core of this tale, which is also something of a mystery. Hailie's world might be this one, or it might be a parallel place. The presence of fantastical creatures is no guide. Yet despite what happens to Hailie, she holds out hope for her future.

Fantastical monsters are only plausible because human ones exist. Mrs. Asch in Peter Straub's "Ashputtle" is the best teacher around. She's the kind of primary-school instructor whose students come back years later and thank her for everything she taught them. Mrs. Asch is very particular about whom she kills. Parents never suspect her, and they probably never will.

Adam L.G. Nevill's "Doll Hands" is populated entirely by human monsters. This is The Monstrous' only tale clearly set in the future. It's a bleak world in which the moneyed elite rule and abuse everyone else. Most people have substantial genetic deformities and limited lifespans. The underclass knows the elite's penchant for human flesh is wrong, but doing something about it means death to everyone. Vividly drawn, "Doll Hands" is a spiritual cousin to Anne Washburn's “Mr. Burns, a Post-Electric Play,” but without a hint of redemption for society.

The Monstrous is not without lighter stories. Of course, levity sits just atop all the evil, murderous layers. "The Totals," by Adam-Troy Castro, asks the question: "What's the ultimate reward for being the best killer on the planet?" The answer doesn't disappoint.

Sofia Samatar's "How I Met the Ghoul" is one reporter's interview of a horrible, lovely, strange, and flippant creature. The reporter notes that the ghoul "had a nice laugh, like an electric mixer making a cake in a distant apartment…She said she liked planes, she didn't make many of them go down."

Scottish folklore gets a spotlight in The Monstrous with two soil-rich stories. In Brian Hodge's "Our Turn Too Will One Day Come," human-suckled yird pigs are helped across the Atlantic to aid a New World family. Feeding yird pigs on buried human flesh is apparently not too great a price for their assistance.

In John Langan's "Corpsemouth," the great wizard Merlin conjures a most terrible creature from the soil. Unfortunately, modern planning authorities don't understand the importance of keeping a binding stone in place when the world wants more apartment buildings. Worse, Corpsemouth doesn't know how to go home when his job on Earth is done.

This is a solid horror collection that pulls old creatures and new ones into the genre. Only a very few stories in The Monstrous are hard for the casual reader to follow. When that happens, the disconnect seems most related to nontraditional narrative voices, like the child in "Catching Flies" by Carole Johnstone or another child in "Miss Ill-Kept Runt" by Glen Hirshberg. The monstrosity of the tale is always obvious. Second readings clear up any confusion.

The stories in The Monstrous are intense, with unsettling imagery that persists long after each one ends. This collection has something disturbing for everyone.