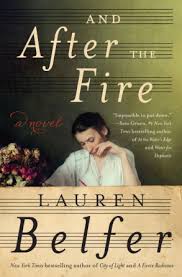 As anyone who has ever performed in a band, watched an opera, or simply played their favorite song on endless repeat knows, music holds a special place in the human heart. A few melancholy chords can send sadness cascading through our veins, while a high-school playlist can unleash a flood of nostalgic memories. In And After the Fire, Lauren Belfer deftly weaves the power of music throughout the distinct, but increasingly intertwining, lives of several women and men — some fictional, some historical figures.

Although the main character in Belfer’s third novel is a young woman, Susanna Kessler, it would be more accurate to say the book revolves around two entities: Susanna and a long-lost cantata by Johann Sebastian Bach, which Susanna’s uncle took from an abandoned house in Germany while serving as a soldier during World War II.

At first, it seems as though the only questions Susanna must confront when she discovers the cantata after her uncle’s death are who legally owns it and, if she does, what to do with it. But when she consults grieving widower and Bach scholar Daniel Erhardt, she discovers that the cantata’s text is disturbingly anti-Semitic and even violent. Daniel, a Christian, and Susanna, a Jew, struggle to reconcile their love of Bach’s music with their discomfort over his endorsement, if not outright encouragement, of such language.

Belfer thoughtfully dissects these emotions. Dan reflects that, growing up in small-town Wisconsin, “He’d heard the doctrines repeated in church and in his parochial schools, but he hadn’t reflected on their meaning.”

Susanna strives to determine the best course of action to take with this undeniably beautiful but complex masterpiece. “She could easily destroy the manuscript Henry had left her, if she decided this was the best option. Apparently (if authentic) it was a great work of art, but it was also a product of a dismal tradition that had brought lethal consequences for her forbears.”

Interspersed with chapters set in Susanna’s present-day New York City (chapters that increasingly involve Dan as their discoveries bring them closer together) are stories that recount the history of the cantata, tracing its provenance from Bach’s son, Wilhelm Friedemann Bach, to Susanna’s uncle.

These interludes — filled with history, gorgeous descriptions of music, and people both real and imagined who are coming to terms with the rising anti-Jewish sentiment ravaging Prussia in the 18th and 19th centuries — are a pleasure to read. Readers will enjoy learning the life story of Sara Itzig Levy, a historical figure and Jewish music student of Wilhelm’s who becomes the uneasy guardian of the cantata after Wilhelm passes away. They also will sympathize with her as she, like Susanna, worries about how best to proceed after it is given to her.

In an emotionally fraught conversation with her fiancé, Samuel, Sara struggles to understand why her teacher has entrusted, or perhaps burdened, her with this composition. “Why did he bring this to me?” she asks. “Is he punishing me for being myself?”

Samuel raises an interesting point about the provenance of works of art with complicated backstories: “How would we feel if he hadn’t given it to you? If it were performed after his death and were to give an angry preacher a powerful way to breed contempt and possibly even incite violence?” Such astute questions mirror Dan and Susanna’s reflections on the cantata. In using music as a unifying thread, Belfer shows that we are not immune to the prejudices of the past; we continue to grapple with similar moral dilemmas today.

In contrast to Samuel and Sara’s contemporaries, the supporting cast of characters in Susanna’s story seems awkward and stilted. When Susanna tells her friend Miriam she enjoys living next to seminary grounds because she feels safe there after having suffered a vicious attack years previously, “Miriam [studies] her with a frown of suspicion. ‘No place is safe. Not forever. Not completely.’”

This exchange gives the impression that Belfer is trying to imbue each conversation with deeper meaning, but it seems an unrealistic, if not unkind, response to someone who has been the victim of a violent assault and is seeking a return to normalcy. Similarly, Susanna’s interactions with an arrogant manuscript expert who hopes to authenticate the cantata as he simultaneously antagonizes and flirts with her feel forced and needlessly dramatic.

In a more compelling and natural storyline, Belfer uses Susanna’s increasing investment in the cantata to acknowledge that the future may not ever be completely free of the past. As Susanna delves deeper into the history of the manuscript, she feels compelled to research her own Jewish ancestors, who she knows lived in Germany before World War II and were likely murdered.

In one of the most moving exchanges in the book, Susanna prods her mother for information, only to be vehemently stonewalled. “You think the war is over, Susanna?” her mother finally explodes. “It isn’t over. Don't you understand why so many of the survivors don’t want to talk about it? Oh, yes, the fighting stopped and everybody declared peace, but the war, what it did to people, goes on and on and still hasn’t stopped and probably won’t ever stop. Look at you, seventy years later and you’re still asking questions.”

It is certainly true that we may never stop asking important, difficult questions about the past and about the complicated histories of beautiful works of art and literature. If we are lucky, Belfer won’t stop writing about those questions — and looking for answers — either.

A Fist or a Heart

An eerie, fractured story of trauma, art, and relationships.